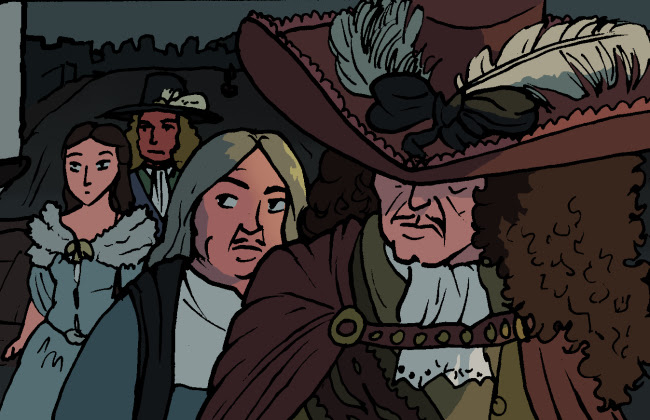 Happy U.S. Mother's Day, everyone, especially to mothers. To-day also brings a new chapter of my infrequently updated web comic, Dekpa and Deborah. Watch as Deborah tries not to embarrass herself at supper with some very important people in one of the biggest palaces in the world a few decades before it mostly burned down. Which adds some challenge to drawing its interiors, let me tell you. Special thanks to my friend Ada for translating some dialogue to German for me.

Imposter brands condition houses mute.
A turning wheel presents a faded prize.
A tea deprived of hue has ill repute.
A cake success upsets the winning pies.
A passing cap removes a bottle doubt.
Containing ships and punch the glass redeems.
A single stone defined a spinning route.
The searching clouds would rain success in teams.
A world progressed within an hour's time.
A fancy's brand of chips traversed the thought.
Rebuilding beads begat a spirit climb.
Computers built the deep and cosy cot.
A slice of ill reputed cake arose.
A seal at tea a fish would fain propose.