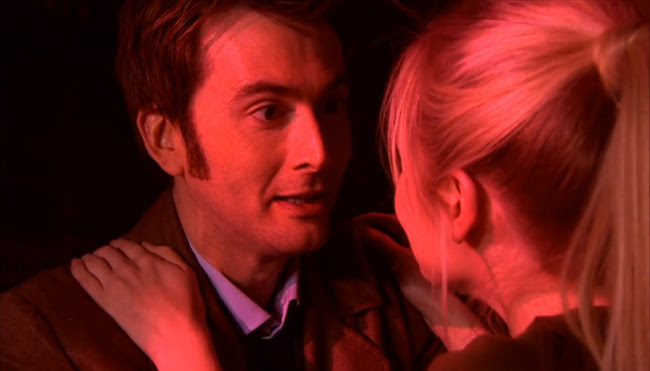 Choosing a Doctor Who episode to watch for Father's Day is much easier than Mother's Day. There are several good candidates--obviously "Father's Day" from the 9th Doctor era would be one--but I watched "The Doctor's Daughter". I think it was the second time since I first watched it. As is so often the case, it feels like a good episode that would've been a lot better in a four or five episode serial format but in this case the concept does kind of work with the rushed feeling, with wars occurring rapidly and people being created instantly to fight it. It's a good, thoughtful episode, one that nicely harkens back to classic kinds of stories.

The Doctor (David Tennant) and his companions Donna (Catherine Tate) and Martha (Freema Agyeman) exit the TARDIS amid some anonymous rubble. Almost immediately, the Doctor's grabbed by Gendry from Game of Thrones and hooked to a machine from which his DNA is extracted and his daughter is created, aged up to her early twenties, and implanted with military tactics. 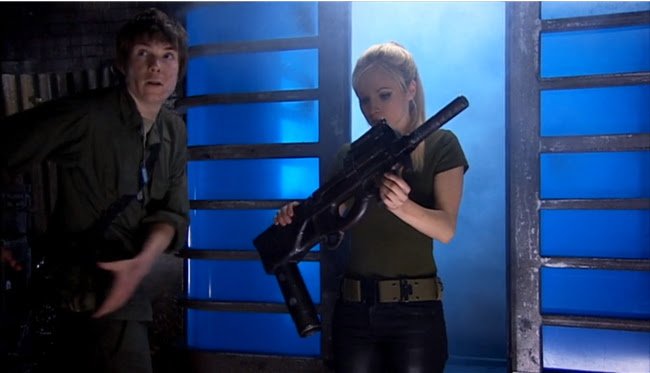 This was a couple years before Game of Thrones premièred so I couldn't have recognised Joe Dempsie, the actor who went on to play Gendry. I'd quite forgotten Nigel Terry is in the episode, though, his presence as the leader of the human faction giving an enormous sense of gravitas to the role. 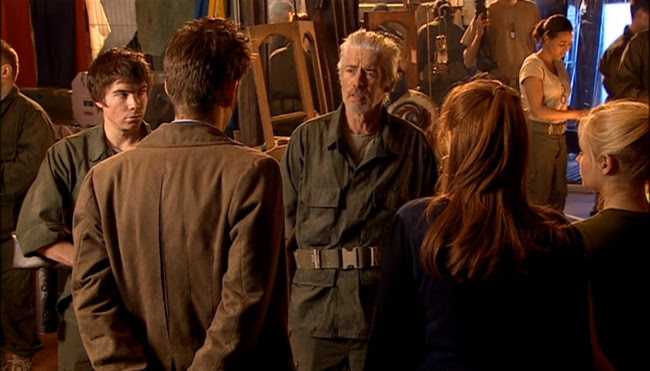 He passed away in 2015, never having quite separated himself from his role as King Arthur in John Boorman's Excalibur. I'm pretty sure he fits most people's mental image of the legendary king. He was in other things, notably The Lion in Winter and Caravaggio, but when the Doctor and Donna are ushered into the camp, my first thought at seeing the leader was, "Oh, these soldiers are in service of the rightful King of England, Uther Pendragon's son." 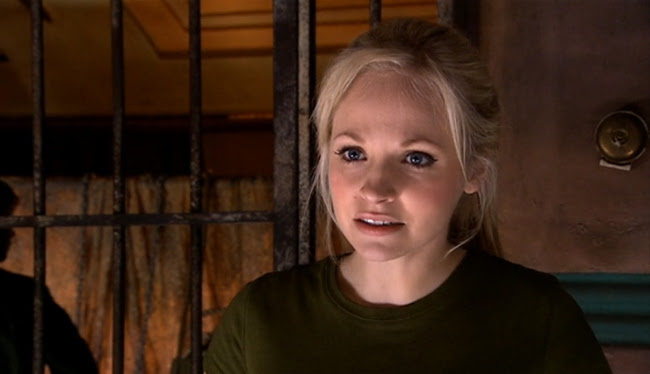 But, of course, most Doctor Who fans remember the episode for Jenny, the Doctor's sudden daughter, played by Georgia Moffett, the daughter of Peter Davison, the Fifth Doctor. And now David Tennant and Georgia Moffett are married and perhaps we're seeing the emergence of a bona fide Doctor Who dynasty. 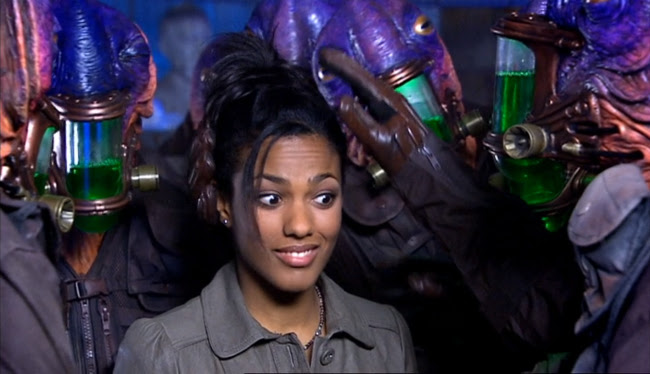 While the Doctor, Donna, and Jenny meet with the humans, Martha makes peace with the Hath, the traditional enemies of the humans on this world, a sort of fish people who seem to communicate with bubbles produced in little jars they wear clamped in their mouths. 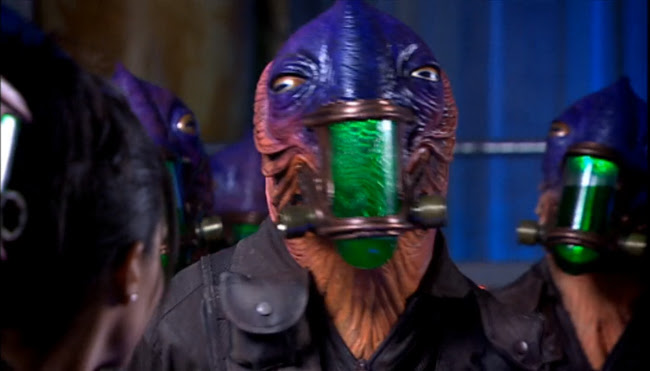 Martha understands them thanks to the TARDIS translation circuits but we don't, which is odd but maybe helps speed things along. I would've liked subtitles for them or something--not understanding them kind of takes the audience out of Martha's point of view. 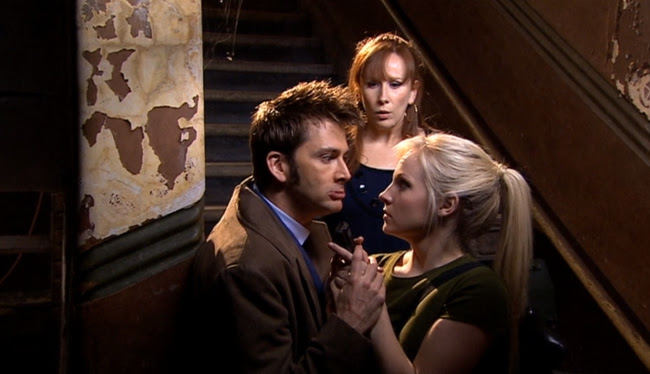 The Doctor, meanwhile, struggles with accepting the fact that he's a father again, something that Donna misinterprets as the Doctor being uncomfortable with being a father for the first time. When they find Jenny has two hearts, her heritage as a Time Lord becomes an issue in a scene that plays as an intriguing distillation of generation gap. The Doctor can't accept her as a Time Lord (or Lady, the dialogue deftly dodges the official terminology) because she hasn't any sense of the history and culture normally received by members of the species. I'm not sure if it's ever been spelled out but in other episodes I've had the impression that Time Lord (or Lady) was a title bestowed only on a particular group of Gallifreyans. That would certainly make more sense, in any case. 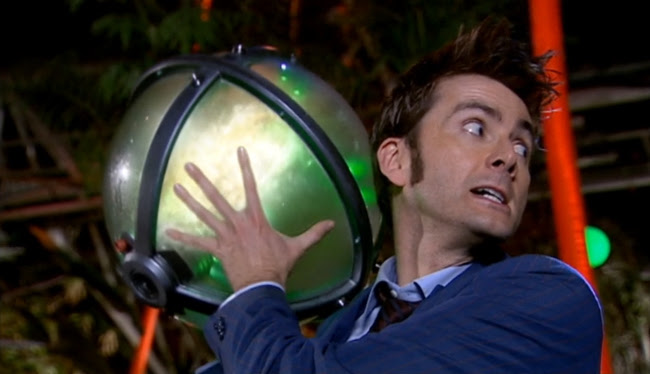 The episode climaxes in one of the many Doctor as Christ Figure moments from the Russell T. Davies era, though in this case it doesn't involve the Doctor being sacrificed but rather him demonstrating his preference not to take revenge when most people would say he has every right to. Which is a good idea but in the general rush for the episode to come to a conclusion, the Doctor essentially spells out the concept for everyone, which doesn't quite work, any more than Martha suddenly being able to say with some certainty whether Jenny really is a Time Lord (or Lady). In any case, Moffett is fun in the role and I don't understand why she's never made another appearance, particularly now that Tennant is no longer playing the Doctor so it wouldn't be weird to have his wife in the role of his daughter.

A team of fingers worked to ink a wing.
An empty tank revealed a heavy car.
Goliaths gently lift machines that ping.
A troupe of giants packed the sagging bar.
The dungeon warmth would welcome wayward strays.
A treasure piled 'neath the stone awaits.
The rock reflects a warning sound for days.
Adventure greets the dice determined mates.
The stairs were etched in pliant plaster walls.
The hottest places fell beneath the shade.
A tinny beam returns for urgent calls.
In seas of pudding soldiers stoutly wade.
Returning tea would taste of diff'rent spots.
An empty room was filled with chatty bots.