The Man's World of Spacecraft Commentary 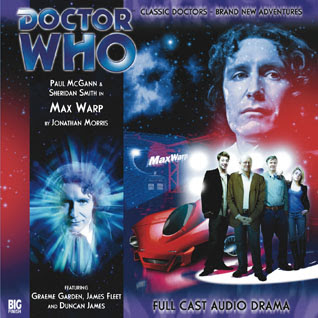 If there's one thing I learned from the 2008 Doctor Who audio play "Max Warp" it's that its writer, Jonathan Morris, really hates Geoffrey Vantage. Who's Geoffrey Vantage? A fictional character made up for this 54 minute Eighth Doctor audio play who constantly makes sexist comments about the Doctor's companion, Lucie, complains about foreigners, and gripes about political correctness. There's a plot about a diplomat being murdered and a president named Varlon who finds herself in a tricky situation, clearly more in need of nuanced thought than Vantage's two dimensional perspective could accommodate. But by the time my brain was even registering that a murder had occurred, the Doctor was already explaining the solution and the programme was over. There are some entertaining moments and I particularly liked Lucie getting impatient with the Doctor's sudden enthusiasm for different kinds of space craft. But mostly the show just left me puzzled as to why writer Jonathan Morris hates Geoffrey Vantage so much.

Of course, it turns out that Vantage is based on Jeremy Clarkson who, at the time of the audio play's release, was still host of Top Gear. I'd never seen Top Gear and knew practically nothing about Jeremy Clarkson. That's the peril for a writer making cultural references. I didn't think anyone could be really like the caricature Morris presents but I started looking for clips and articles about Clarkson and, as I suspected, though expressing some extremely right wing opinions about the military and women (though he is surprisingly against Brexit) he's also genuinely funny unlike the dull hate receptacle who hosts Max Warp, the futuristic television show about space craft. "We can't have a woman presenting. We'll be looking at the latest in atmospheric re-entry shielding and she'll be wanting to talk about her emotional problems. Before you know it the show will be all about shoes!"

The general impression I get is that while Clarkson really has strong opinions about women and international relations he deliberately exaggerates his attitude in the interest of showmanship.

It can be tricky to parody a self-parody. You have to make a certain point about underlying intention behind a broad exterior with a broad medium. Clarkson reminds me of Donald Trump a little bit--minus the ambition, which makes Clarkson a better man, to my mind. But although the comedian Graeme Garden does a decent enough impression in "Max Warp", he just can't carry the intention of the caricature.