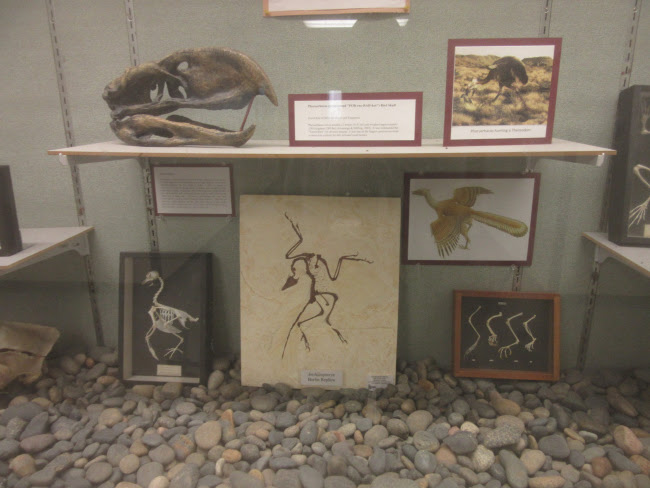 Here are some fossils I saw in a science building at San Diego State University to-day. A Phorusrhacos skull and a little Archaeopteryx. Along with the strange feeling of seeing physical evidence of a creature long extinct, seeing fossils up close makes me think about how incredible it is that these things exist at all, imagining these shapes in soil and stone over such a long, long period. Shapes that have significance to us because of how we think about life and death but are just more stuff as far as all the dirt and rocks are concerned. There's no motivation to preserve these shapes for millions of years, and yet they're preserved.

I felt like reading a short story to-day so I grabbed a collection by Harlan Ellison before I left the apartment this morning. On the trolley I read a story from 1972 called "On the Downhill Side", the first story in the collection, about a couple of ghosts in New Orleans. It kind of reminds me of the first story in another collection I often pick up when I'm randomly in the mood for short stories, "White Nights" by Dostoevksy, also about two lost souls, also a man and woman, who meet by chance in the street and who talk about relationships. But Ellison's story has a unicorn and some kind of demoniac fog entities with firefly eyes. It's also about people with some kind of mixture of personality and luck who are kept perpetually alone.

Usually when people talk about great Science Fiction authors they talk about concepts, the ideas that prompt the stories--the outer space locations, the manifestation of AI, etc. But with Ellison, as with other greats, its plain and simple great writing that makes those ideas take hold. "Lizette and I were the two sides of the same coin; devalued and impossible to spend," the narrator says at one point. These imagery ideas come up in Ellison so quickly and sometimes they're figurative, sometimes they seem figurative at first and then turn out to be literal, sometimes they exist in some borderline place. The story places grave significance on the potential of a relationship between its leads--the unicorn and the woman's virginity give the story clear sexual overtones that are plainly vulgar and wistfully operatic. I would love to see this story filmed with a heavy metal soundtrack.

But the fantastic imagery doesn't merely express the physical urge, it ties it to a broader human need and the torment in the ambiguity of cause in relationships, the constant nagging thoughts about whether one pushed too hard or not hard enough. A fitting state of mind for the two ghosts who are the story's subject; what more appropriate state of mind to reflect the doom of eternally wandering a city alone?