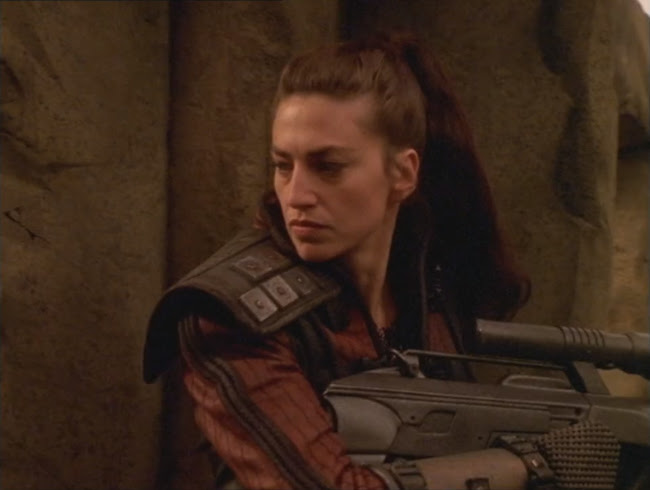 Now it's Aeryn's turn to rescue Crichton but she'll need a little help from a rival for his affections. Not that Aeryn or Crichton are at a point where they would admit Gilina is a rival or that a situation even exists where anyone could be a rival. 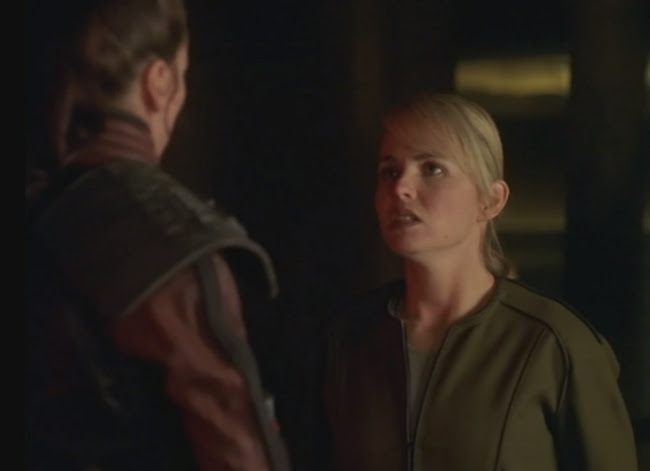 Which seems a bit silly at this point considering they seem to have already had sex and have now both put their lives on the line to save eachother. But maybe the idea of being able to take anything slow is just too appealing in their lives which otherwise seem to be constant crises. 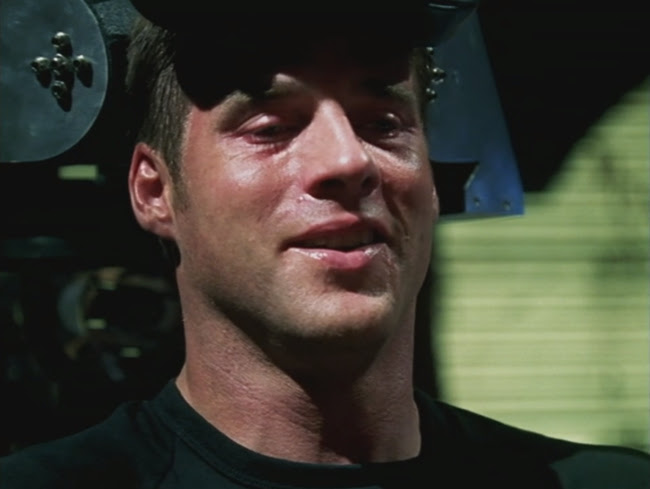 Crichton (Ben Browder) is still being subjected to torture by Scorpius (Wayne Mygram) and Crais (Lani Tupu), strapped into the "Aurora Chair", a device that painfully forces memories out of its victims and onto a little round screen. I like how the screen kind of looks like the mirror on a dentist's chair. 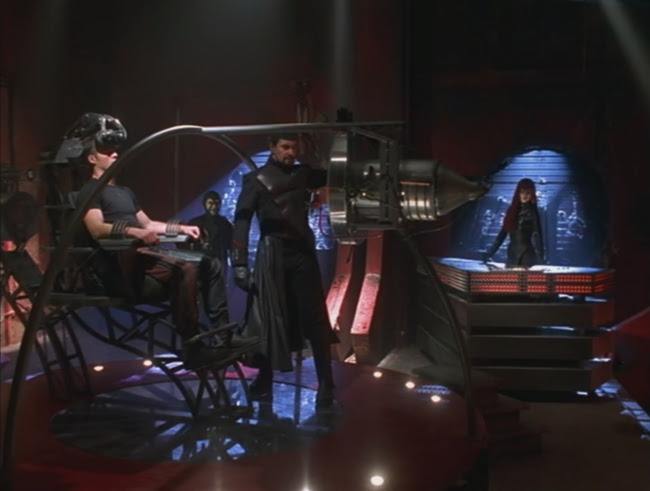 Scorpius thinks Crichton's hiding memories about wormholes but he's really concealing memories of Gilina (Alyssa-Jane Cook) who's still a PK Tech, right there on the station. And she's helping him, eventually sabotaging the chair to implant a false memory that turns out to be rather embarrassing for Crais. 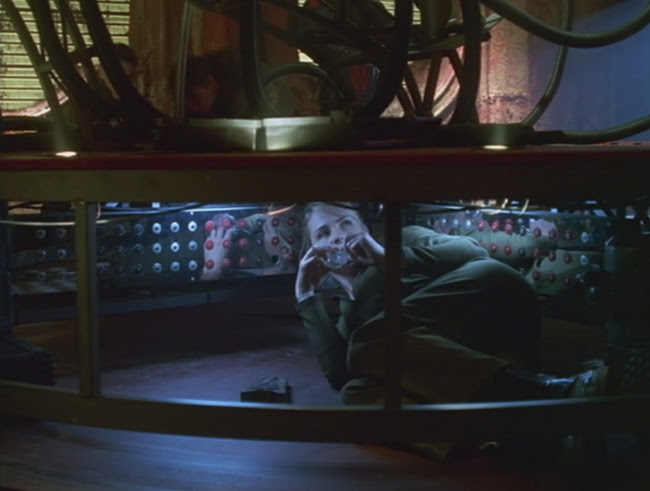 I love how deadpan Gilina is when she does it. There's no cutesy little, "Looks like Crais is in for a big surprise!" kind of line. She just solemnly delivers a clip to Crichton's brain that makes it seem like Crais is his collaborator. 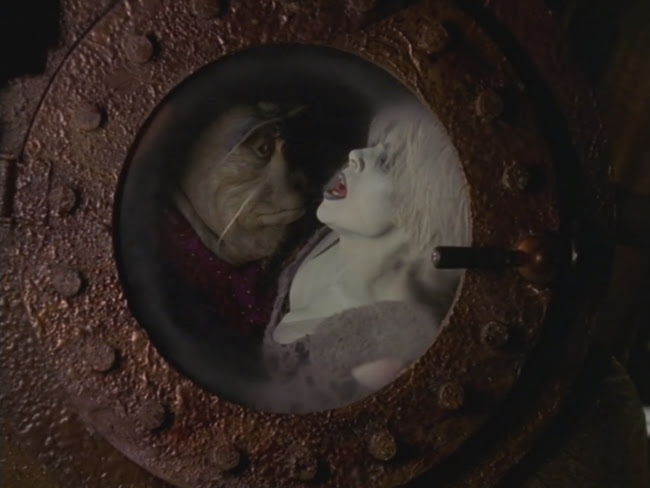 Meanwhile, Moya's finally having her baby and the only crew aboard the mother is Rygel (Jonathan Hardy) and Chiana (Gigi Edgley). After watching her be a stone cold badass in the previous episode, it's an intriguing contrast watching her complain about Rygel's farts when they're forced to huddle together in a little compartment while Moya decompresses. 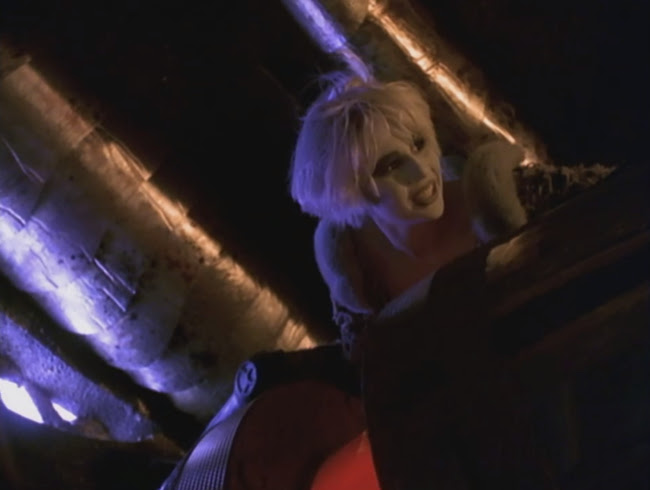 And I guess we see what we can sort of call Chiana's maternal side when defies death by cutting part of Moya while straddling a cannon. It's almost like something from Toni Morrison. 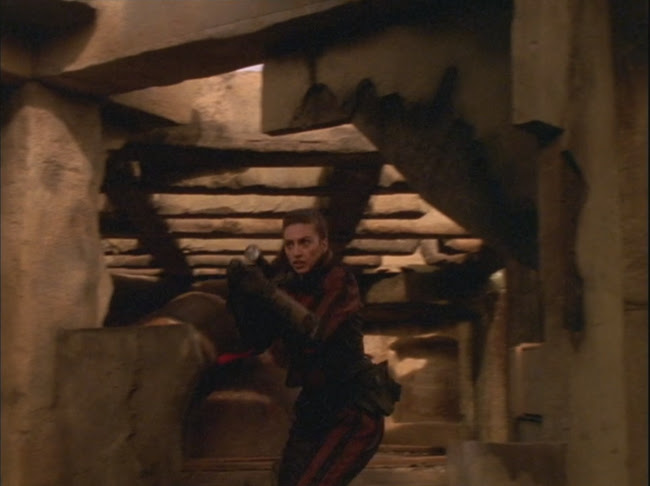 The episode climaxes with a pretty good gunfight amid some ruins. Crichton and Stark (Paul Goddard) have a temporary buddy dynamic, bonding as former prisoners of Scorpius, that they never really have again after this. Which is kind of a shame but Stark's still a good presence on the show.