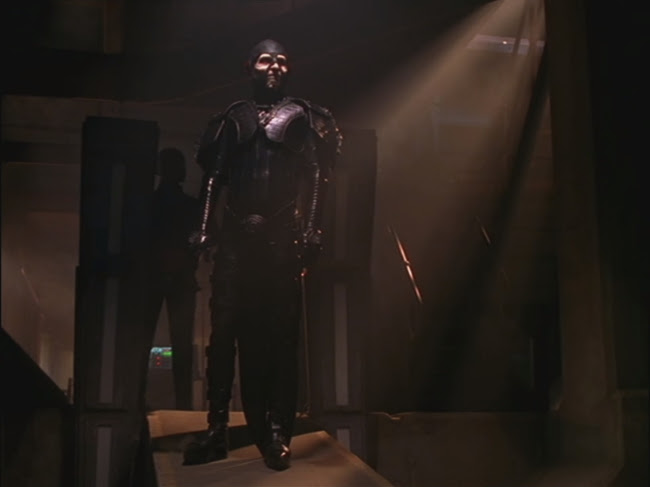 In one of the most eventful episodes of Farscape, the series' primary villain is finally introduced, familiar characters return after a long absence, and Chiana continues to distinguish herself. 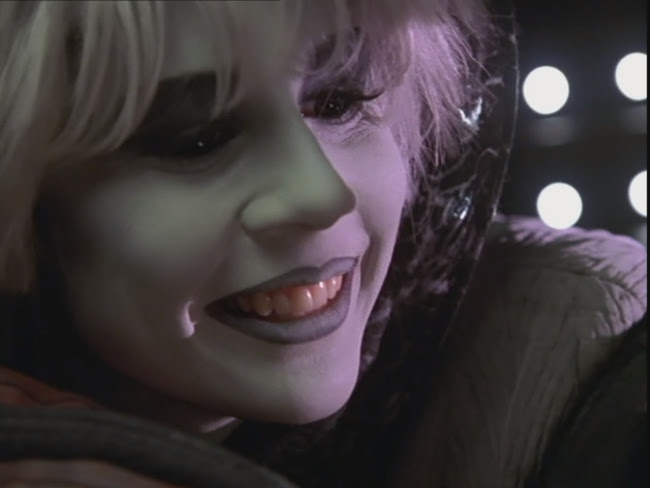 There are several Chiana (Gigi Edgley) highlights in this episode where she poses as Crichton's (Ben Browder) servant on the Peacekeeper Gammak base. She aggressively seduces everyone in the officers' lounge; she wears cute, slightly creepy, Sebacean makeup with a Louise Brooks wig; and she incinerates a guy with a makeshift flamethrower. 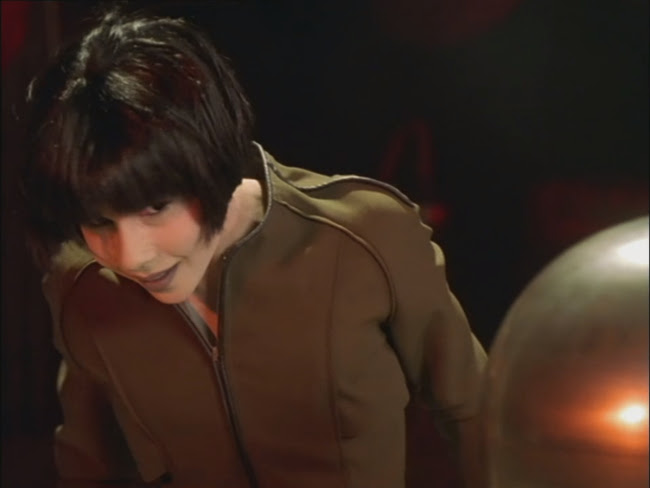 But my favourite Chiana moment from the episode is when she's in hiding with Gilina (Alyssa-Jane Cook), Crichton's returning love interest from "PK Tech Girl", twelve episodes earlier. Crichton's been unmasked as an imposter but he begs Chiana and Gilina to place priority on getting medicine back to the gravely ill Aeryn (Claudia Black) on Moya. 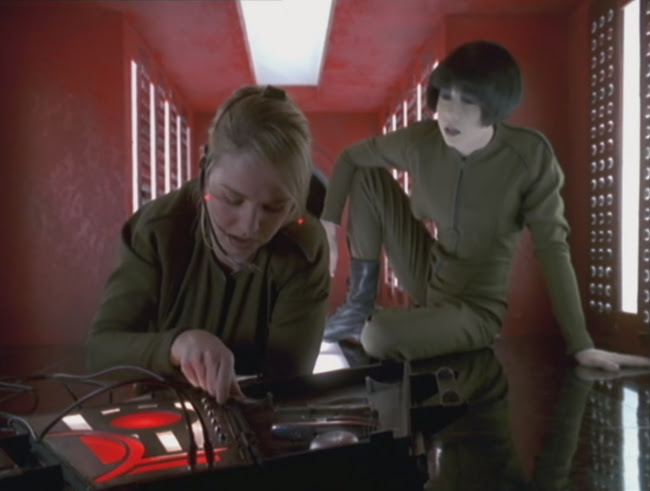 When Gilina wonders at Crichton's unshakeable focus on Aeryn, Chiana quickly assures her that Aeryn is merely a shipmate, adding, "Crichton is in love with you." I love this moment--you can see Chiana has figured out why Gilina, still an otherwise loyal Peacekeeper Tech, is helping them and at the same time she executes a plan to help insure Gilina continues to help them. But Chiana doesn't fully understand the situation so she misplays her hand, instead accidentally confirming Gilina's already growing suspicion that Crichton's now devoted to Aeryn. You can see it on Gilina's face. 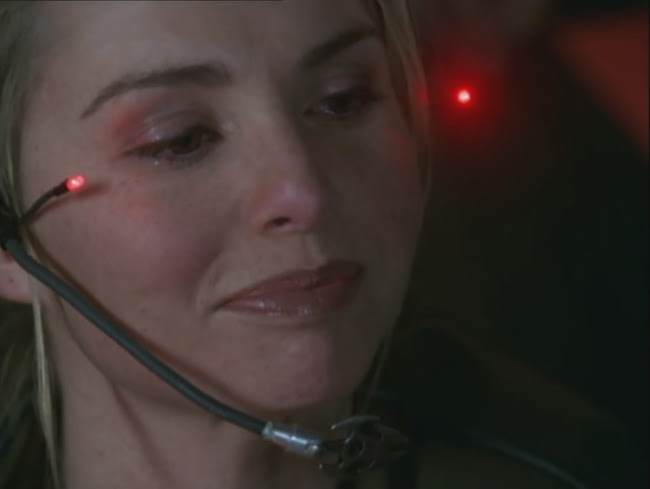 Chiana really has shown herself to be a wily burglar but she's not perfect, she's maybe a little overconfident. She makes mistakes--but not every mistake leads to disaster. 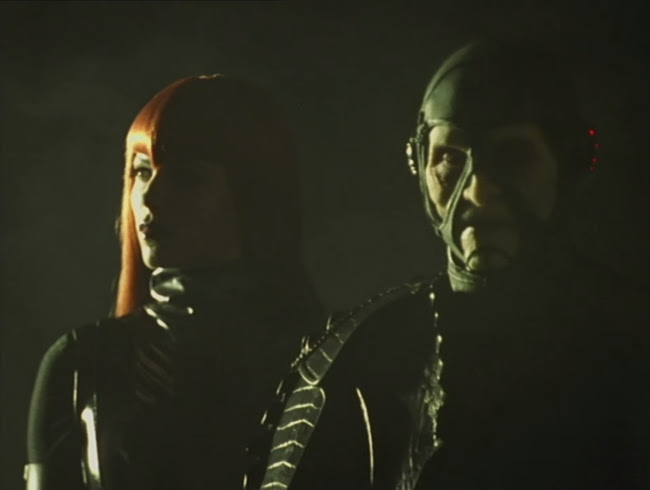 How was Crichton found out? He had the misfortune to pass someone in the hall with a keen instinct--none other than Scorpius (Wayne Pygram), the bizarre and mysterious figure heading up the equally mysterious research on the hidden Peacekeeper base. 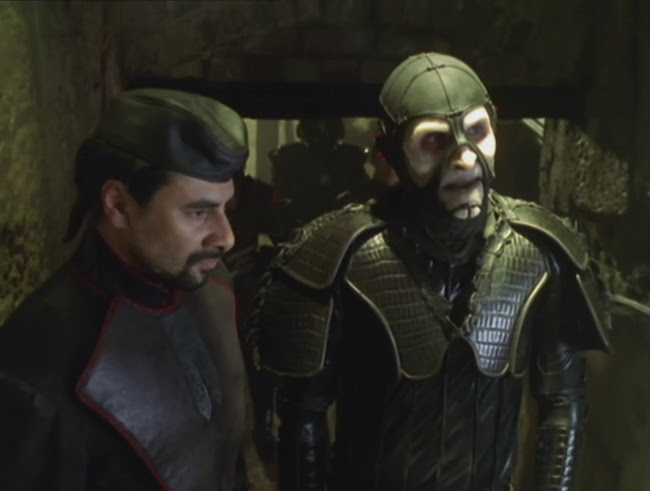 We learn a lot more about Scorpius later but at this point what we know is primarily how he contrasts with Crais (Lani Tupu). Where Crais is unhinged and unreasonable, Scorpius is cool and pragmatic. He doesn't want to take revenge, he just wants to figure out who Crichton is and why he's there. When he discovers Crichton has the very thing he's been looking for, the power to create wormholes, he's pragmatic if ruthless in his attempts to extract the information. This McGuffin, which operates for the rest of the show's four seasons, brings an effective context to the show's ideas about misfit characters needing to feel a sense of belonging somewhere while providing a dark distortion of Crichton's former passion for exploration. 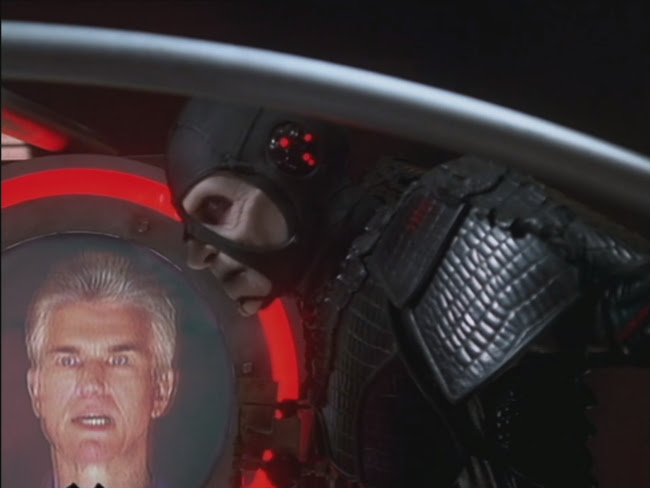 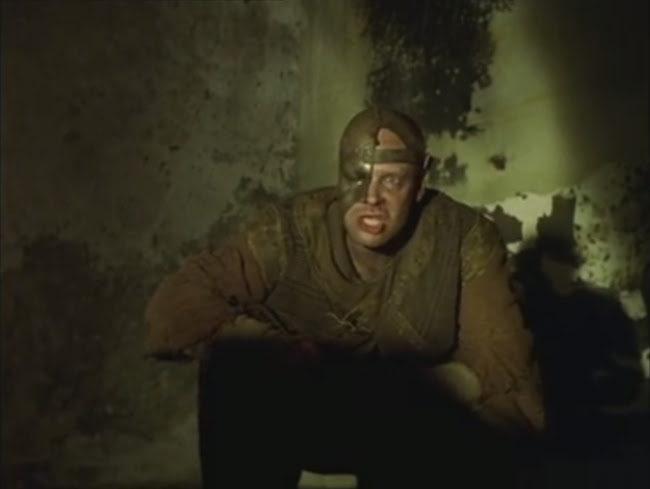 Oh, and in addition to all this, the episode also introduces Stark (Paul Goddard), another main character, though at this point he's just another mysterious mask, vigorously defining the sides of the cell he shares with Crichton. Is this demarcation of territory just the true nature of sentient need, stripped down to madness?