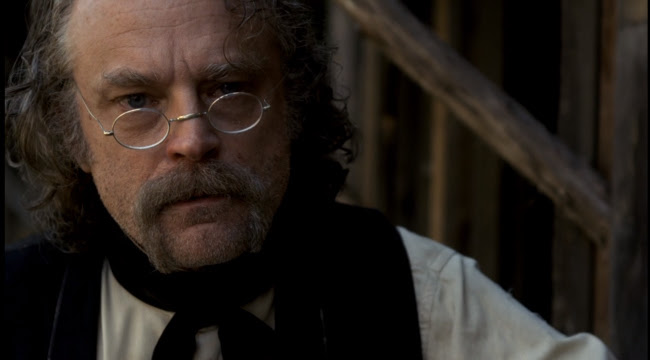 How nice to know I have so much Brad Dourif yet to look forward to since I'm only two episodes in to Deadwood. I watched the second episode of the first season last night, "Deep Water", and found his Doc Cochran has gone from being the man eerily speculating about a bullet wound to being the man fiercely protecting a wounded child. I'm starting to think a mark of good writing on a show these days may simply be the ability to show multiple sides to characters. That's what made Game of Thrones great, it's one of the distinguishing aspects of Twin Peaks. Then again, Star Trek was fine without it. I guess it depends on what kind of story is being told. 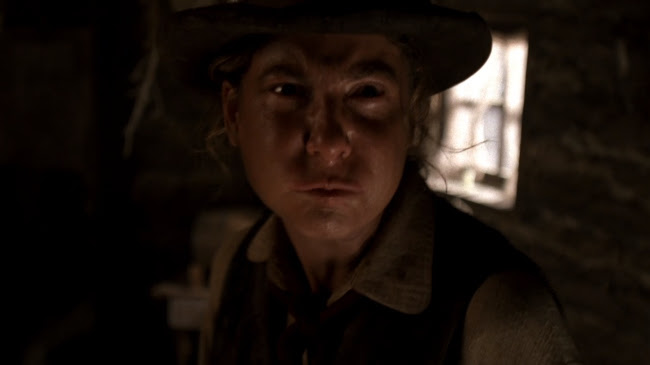 I also really loved a scene where Calamity Jane (Robin Weigert) falls apart at the mere appearance of Al Swearengen (Ian McShane) when she'd vowed not to budge from guarding that injured child. One of the things that make Westerns great is their tendency to focus on small nuances of body language and the general impressions made by voice, costume, and demeanour. Something about the way Ian McShane simply walks in the room and calmly looks at the child absolutely unnerves the resolute woman even though she knows nothing about him at this point. 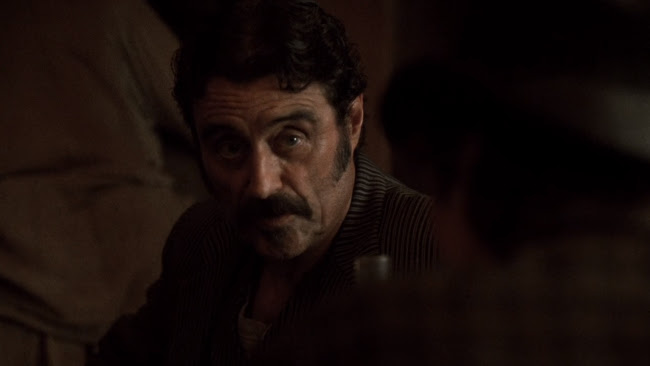 A later conversation between Al Swearengen and Seth Bullock (Timothy Olyphant) highlights how much depends on other ways of reading people and establishing trust in a town with no law. "In a camp like this, Sol, no law or enforceable contract," Swearengen explains to Seth's partner, Sol (John Hawkes), "you gotta watch a man a while before you see what his word counts for." That's the kind of thing that makes a place great to hear stories about but you'd never want to live there. Though, of course, it also kind of describes the reality we do live in. 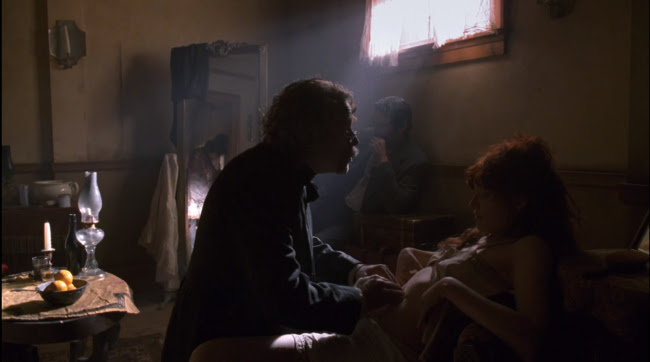 All this time and I'm only two episodes in. I don't binge, I honestly wish I could comfortably sit down and spend that much time watching a great series. But at the same time, it's nice to know I'll have this show to resort to nights for a long time.

She used to know a metal dog and cat.
In picture halls a cherry coat was seen.
Her little steps the tiles gently pat.
The castle's walls repel a mirror beam.
A clever thread and fid could bolt a door.
Across a model lane the killers stray.
Deceptive pokers raise the furnace core.
The night's repast is sweeter in the day.
The printed likeness held her arms apart.
The rolling hills provide a moving frame.
The land and all the birds for now depart.
A morning cycle writ in wicker chain.
The mountain ridge was stained with breakfast tea.
Her lunch awaits beside a tannin sea.

Posted by Setsuled at 7:24 AM
Email ThisBlogThis!Share to TwitterShare to FacebookShare to Pinterest
Labels: deadwood, television, tv show, western