Last night I dreamt I was either having lunch or sex with someone. It was one or the other, I can't remember which. For some reason I've had a lot of trouble remembering my dreams lately.

Oh, here it is. The Unborn. Huh. I guess it's a Jewish version of The Omen. Looks like it's directed by Goyer, too. It's going to suck so hard. I guess this is what comes of the undeserved cred Goyer got from The Dark Knight.

To-day I've a particularly difficult page to draw. Yesterday's was supposed to be easy, but I ended up adding a bunch of maybe unnecessary flourishes.

Here's a little Venia's Travels bonus feature for you; 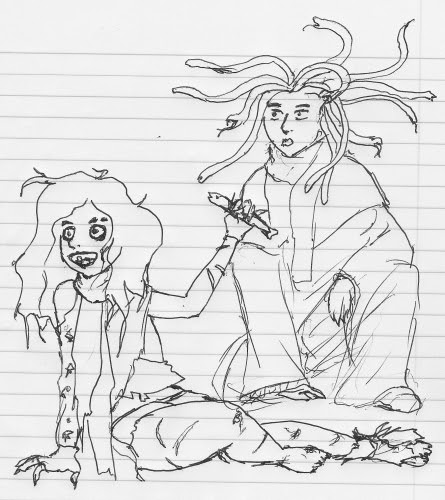 That's a doodle of Wircelia and Kakeshya from my school notebook, drawn in March or April. For some reason I envisioned Wircelia early on tossing fish around like the Swedish Chef.

The teacher saw me drawing it while we were supposed to be having group discussions about Paradise Lost. "It's a gorgon," I said. "It's a mythological creature, it's relevant." I still think Milton would dig it.
Posted by Setsuled at 5:25 PM
Email ThisBlogThis!Share to TwitterShare to FacebookShare to Pinterest