I got ten and a half hours of sleep to-day. 6:30am to 5pm. I . . . feel . . . fantastic. I know some people out there would say waking up at 5pm would make them feel disgusting, to which I can only reply that maybe that's what separates us brilliant web comic artists from you peasants.

I finally had a dream to-day that didn't involve Star Wars. Upon reflection, it might have had something to do with Vertigo, but I wasn't thinking of it at the time. I was walking on a metal pier at night with a skinny girl in a grey coat. I'd been trying to hit on her, but our conversation had drifted past anything flirtatious and we were both just interested in what the other was thinking. At the end of the pier, the girl kept walking and fell into the water. I watched her sinking, clearly visible somehow through the night black water. She didn't struggle, and somehow I knew she'd jumped in on purpose to see if I'd rescue her, which bugged me because it seemed like our conversation had been deeper than such an immature game. But, I figured, the gentlemanly thing would still be to "rescue" her and probably act like I didn't know she was doing it on purpose. Still, I took the time to take off my jacket and hat and take out my wallet before jumping in.

I finished watching all fifty two episodes of Hayate no Gotoku about a week ago. It was a pretty good series, not a masterpiece, but every episode was enjoyable in one way or another. Fifty two episodes is a lot for an anime series, and I never watched more than one episode in one sitting, so finishing it has sort of shaken up my schedule. I'm filling my anime slot now with a sort of rotation of different anime series--I've been watching the remastered Cowboy Bebop, which is an improvement over my old DVDs, though there doesn't seem to be new scenes spliced in like the remastered Evangelion. I've also been watching the 2005 version of Ah! My Goddess, which has so far been a tremendous improvement over the much shorter 1993 OVA series I watched in high school, mainly by adhering much closer to the manga.

Ah! My Goddess was one of the first anime series that caught my eye when I was just starting to take an interest in anime. Its character designs, particularly for the goddess characters, are very beautiful and sweet. Belldandy's eyebrows I remember making a very strong impression on me. I loved the look of the characters so much that I almost successfully overlooked how awful and saccharine the OVA was. I'd always heard the manga was better, but I'd never had a chance to read it. Now this new television series has made me very happy by uniting the great character designs with a genuinely enjoyable story, taking the time to establish the human characters before introducing the goddess element. The series is still basically an I Dream of Genie, but it's a much better looking I Dream of Genie with a pace that's not as grating. 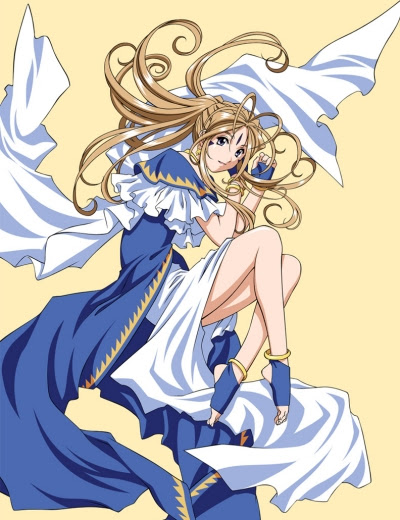 Posted by Setsuled at 7:45 PM
Email ThisBlogThis!Share to TwitterShare to FacebookShare to Pinterest