Most of the recovered high school artwork is massive colour pencil drawings on black construction paper. I was addicted to that particular setup for a while. Almost everything is too big to scan, but here's a portion of a large painting on white cardboard; 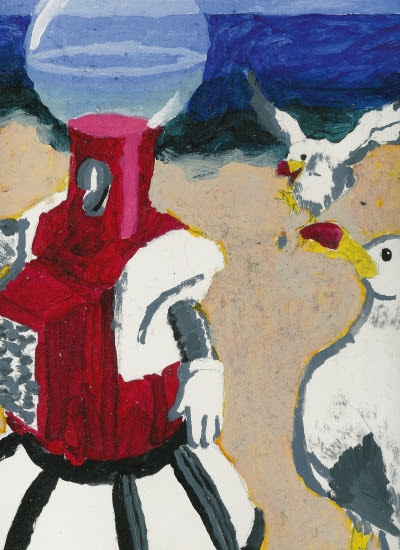 I think I had what can safely be called an obsession with Tom Servo in high school. Aside from this painting, there are several drawings I came across as well as a huge mural depicting Servo, tiny on a orange and white chequered plain with the Millennium Falcon flying past. I remember in my sculpting class making a clay Tom Servo cookie jar, too. Or trying to. I don't think it held together. I do remember it going through the kiln, but the lid, Servo's head, never fit properly.

I've just gotten back from my parents' house where I watched some more Sherlock Holmes with my sister. Now I need to get to the grocery store before I start drawing.

I spent some time arguing with Franklin about an idea Rahm Emanuel had for a "universal civilian service". I kind of like the idea of everyone having to spend three months between the ages of 18 and 25 learning what to do in the event of natural or human inflicted disasters.

At one point in the argument, Franklin asked me when I thought the government should stop treating people like children. I don't think survival training is necessarily children's fare, but it's just now occurred to me that I've never met anyone between ages 18 and 25 I considered to be an adult, myself included.
Posted by Setsuled at 9:11 PM
Email ThisBlogThis!Share to TwitterShare to FacebookShare to Pinterest