I don't think I ever spotted that before. I've seen Star Wars something like eight billion times, like most guys my age. I watched it over and over again as a kid, plenty of times in high school, and more than a few times as an adult. Last night was one of those occasions where all of the previous viewings and exposure to different parodies just melted away and I got sucked in by the story.

My enjoyment is still heightened a bit by nostalgia, and not just for the movie itself. Different bits of the movie would take me back to playing certain Star Wars video games for hours a day, especially X-Wing, TIE Fighter and the Super Nintendo's Super Star Wars and Super Return of the Jedi (for some reason I didn't really play much of Super Empire Strikes Back). Normally these days if I want something like a fresh Star Wars viewing experience I watch Akira Kurosawa's The Hidden Fortress, the movie from which Lucas borrowed much of the plot for the first Star Wars film. The Hidden Fortress is three hours long, but I tend to find myself compulsively watching it to the end whenever I put it in.

On the Criterion edition of The Hidden Fortress, there's an interview with George Lucas where, among other things, he talks about how artists are influenced by older stories and how, really, very few plots have actually been invented by mankind;

It's kind of funny Lucas refers to Leia as being more "stand and fight" than Princess Yuki. I actually think Yuki's a lot feistier.

My clues tweets from last night;

Star Wars seemed fresh again for me to-night.
I sat with a grey cat on the back porch.
Was jumped by a pit-bull who didn't bite.
Wonder why a waste ghoul would need a torch.

The dog was Tim's pit-bull, Cayden, who jumped up on me despite Tim's dad trying to restrain him. I'm definitely more of a cat person, but I'm starting to feel more affection for Cayden. Dogs just seem to want to express love all the time. It's not their fault they're smelly and sort of messy. It's like my relationship with charcoal--I once left an art class because the teacher insisted we work with charcoal and I was tired of getting it all over my hands. I had all the experience with charcoal I needed in high school art classes, I figured one oughta have license to be a little choosier in college. But that doesn't mean I think charcoal looks bad.

The last tweet was a reference to Fallout 3, which I played more of at Tim's house last night. I took some screenshots of my character, who's usually dressed like this; 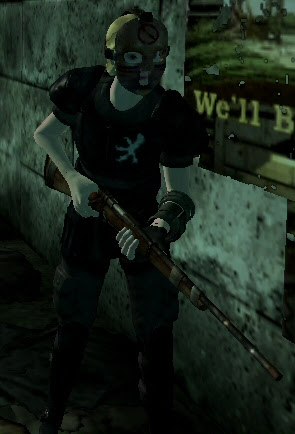 But for friendlier areas, there's a lot of cool 50s clothes to wear. 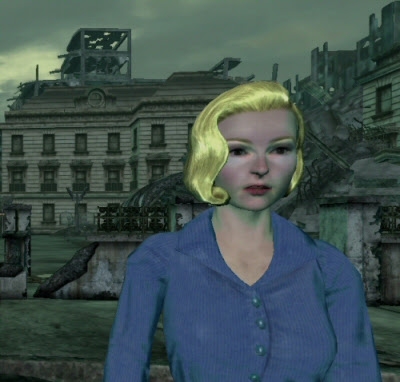 I love this grey suit, which reminds me of Vertigo; 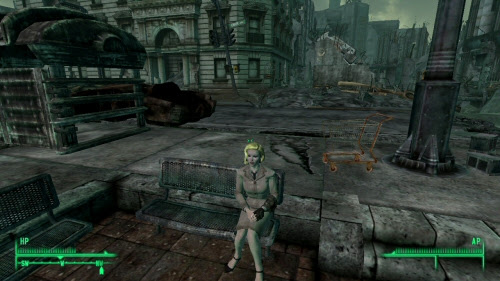 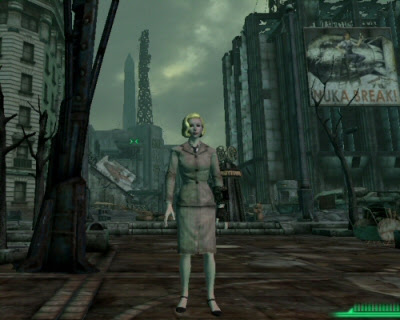 That's the Washington Monument in the background. I am really enjoying wandering around this game world, though I'm still not spending much time engaging in the game's dialogue, which is just not nearly as fun as it was in Fallout 2. Though I do sort of love the floating spherical robots roaming around, transmitting fireside chats by the post-apocalyptic U.S. president played by Malcolm McDowell. The guy completely fails at an American accent but, hey, he's Malcolm McDowell and that's good enough for me.
Posted by Setsuled at 5:09 PM
Email ThisBlogThis!Share to TwitterShare to FacebookShare to Pinterest