I just bought a book online for one cent.
Medieval women; had to buy it.
My lack of mead to-night I do lament.
I fear flatbread excess in my diet.

That's right--one cent! Women in the Middle Ages by Joseph and Frances Gies. Their Life in a Medieval Village was amazing, so I'm looking forward to this. But one cent. What's even the point? I know it's used but, jeez . . .

With breakfast to-day, I watched the new episode of Dollhouse, "Haunted", the first one to be written by Jane Espenson, who was in charge of much of Buffy the Vampire Slayer's later seasons. Actually, she was among three writers on the new Dollhouse episode, but it's very easy to tell which of the three unrelated plots in the episode she wrote; kind of a very conventional romantic murder mystery where Eliza Dushku's implanted with the personality of a recently murdered woman who then proceeds to solve her own murder. I have to say, I've never appreciated Jane Espenson quite as much as I did with this episode--I liked it much better than her work on Battlestar Galactica, and this was the most totally immersed I've felt in Dollhouse so far. Despite the fact that Dushku's still no chameleon of an actress, the episode does manage to introduce and craft a three dimensional character of Margaret you're genuinely sorry to see leave at the end.

Or maybe it's just the beautiful house where the episode was shot; 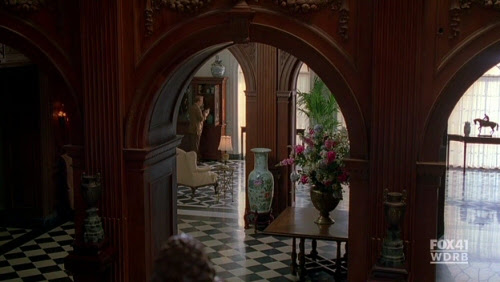 I can't seem to find out where this was filmed. I think we can be sure it's not a set, unless this is like Cat People borrowing The Magnificent Ambersons' set.

Looks like Jane Espenson has sole writing credit for the next Dollhouse. Now I'm really looking forward to it.

I overslept to-day, to 2:30pm, despite having gotten to sleep before 5am. I guess I need to start setting my alarm again.

"Weird Al" Yankovic posted this 1944 video on Twitter and it's one of the most hypnotically disturbing things I've ever seen;

The just elusive mental image of "Solid Potato Salad" completes it. "Solid" strikes as a positive adjective even as it makes one think of the salad as well and truly spoiled. This is a clear glimpse of the subterranean rivers of humanity's continuous nightmare. What sweet music.
Posted by Setsuled at 6:54 PM
Email ThisBlogThis!Share to TwitterShare to FacebookShare to Pinterest