Helping the Medicine Go Down 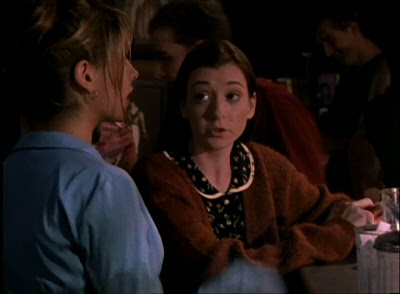 Is it just me, or is this the best Willow ever looked? I always hated how normal they made her look in later seasons. Buffy's look, in the first episode, meanwhile; 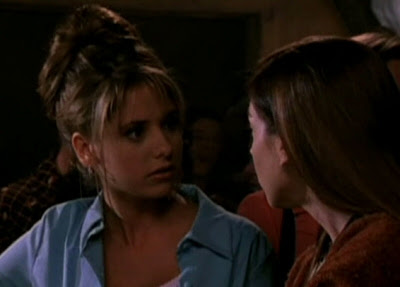 Has a distinctly Jerri Blank-ish quality. Is this really how popular girls from L.A. dressed at clubs in 1997? She looks like she's interviewing for a management position at a mall jewellery store. There's some painful irony when Buffy snarks about the dated wardrobe of a vampire in the same scene--a button down shirt with a red and yellow pattern and a black blazer. Not bad at all, actually.

I've been watching season one of Buffy the Vampire Slayer with breakfast the past couple days to exercise Twilight, I guess. There are a million ways the first episode of Buffy's not as slick as Twilight--it's downright awkward at times, but it has heart. Sometimes not even on purpose--this early on, the show was still an uncertain mix of parody and straightforward fantasy drama, with broad comedic moments like Buffy accidentally mentioning vampires to the principal, alongside an earnest battle to save Sunnyvale. Even that, the show's not quite sure how seriously to take it. In a way, this plays to modern audiences much better than Whedon's new shows, which assume an audience that wants to go along for the ride, whether it be a western space opera or a criminal organisation of human dolls.

No, audiences are much too uptight nowadays. A show must prostrate itself before Caesar and subtly sneak in its soul until the audience finds itself wanting to be invested in what's going on in spite of themselves. If you want to try anything strange, that is. If you want a movie or show filled with wall to wall wellworn concepts and characters like Twilight, you're free to play it straight.

Grand grocery tour gained but normal toothpaste.
Sort of sore throat was eased a bit by gin.
In a foreign bookshop I show no haste.
No clue which section my sought book is in.

I was in the Mitsuwa bookshop looking for Sayonara Zetsubo Sensei. I'm pretty sure they didn't have it, but they did have a hell of a lot of manga that hasn't been translated into English as well as a few series that have been translated into English but in far more attractive packages. I seem to have forgotten a lot of hiragana and katakana, but I was able to read most of the titles that weren't in kanji. Mitsuwa, by the way, is a big Japanese market; combination supermarket, bookstore, trinkets, cafe, and what have you, so long as you have it Japanese.

I think I might have caught something there because I feel a bit under the weather to-day. A bad sore throat followed by general dimness. The gin didn't help too much, nor did it take me very close to inebriation. I guess what I really need is some mead. Some manner of honey beverage in any case.
Posted by Setsuled at 5:38 PM
Email ThisBlogThis!Share to TwitterShare to FacebookShare to Pinterest