Incidentally, if you're looking for someone to follow on Twitter, you could do a lot worse than Joe Randazzo, Onion editor and man locked with Neil Gaiman in a fierce race to gain 333,000 followers. Randazzo's only down by just over three hundred thousand. Go and help the man, don't let Gaiman win at this like he's won at everything else (life, dreams, pretty rock pianist women).

Medieval medicine works to-day.
Strange passing girl, what are you screaming at?
The mead is quite good to-night, I must say.
And now Arlen Specter's a Democrat.

Just a couple weeks ago, I heard Specter on Howard Stern and I thought to myself, "Hmm. I don't mind this guy. Maybe I'm not a total partisan after all!" So much for that. Maybe I should have taken a clue from the fact that Specter was on The Howard Stern Show. There's still Chuck Hagel, a Republican I don't think is altogether ridiculous. I know there has to be a moderate bone somewhere in my body.

I was on my way back from buying a bottle of mead last night when I somehow heard an undulating high pitched scream over The Smiths I was blasting. I looked over to my left and there was this girl just howling out the passenger window in a white car next to me. They pulled ahead of me, but I got close to the vehicle a couple more times over the next few minutes and she maintained the scream without fail. Just another crazy Tuesday night in Santee, folks. We has goings on.

The mead really hit the spot. Drinking with me is never a matter of just alcohol--it has to be the right alcohol for the right occasion. The hot mead turned out to be the absolute perfect thing for my sore throat. My possibly swine related symptoms were obliterated for a few hours. Any medieval physician could've told me--patients who take mead almost invariably feel better.

I watched some more Buffy to-day with breakfast. What now? 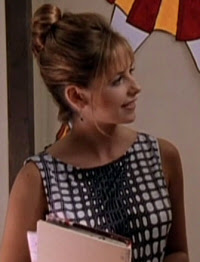 1960s receptionist? I have to admit, I am a little turned on by attractive women cultivating a vaguely turnip look. I'm digging Willow's asymmetrical widow's peak a lot more, though.

It was a decent episode--I'm not sure if it counts as the first or second episode of season one, depending on whether the first two episodes are genuinely a two-parter or just a long pilot split up. In any case, the episode I watched to-day introduced the witch character Amy and a story about how her mother was trying to relive her youth through her daughter by evil supernatural means. It's one of those episodes that a lot of critics particularly liked from the series--taking familiar teen issues and successfully translating them into meaningful superhero stories. I'm not sure it's my favourite aspect of the series, though I like it, and it's certainly pulled off sharply.

I've finished drawing and inking the next Venia's Travels, but I still need to colour five pages. I guess that's what I'll be doing to-night and to-morrow . . . I seem to have fallen right back into my nocturnal schedule. It's always really the comic that does it to me.
Posted by Setsuled at 6:49 PM
Email ThisBlogThis!Share to TwitterShare to FacebookShare to Pinterest