I Dream of Ifrit


Should We Be Doing More To Reduce The Graphic Violence In Our Dreams?

It so perfectly captures media and cultural hypocrisy in America. And isn't it scary that the Onion pundits seem more at ease with themselves than real pundits?

The grey cat just left me a mouse outside.
Dreamt I was at a dark Disney gift shop.
My teeth don't look like I have known fluoride.
But Blackbeard would likely call me milksop.

I learned the neighbour's grey cat is named Smoke, but there's another grey one hanging around, too, so I'm not sure which one left the mouse. She'd started eating it by the time I saw her, which made me feel guilty about the fresh one I'd thrown away. I had no idea there were any mice in the backyard, let alone enough for the cats to be dining on them regularly.

I drank wine again last night, and I'm thinking I need to quit. I keep waking up the next day with this strange heavy feeling, centred in my stomach, but my whole body feels like strings are pulling it down, like an upside down marionette. Hard liquor and sake don't seem to have this effect on me--I can't explain it. 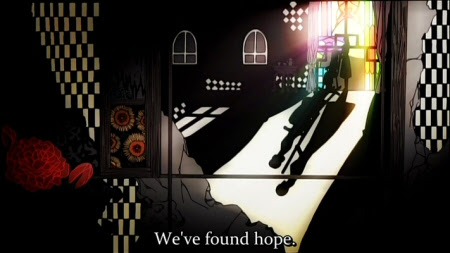 I've been exploring some new anime lately. I started watching Natsu no Arashi!, which I saw mentioned on Salaman Dream's journal. It's another visually amazing Akiyuki Shinbo series, this time based on a manga by Jin Kobayashi, creator of School Rumble, another series I love. I was excited to spot this cameo by School Rumble's Harima Kenji and Tenma Tsukamoto in the new series; 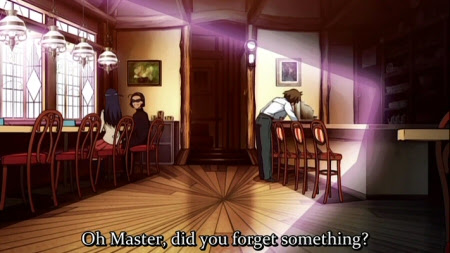 This series isn't quite as hyperactive as School Rumble and its supernatural elements aren't as subtle.

Cryptess recommended Fruits Basket to me and it seems okay so far, one episode in.

Last night I watched the Star Trek: The Next Generation episode "Tin Man", a good one, I think. It's hard to see Buffy the Vampire Slayer's Mayor Wilkins in Harry Groener's twitchy, supersensitive telepath in this episode. It's yet another story of someone overwhelmed by being able to read the thoughts of those around him, only to be comforted by the one person he can't read, in this case Commander Data. This is a plot that seems to come up over and over again in fantasy fiction--the oldest example I can think of off the top of my head is Interview with the Vampire, though I'm sure someone could point out older examples to me. It even crops up in Twilight, the version of Interview with the Vampire made for the plastic eggs in gumball machines.

Speaking of which, I bought a copy of the Rifftrax of Twilight yesterday which I'm very eager to hear, especially after seeing this sample.

EDIT: RIP Jack Cardiff. This guy's work is a big influence on how I think about colour in my own work.
Posted by Setsuled at 5:00 PM
Email ThisBlogThis!Share to TwitterShare to FacebookShare to Pinterest