Grand grocery tour gained but normal toothpaste.
Sort of sore throat was eased a bit by gin.
In a foreign bookshop I show no haste.
No clue which section my sought book is in.
I just bought a book online for one cent.
Medieval women; had to buy it.
My lack of mead to-night I do lament.
I fear flatbread excess in my diet.
Some movies have mana for all of us.
Japan has just invented fitness porn.
Time travel's useful, fun, and dangerous.
Bea Arthur, in Mos Eisley I shall mourn.
Some picture resizes you just can't choose.
Dangerous worlds do demand darling shoes.

Yes, Bea Arthur died yesterday. I didn't know her from much except watching Golden Girls with my parents as a kid and The Star Wars Holiday Special. I do remember enjoying her guest spot on Futurama as a "femme-puter". Mostly her name was familiar to me from jokes people made about her--comedy's a brutal business that way. On The Howard Stern Show a couple weeks ago, I heard Artie Lange talk about how when comedians are starting out it's not uncommon for competitors to sit in the audience and applaud when the person onstage starts to bomb.

I see Bill Corbett at the Rifftrax blog is feeling a little guilty about having made a joke peripherally at Bea Arthur's expense a couple days ago. But I think so many people made jokes about Arthur because no-one hated her, she seemed very tough, superior, and sort of invincible, while at the same time being very plain spoken. Even in The Star Wars Holiday Special I appreciated her sense of comic timing, like a lot of great comedians she could convey absolute sincerity even without necessarily respecting verisimilitude. The point being that comedians are our excuse to travel outside the zone of courtesy and respect for the things in the world we're told to respect or think we ought to respect. It's stress relief, and it's why humourless people tend to lash out at things that don't necessarily deserve the ire. Repression of humour is possibly even more perilous than repression of sexuality.

So, yes, that's basically why I don't feel guilty about having made a Bea Arthur joke or two in my time. In the other direction lies madness. But I think she was a cool lady. 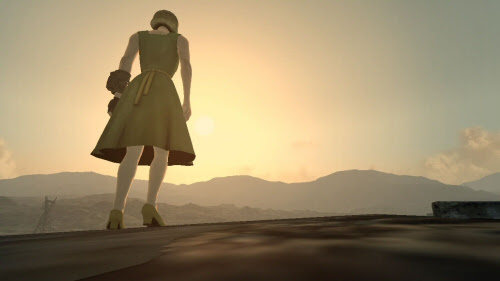 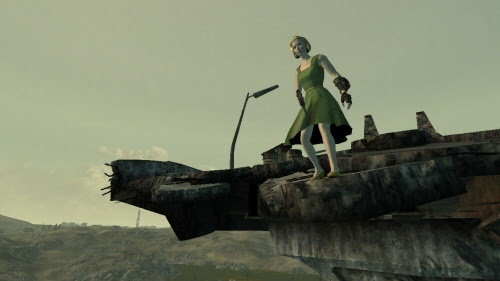 Much like in Oblivion, those distant hills aren't simply flat bitmaps--if you keep walking in that direction, you will eventually reach the capital. 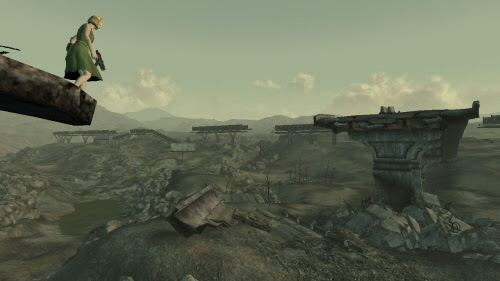 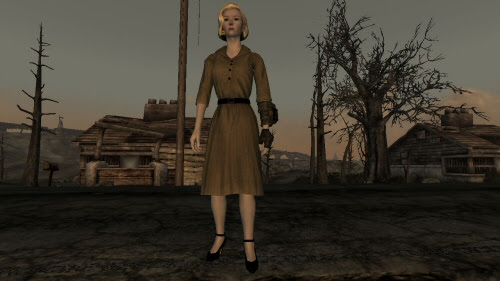 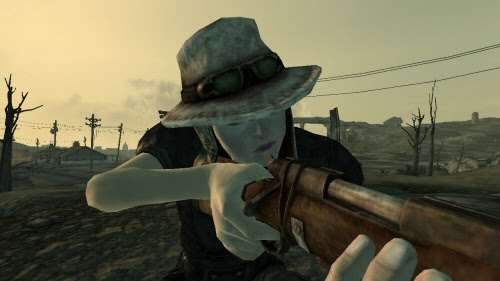 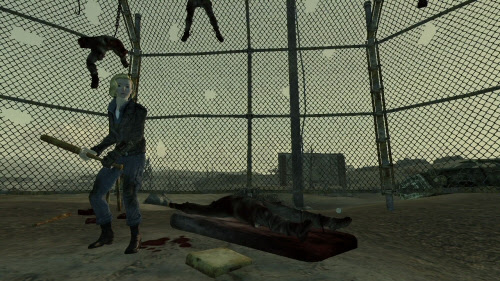 Baseball, after the apocalypse. 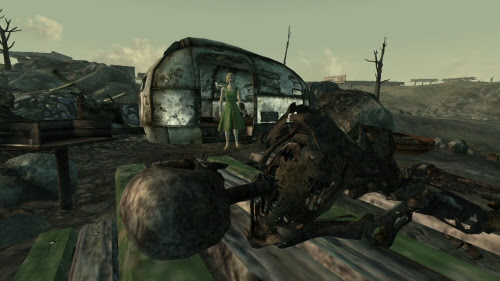 The battle for the picnic may be lost. 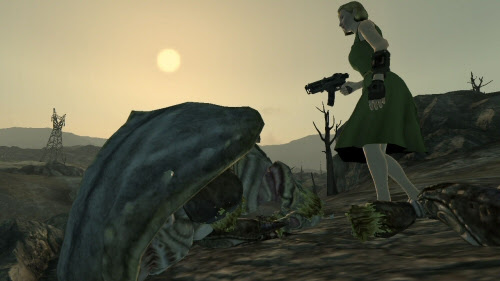 Freshly killed mirelurk, a species of giant mutant crab that inhabit the irradiated Potomac and the D.C. sewers. Pardon my bragging, but I love this picture so much; 1950s woman with starched green dress holding a submachine gun over a monstrous crustacean. This is the life. 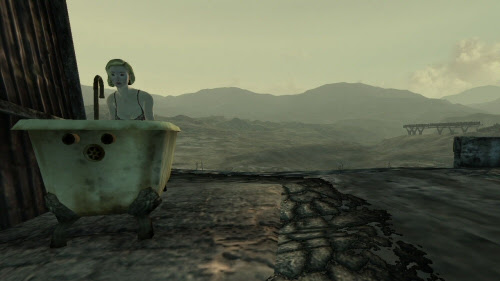 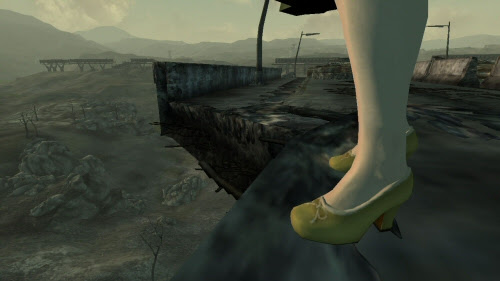 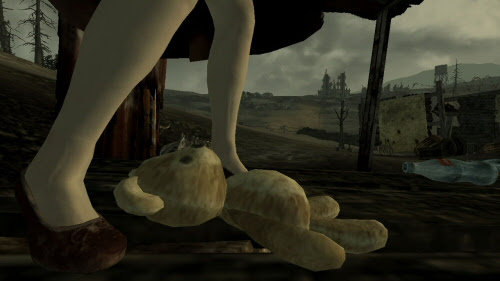 For some reason, there are a lot of these teddy bears around. There's a sewage station where a bunch of mutant roaches have mysteriously stock piled them. 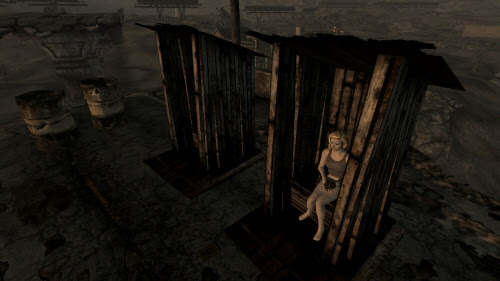 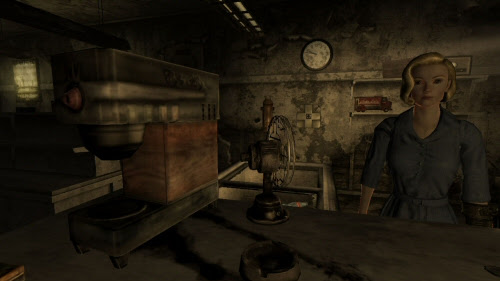 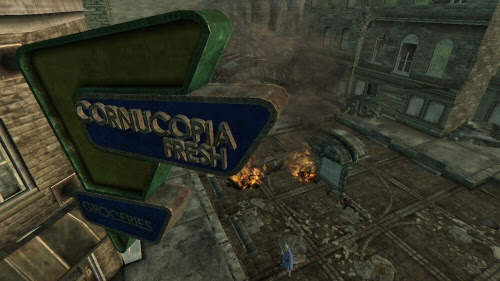 Time for some groceries. 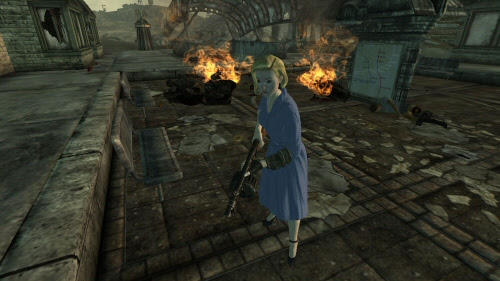 Anyone want more groceries? And by "groceries" I mean YOUR ASS.

Posted by Setsuled at 6:54 PM
Email ThisBlogThis!Share to TwitterShare to FacebookShare to Pinterest