I think I might be getting sick--I found myself unable to sleep due to nausea and a sort of heavy feeling and I had some Alka-Seltzer at around 8am. I wanted to watch Taxi Driver while I drank it, since it always makes me think of the scene where Travis Bickle's waiting for his Alka-Seltzer to dissolve in his glass. But I could see it was going to require effort to find my copy of the movie, so I put on the nearest thing at hand, The Seventh Seal. I was good with the beach scene and the squire finding the dead man, but everything started going too fast for me when Mia and Jof started talking. I guess I wasn't in a state to handle dialogue of any but the symbolic, dreamlike sort. I found myself contemplating how anachronistic Mia's form fitting, low cut chemise is.

While inking and colouring yesterday, I listened to an audiobook of The Legend of Sleepy Hollow, Washington Irving's original 1820 short story, which I hadn't read since I was a kid. I was surprised to find how similar it was to the 1949 Disney animated version. Descriptions of the characters almost seem like descriptions of their animated counterparts, and several events and places described in the story are illustrated well in the movie without narrative accompaniment; 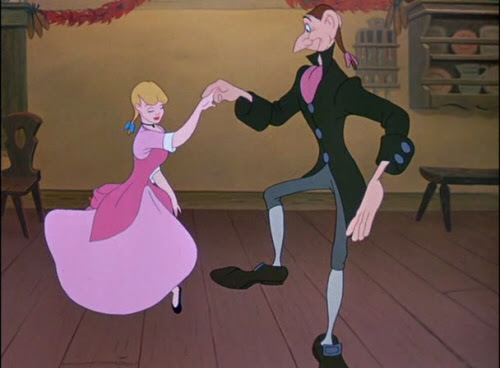 He was tall, but exceedingly lank, with narrow shoulders, long arms and legs, hands that dangled a mile out of his sleeves, feet that might have served for shovels, and his whole frame most loosely hung together. His head was small, and flat at top, with huge ears, large green glassy eyes, and a long snipe nose, so that it looked like a weather-cock perched upon his spindle neck to tell which way the wind blew. To see him striding along the profile of a hill on a windy day, with his clothes bagging and fluttering about him, one might have mistaken him for the genius of famine descending upon the earth, or some scarecrow eloped from a cornfield. 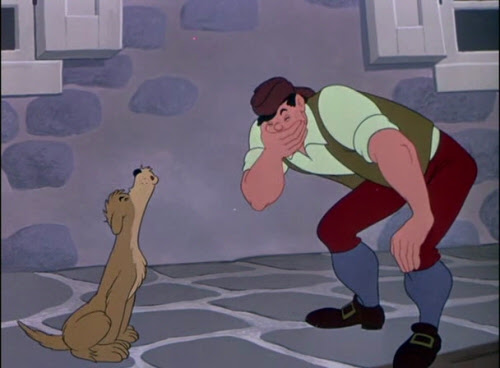 Brom took all opportunities of turning him into ridicule in presence of his mistress, and had a scoundrel dog whom he taught to whine in the most ludicrous manner, and introduced as a rival of Ichabod's, to instruct her in psalmody. 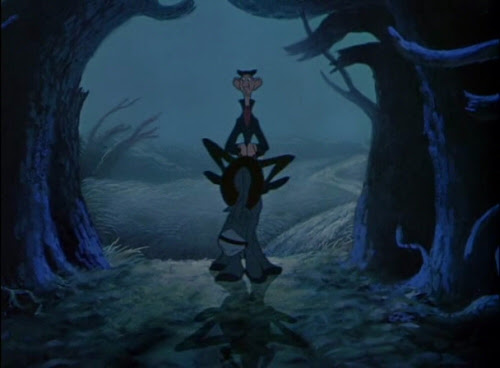 Ichabod was a suitable figure for such a steed. He rode with short stirrups, which brought his knees nearly up to the pommel of the saddle; his sharp elbows stuck out like grasshoppers'; he carried his whip perpendicularly in his hand, like a sceptre, and as his horse jogged on, the motion of his arms was not unlike the flapping of a pair of wings.

The low budget of the wartime film couldn't hope to equal the story's rapturous description of the countryside and the loving portrait of old fashioned colonial Dutch country folk that was reminiscent of Lovecraft, and the story seems likely to have been an influence on Lovecraft. But to me, the two biggest distinctions between the short story and film are in the last portion of the tale, wherein the short story has Katrina definitely rejecting Crane and the Headless Horseman quite unambiguously having been Brom Bones in disguise. That Bones apparently murders Crane after the man had already been crushed by the woman he was pursuing makes Crane's fate seem amazingly cruel and the fundamental nature of the valley folk savage, yet somehow not quite malevolent.

So it put in perspective a lot of the enormous differences in the Tim Burton film, differences I find I really wish he hadn't gone for--making Ichabod Crane a physically attractive man, a pioneer forensics pathologist instead of a school teacher, having him end up with the girl in an altogether happy ending. There is an interesting play between city thought and rural superstition, but I wish there had been something of the story's gloom and brutality in that movie, which I still think is visually Burton's most stunning work.
Posted by Setsuled at 9:49 PM
Email ThisBlogThis!Share to TwitterShare to FacebookShare to Pinterest