I'm running very late to-day due to a variety of errands. Waiting at the bank, I was reading Frances and Joseph Gies' Women in the Middle Ages. When I last took a British Literature class a couple years ago, the teacher had a section on women writers of the Middle Ages, something I always found mildly annoying--it was a subject really more of anthropological interest than literary interest. While the writings we studied were interesting, they didn't quite justify not spending the limited class time on a couple more Shakespeare plays instead. But I was fascinated by the fact that both women we read, Margery Kempe and Julian of Norwich, were really crazy. This was apparently because the only women who had opportunity to be writers were women attached in some way to religious institution and hardcore Christians are fucking nuts. In these cases, gloriously nuts, and I'm always captivated by the bizarre imagery that boils out around the oppressive lid of Christianity. To-day I read about Abbess Hildegard of Bingen, who recorded several visions she had in three large books. Women of the Middle Ages has an excerpt from her Liber divinorum operum, describing a monstrous entity with heads on its wings beneath which was a "horrible black venomous monster of revolting shape, upon the right ear of which a writhing serpent fixed itself." The being said to Hildegard;

I am the supreme and fiery force that sends forth all living sparks. Death hath no part in me, yet I bestow death, wherefore I am girt about with wisdom as with wings. I am that living and fiery essence of the divine substance that glows in the beauty of the fields, and in the shining water, and in the burning sun and the moon and the stars, and in the force of the invisible wind, the breath of all living things. I breathe in the green grass and in the flowers, and in the living waters . . . I am the source of the thundered word by which all creatures are made, I permeate all things that they may not die. I am life.

And dig this illustration from her Liber scivias; 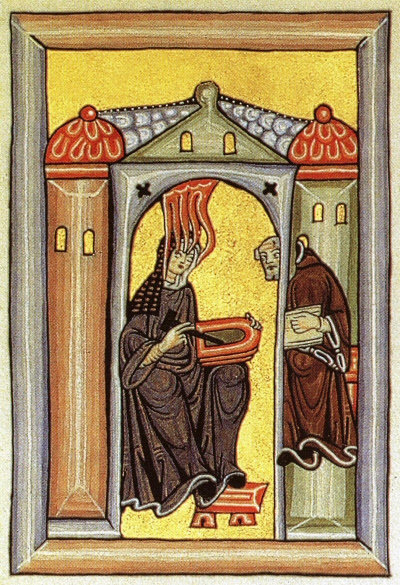 This is supposed to be heaven's light bestowing the visions on Hildegard who's writing on wax while a monk takes down a copy on parchment. I suppose neither would appreciate the observation that this image actually appears to portray God as a squid-like being caressing Hildegard's brain with His tentacles. I love the Middle Ages.

In Barnes and Noble to-day, I looked over a few books on the Middle Ages and picked up one that had a list of recommended films in the back. The first on its list was The Seventh Seal, which, though it does have several anachronisms, I agree with the book's assertion that it's one of the best films to convey the atmosphere and the attitudes of people in the Middle Ages. But it was hard finding any decent selection of books on the Middle Ages at Barnes and Noble since the whole History section was organised by author rather than subject.
Posted by Setsuled at 8:43 PM
Email ThisBlogThis!Share to TwitterShare to FacebookShare to Pinterest