I noticed to-day that Comedy Central has the complete Strangers with Candy on its website. This is one of my favourite episodes.

Also with breakfast to-day, I watched the first episode of Arakawa Under the Bridge, the newest Akiyuki Shinbo series. It's about a young man named Kou Ichimiya (yet another Shaft series male lead voiced by the excellent Hiroshi Kamiya) who's been brought up to be totally self-reliant, and to pursue repayment of debts with all vigour. He meets a strange girl named Nino who lives under a bridge and who he quickly ends up indebted to as she saves him from drowning.

I could feel the whole episode being dragged down just a bit from the extremely standard set-up of self-conscious, nervous guy meets bizarre, self-confident girl, and the attendant standard tension of Everything She Does Is Crazy By Rational Standards versus Yet She's Clearly More Comfortable With Herself Than He Is With Himself. But there's still some nice gags to enjoy, my favourite by far coming in Kou's explanation of his personal philosophy of self-reliance and we're given a flashback to his father demanding the young Kou repay everything his father did for him as an infant by now bottle feeding the father and pushing him about in a stroller; 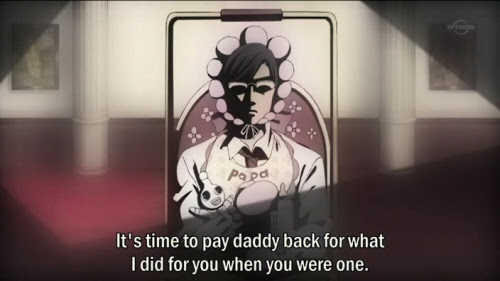 There's the slight hint of conservatism versus liberalism about the show, as Kou's isolating philosophy is contrasted with the communal fantasy of Nino, who introduces herself as being from Venus, and her Mayor, a man in a green turtle suit living in the river, insisting he's a real Kappa, a Japanese mythological creature. The basic idea of Nino desiring to be Kou's lover seems to be setting up a story about the necessity of community for love and happiness.

So I don't think it's going to be a bad series, though, as I've been rewatching Bakemonogatari lately, Arakawa Under the Bridge is diminished slightly by the genius of previous Akiyuki Shinbo works. I just finished watching the "Suruga Monkey" three episode story arc again, which I now think may be one of the greatest achievements in anime of all time, though it does hit on some personal favourite themes of mine. Especially in the fact that what seems to be the plot of the arc turns out to be fabricated by Suruga subconsciously because she can't confront the fact that she actually wanted to kill someone.

I've been thinking a lot lately about the concept of bad faith, which has helped me understand better the people who'd called Red Letter Media's review of Attack of the Clones misogynist. I was watching last night's Daily Show and John Stewart played a clip of Newt Gingrich and Sean Hannity talking about how terrible it was that Obama's recent nuclear treaty restricted the U.S. from nuclear retaliation in the case of biological weapons attack--even though the treaty does no such thing. Gingrich and Hannity parroted the lie back and forth to each other, and I realised this typical sort of falseness on Fox and the accusations of misogyny thrown at Red Letter Media aren't necessarily conscious lies but strategies the minds of the speakers have quickly come up with while their focus is on the goal; for one group, revealing Obama to be the danger that they "know" he his, and for the other group, the idea that any portrayal of violence towards women that does not explicitly condemn it is misogynist. It doesn't matter that they, of course, know that there is no evidence in the video itself that the maker of it is misogynist.

I don't mean to suggest these are extraordinarily crazy individuals. I've been seeing bad faith in myself and in others all the time. There was a quote I really liked in War and Peace last night. A character, Pierre, talking about his recently deceased wife with whom he had a bad relationship, says, "When two people quarrel, both are always at fault. And one's own guilt suddenly becomes extremely grave when the other is no more."

And at first I thought, "Surely there must be some instances where only one party is at fault in a quarrel." But the more I thought about it, the more I realised any perfect justice of one side of any quarrel can't survive any significant amount of time due to bad faith--to support the continuance of a rift, each party constantly finds actions and observations to interpret in such a way as to reaffirm the other party's guilt. I've seen this kind of thing all my life, but as the concept of bad faith says, both parties, to an outside observer, are at all times free to mend the rift, something of which the participants are inevitably at some level aware, and thus there's always a level of guilt.