The Power of Big Boys 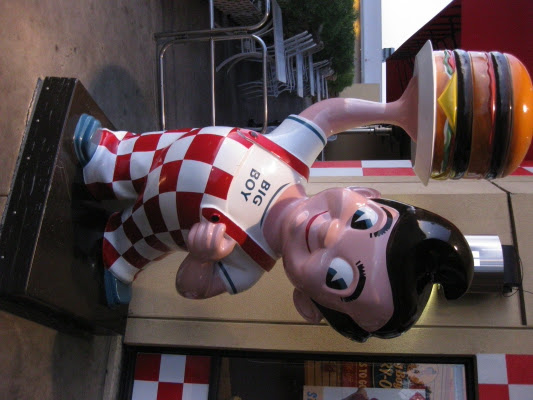 That's from the new Bob's Big Boy restaurant at Parkway Plaza mall. It's not hard to see why Bob's Big Boy was David Lynch's favourite burger joint--when I was a kid, I remember one location with a Big Boy out front that had to be at least twenty feet tall, with the same creepy large pupils, sunken smile, and cherubic build.

I was at the mall buying some tea, a shirt, and slacks. Someone I know complimented the red shirt I was wearing to-day, which always bugs me because I feel like people are subtly trying to encourage me not to wear as much black. But to-day I bought an olive green, button down shirt and slightly darker, olive green slacks--not to be worn together, but I think either one paired with black slacks or black shirt might convey a vague sense of dangerous guerrilla communist.

Also new at Parkway Plaza was an enormous chess set in one of the big intersections, with a sign inviting shoppers to play. I would've started asking people around to play me, except I really didn't have time and there were already some kids fucking with it.

Chess is brought up a few times in War and Peace. Tolstoy actually made a similar statement to the one I made in chapter 42 of Venia's Travels, about how coordinating armies is like working with a chess set of greater size and complexity than the human mind is really equipped to control--I'd written that chapter before I got to Tolstoy's statement, though I'm not exactly going to say I came up with the idea independent of Tolstoy, since I was already getting the basic ideas from War and Peace that led to Tolstoy making the statement and I just happened to have been thinking about chess lately.

Later in the book, Tolstoy even goes a step further, talking about how when a chess player loses he erroneously blames himself for missing certain moves, which is going a bit far for me. If chess were really so totally up to chance, then people wouldn't consistently win tournaments. But I think there's something to Tolstoy's point about chess being less about one side being smarter than the other than most people think. As Howard Stern, a chess player, pointed out a couple weeks ago, Bobby Fischer was an anti-Semitic Jew.

Napoleon evidently referred to battles as chess now and then, and although Tolstoy generally portrays him as a somewhat ridiculous character, at times I almost felt like Tolstoy pitied him for falsely bearing the weight of so much murder, which, according to Tolstoy's philosophy, couldn't be more Napoleon's fault than of any random infantryman.

Though Napoleon at that time, in 1812, was more convinced than ever that it depended on him to shed or not to shed the blood of his people--as Aleksandr expressed it in the last letter he wrote to him--he had never been so subject to the inevitable laws, which compelled him (while thinking that he was acting of his own volition) to do for the world in general, for history, what had to be done.

The people of the west moved east to slay their fellow man. And by the law of coincidence, thousands of minute causes fitted together and combined to produce that movement and the war: reproaches for the nonobservance of the Continental system, the Duke of Oldenburg's wrongs, the movement of troops into Prussia--undertaken (as it seemed to Napoleon) for the sole purpose of obtaining an armed peace--the French Emperor's love of war and habit of waging it coinciding with the inclinations of his people, the passion for grandiose presentations, the expenditures on those preparations and the necessity of attaining advantages to compensate for them, the intoxicating effect of the honours he received in Dresden, the diplomatic negotiations which in the opinion of contemporaries were carried on with sincere desire to attain peace but which only wounded the self-esteem of both sides, and millions upon millions of other causes that adapted themselves to the fated event that coincided with it.

I loved how Tolstoy showed people acting directly contrary to their true desires meeting with disastrous consequences. In one of the book's two love triangles, one character sends a letter to the man she loves telling him exactly the opposite of what she feels as part of a somewhat complicated plan to win him without appearing to be an obstacle, but only has the effect of helping him feel justified in pursuing someone new he'd developed feelings for. It's clear the course of people's lives and the movement of history are, in Tolstoy's opinion, solely due to the will of God, which is in part why I think he spends so much time on Pierre's misadventures with the Freemasons--as though Tolstoy wishes to establish that he's not a proponent of that ridiculous cult--his idea of God's influence on events is more refined.

I mainly consider myself an agnostic, so the phenomenon Tolstoy so ably displays could to me be described as manifestations through human culture of some bizarre migratory instincts. One of my favourite bits was Tolstoy's description of the inhabitants of a group of isolated villages;

There were very few resident landowners in the neighbourhood, consequently few domestic or literate serfs, and the lives of the peasantry in that region were more powerfully and perceptibly affected than elsewhere by the mysterious undercurrents in the life of the Russian people, the causes and significance of which are so baffling to our contemporaries. One such phenomenon, which had occurred twenty years before, was a movement among the peasants to immigrate to some unknown "warm rivers." Hundreds of peasants, among them those of Bogucharovo, suddenly began selling their cattle and moving with their families toward the southeast. Like birds flying somewhere beyond the sea, so these men and their wives and their children streamed to the southeast, to parts where none of them had ever been. They set off in caravans, bought their freedom one by one, or ran away, walking or driving toward the "warm rivers." Many were punished, some being sent to Siberia; many died of cold and hunger on the road; many returned of their own accord; and the movement declined as it had sprung up, without apparent cause.
Posted by Setsuled at 10:24 PM
Email ThisBlogThis!Share to TwitterShare to FacebookShare to Pinterest