Give Her the Lightsabre

Halfway through March and I've already reached the point where my ceiling fan needs to run on high 24/7.

I'm six episodes through season two of Clone Wars and the show is impressing me more and more, despite this season featuring an annoying main villain, a bounty hunter named Cad Bane who's able to outmanoeuvre jedi just a little too easily. But I dearly loved a trio of episodes beginning with "Senate Spy" and ending with "Weapons Factory"--"Senate Spy", from beginning to end, is a homage to Alfred Hitchcock's Notorious, with Anakin as Devlin, Padme as Alicia, and a fellow Republic Senator with whom Padme shares a romantic past as the Alex Sebastian character. In this version, Padme is sent to rekindle the relationship in order to learn the extent of the Senator's involvement with the Separatists, who take the place of the Nazis. The episode has a lot of the moments, like Alicia embarrassing Sebastian to conceal the fact that she's holding a key, Alicia being drugged, and the slow staircase sequence while the Nazis make subtly sinister inquiries.

This episode's followed by a couple of really great action oriented episodes as the Republic retakes Geonosis. There's a satisfying focus on female jedi in the latter episode, with Luminara, Ahsoka, and Luminara's padawan Barriss Offee basically running the show while Anakin grumbles and obtrusively lets his emotions control him.

I am really digging Luminara. I loved her measured response at the end of the episode compared to Anakin's furore, and how she came off looking wiser and stronger for it, rather than the show going the way most popular fictions seem to go these days, endorsing acts taken in reckless anger. I'm not saying such fiction is necessarily bad, but it's nice to have variety.

So it was disappointing when Luminara was reduced to a damsel in distress role in the next episode, a pretty half assed Aliens homage. The writing quality seems to shift a lot on the show, probably because there are so many writers. I've noticed the whole writing staff seems to be different on an almost season to season basis. 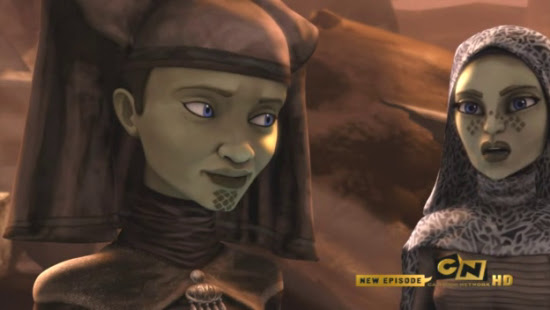