I guess it was announced at some point on Tuesday that the class was to have read all of Book 1 of Hard Times by to-day. Everyone seemed to know but me--I'd only read the first five chapters. Which was unfortunate because there was a quiz. But there was only two out of the about eight or so I didn't know the answers to--"What is produced in Coketown?" and "What is Stephen Blackpool's problem?"

The first question I stared out a long time and thought, "What's coke related to?" I thought, "Smelting iron," so I wrote "Steel" and the answer turned out to be textiles. I even had the honour of the professor choosing my answer to share with the class for amusement. So that was . . . great.

The other question related to a character I hadn't been introduced to yet, "What is Stephen Blackpool's problem?" So I wrote, "Money and his relationships with other people." I figured that was bound to cover it. Ah, I'm a moron.

Maybe I ought to have spent less time watching Star Wars: The Clone Wars, the first season of which I finished watching this morning. I'm liking this show better and better--I love how subversively not subversive it is. I actually see now a logic behind Lucas making the aliens talk like racial stereotypes. It's a bit like Starship Troopers; it's a propaganda universe with armies of good men versus bad men--nicely cast as clones and droids. And there's deliberate, tug-at-your-heartstrings melodrama like two clones helping an abandoned Twi-lek child when Ryloth is held by the Separatists. And Anakin is the hero--it all helps the impression of this shallow reality that eventually breaks in Episode III. 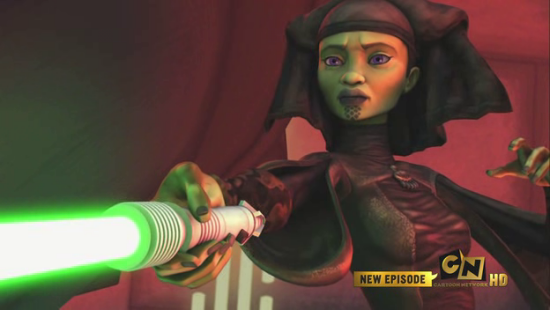 Which is not to say one doesn't get invested in the characters. It does all that and makes you like it. My favourite episode so far is one written by Paul Dini that has Luminara facing off with Asajj Ventress. I do hope we get to see some female jedi in the new movies.

I also love how children's television in America has gotten away from the No-one Dies Ever rule that was in place when I was a kid. People die all the time on Clone Wars and it's great.