The Gold and Crimson Screen

I often think that if Fred Astaire and Ginger Rogers were making movies to-day, they'd look a lot like Bollywood movies. Not just because Bollywood movies tend to have a better instinct for when and where to use songs than most American musical films of the past forty years, but because of the attitude and environment that informs the stories in Bollywood films. In 2004's Hum Tum, censorship prohibits a main character from getting divorced, but it doesn't prohibit her from remarking ironically in one scene that it's "Good to be back in India" as she observes two impoverished children defecating on the curb. So we have Hays code-like content guidelines in films produced in a country where most people live in Great Depression era conditions. Like many musicals produced in the Great Depression, Hum Tum serves audiences a superficially entertaining romantic comedy plot with charismatic, talented leads living in a beautiful, middle to upper middle class fantasy version of reality.

Two things I've come to expect from seeing any Bollywood movie--a significant portion of the film will take place in Europe (Jodhaa Akbar has been the only exception so far) and there will be at least one lavish, traditional Hindu wedding sequence (Kahaani has been the only exception so far). The reasons are fairly clear--productions can expect to find beautiful locations for exteriors in Europe and the wedding sequences are shot almost entirely on sound stages. 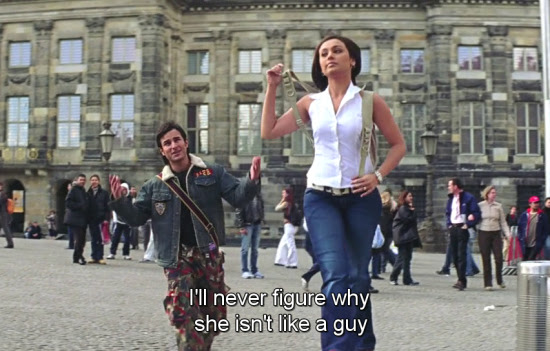 Hum Tum has the most European footage I've seen in a Bollywood movie--most of the film takes place in Paris, but two main characters, Karan and Rhea (Saif Ali Khan and Rani Mukerji) first get to know each other in Amsterdam, where a musical number about the differences between men and women sets up the self-consciously When Harry Met Sally inspired chemistry between the two. 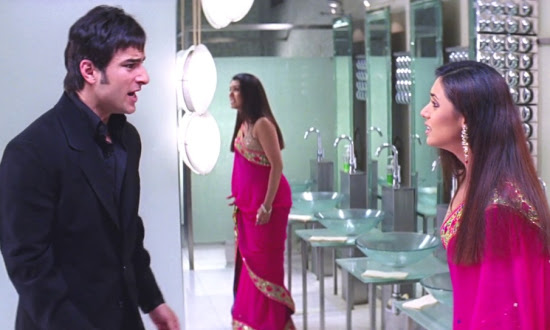 As in most Bollywood movies, a greater amount of bad behaviour seems to be expected and tolerated from men than from Billy Crystal in the Rob Reiner film as we see Karan, who meets Rhea when he's seated next to her on the plane to Amsterdam, sneezing into her food and rifling through her bag when she's not looking.

The content of their contentious duet is mostly made up of stereotypes, as her section tends to concentrate on how men leave wet towels on the floor and empty tooth paste tubes in the bathroom. His section is about how women persistently don't follow their hearts, with the implication, I guess, she's supposed to have fallen head over heels when she found his snot in her lunch. 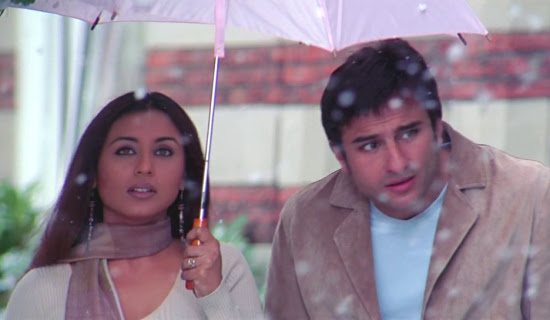 In the latter half of the movie, Karan inexplicably turns into the sweetest guy in the world, buying her lunch while she's at work, helping her adjust after the loss of her husband without any expectation of remuneration of any kind. But of course, it's all mostly just a pretext for musical numbers. 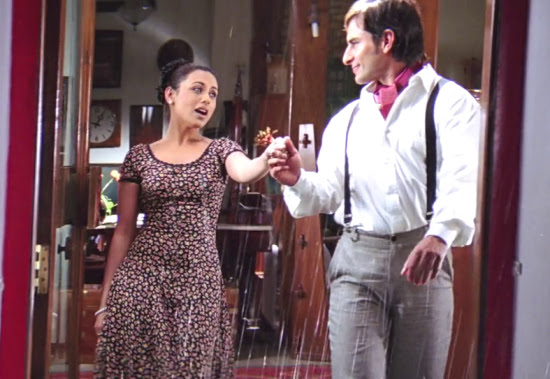 Saif Ali Khan is all right, but Rani Mukerji is wonderful, displaying great comic timing and an expressive performance, though it's with some disappointment I read that neither actor actually did any of the singing--they were dubbed.

The cheaper digital photography of the twenty first century makes the film look slicker than 90s Bollywood movies, but, even though there's a satisfying amount of women actually criticising men (particularly a good number called "Chocolate Hero"), the increasing amount of Western influence in composition and editing is a little sad.