Who'll Speak for the Snakes?

Maybe that's not too directly relevant--Margaret Thatcher fucked over more people than the Irish--but I just saw that interview for the first time to-day and it's one of the best interviews with Elvis Costello I've ever seen.

I also tried Guinness extra stout last night in my intermittent continued effort to find a beer I actually like. No luck; I wish I'd had Jameson instead. It did taste slightly less like bread juice, but only because it tasted more like dirt.

And now I find out it's made with fish bladder and as a vegetarian I oughtn't to be drinking it. Though I'm not as hardcore a vegetarian as Morrissey, who recently cancelled an appearance on Jimmy Kimmel Live! when he found out he was going to appear on the same programme as some duck hunters. I don't tend to expect a lot from Jimmy Kimmel, though I guess he usually doesn't seem like a bad guy, but I thought his tweet in response to Morrissey's cancellation was particularly lame;

note to Morrissey - if you have more dumb statements to make, I invite you to make them where I do, on my show

Included with the tweet was a picture of Morrissey's You are the Quarry album; 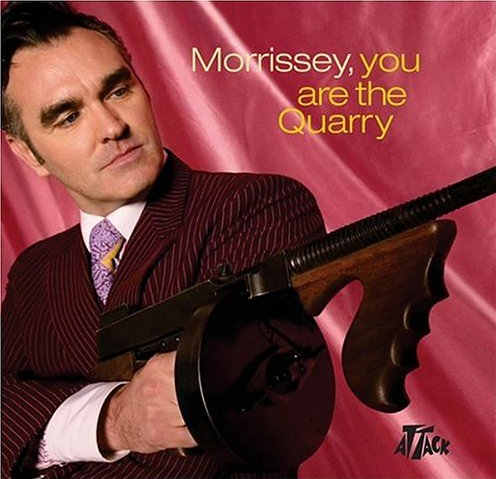 Implying, I guess, that Morrissey is a hypocrite for posing with a gun while refusing to associate with duck hunters. Maybe Kimmel thinks Morrissey's stance is anti-gun rather than anti-hunting? Maybe Kimmel just didn't have the imagination to realise Morrissey makes a distinction between killing people and killing animals. If he'd done a little more research, he'd maybe have learned about the hot water Morrissey got in for recording his own song about Margaret Thatcher, his sentiments subtly expressed by the title "Margaret on the Guillotine".

Well, maybe I ought to leave you with something more broadly Irish, so here you go;