The Only Believable Vision is the Eye 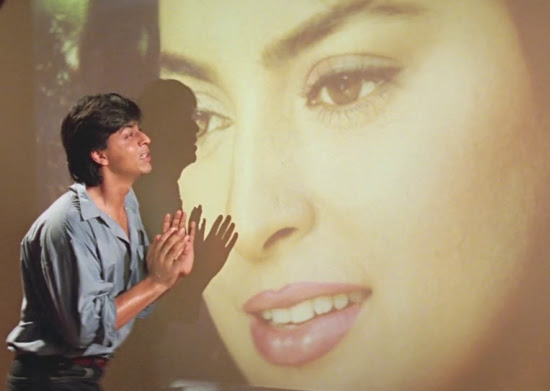 On Friday night I watched the biggest movie star in the world in one of the massive blockbusters that made him a star. I speak, of course, of Shah Rukh Khan in 1993's Darr: A Violent Love Story. This is for many reasons a strange movie. For one thing, I'm apparently very far from alone in finding the film's homicidally insane stalker character Rahul (Khan) a lot more appealing than the hero, Sunil (Sunny Deol). It's a movie that shifts quite casually between jubilant song and dance numbers and violent thriller sequences, as one might expect from Bollywood. It's charming, even as it's perplexing. It exhibits a too casual misogyny one senses is culturally ingrained, and there's something both disturbing and anthropologically fascinating in its appeal.

When I reviewed 1995's Dilwale Dulhania Le Jayenge last year, I talked about how repulsive I found Shah Rukh Khan as the romantic lead. I said, "The only thing I can think of is that he must have been really good in movies before this one so his fans are responding more to the familiarity of the man." Now, having seen Darr, I actually kind of get it. 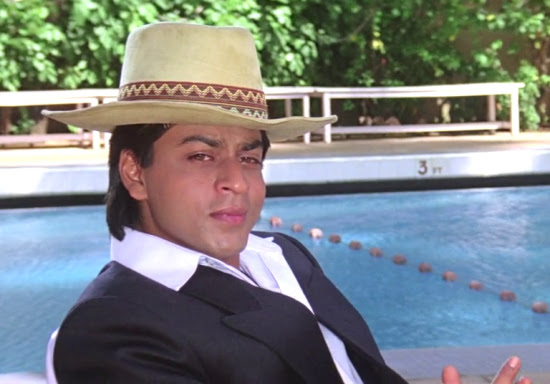 I'm not even sure how much the average viewer of the movie was consciously aware of how it was working. But I think the best explanation for the film's effect may be that Rahul's insanity is the sanest thing in the movie.

Sunil and Kiran (the beautiful and talented Juhi Chawla) are a couple very much in love, ready to get married now that Kiran's recently out of college. Kiran had a secret admirer in college, who we see evading and enticing her in this opening scene;

The admirer, of course, is Rahul. The chorus to this song, creepily enough, translates to something like, "Whether you say yes or no, you're mine, Kiran." And yet, for being something one would expect a stalker to say, it actually comes off as more grounded than Kiran's oddly bland reaction.

This strange tonal discrepancy happens throughout the film. After a scene where Sunil is nearly killed when Rahul disables the brakes in his car, Kiran tearfully goes to flee the country, hoping to divert her attacker's attention from her loved one. Sunil stops her at the train station, managing to convince her to marry him first and allow him to flee with her. This tense scene of two people fragile and determined is immediately followed by the vibrant and unabashedly intense jubilance of Kiran's bridal shower.

Kiran herself grins and has fun throughout the scene, conveying no hint of the terror that had dominated her psyche before this. 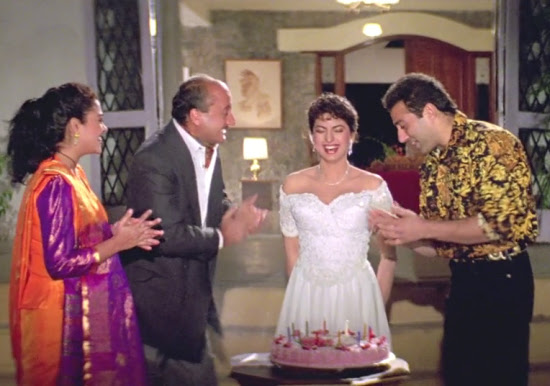 Sunil's weirdness manifests in what I'm seeing more and more as typical misogyny in Indian film. In one scene where Kiran is swimming alone at night, Sunil somehow sneaks up on her under water to repeatedly pull her beneath the surface while she screams and gasps for breath, not knowing who her attacker is until he finally releases her and he surfaces, laughing at her emotional distress. 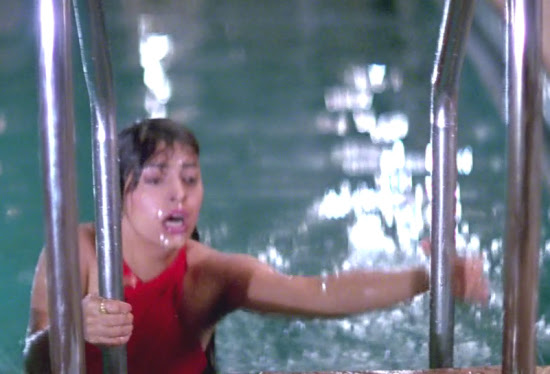 In fact, the only things, for the first 80% of the film, that makes Rahul worse than Sunil is that Rahul disables Sunil's brakes and at one point kills two guys in an elevator. The difference certainly isn't in his treatment of Kiran--the worst he does for the first couple hours of the film is randomly telephone her and tell her he loves her with his trademark stutter.

Most of his craziness is portrayed when he's alone, as when he serenades a photo of Kiran projected on the wall or, in a fascinating early scene, when he plucks apart a rose "she loves me, she loves me not" fashion as he walks to the edge of a building's rooftop. The idea being that he'll jump off if the final petal is "she loves me not". 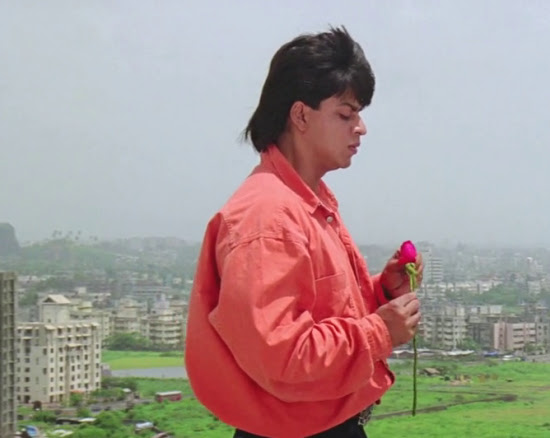 A big problem I had with Khan in Dilwale Dulhania Le Jayenge was his tendency to go broad and project plainly what other characters aren't suppose to be able to pick up. Yash Chopra, one of India's most admired directors, made Darr after he'd been an established name for decades and maybe it's the director that accounts for the fact that Khan here gives a far more nuanced performance.

He poses as a friend to the couple and we're compelled to study his face and what he says to see where the craziness might spill through and give him away. Khan in this movie performs this balancing act ably and it is another thing that sets him apart from the comparatively one dimensional performances of the two protagonists.

I think the root of the film's strange effect is in that Rahul's delusions and voyeurism resonate with the movie audience. We see several scenes of him fantasising about Kiran, where she sings for him and he sings with her. The framing with his character's mental state and the structure of the story actually make these song and dance numbers fit in ways that the tonal rollercoaster of the Kiran and Sunil POV numbers don't. And more than this, Rahul's fantasies key into aspects of fundamental human insecurity and unmet needs for love and validation.