Black is White if Black is Not Grey or Blue on Tuesday Unless Pink isn't Turquoise In December and White is Visible In Infrared . . .

Mirrors are assholes. At least the one in 2014's Oculus is. An apparently sentient being, it enjoys inflicting all sorts of hallucinations on people before finally killing them. If Q from Star Trek: The Next Generation enjoyed killing more and were a mirror, he'd be this mirror. Maybe I'll call it Mickey the Mirror. Giving the malevolent object unlimited power turns out to have the opposite of the intended effect, making the events in the film feel gradually less meaningful. This is exacerbated by tricks played with the point of view until it's never clear if anything happening on screen is actually having any tangible effect on any of the characters.

It starts off decently enough with Karen Gillen as a young woman named Kaylie checking her brother, Tim (Brenton Thwaites), out of an asylum where he's been for ten years. He'd shot his father, possibly because his father was a murderous sadist who'd been torturing Tim and Kaylie's mother to death, or possibly because the mirror with the demonic black frame was making everyone crazy.

It's the latter line that Kaylie believes and she's made it her mission to stop the mirror once and for all. But how can you break something that can force you to walk away from it and harm yourself instead? Kaylie has a complicated plan the shortcomings of which are immediately obvious to any viewer.

From here the film proceeds, cutting between Kaylie and Tim in the present and Kaylie and Tim as children (played by Annalise Basso and Garrett Ryan). Then the two timelines seem to possibly converge as older and younger actors seem to meet each other, or it could be the filmmaker's technique to illustrate reminiscence, or it could be the mirror conjuring versions of the characters that aren't real at all.

Among the fail-safes Kaylie has in place, she's tasked her fiancé (James Lafferty) with calling her every hour on the hour. When he shows up, she accidentally kills him somehow by stabbing him in the neck with a small piece of glass. Except she knows the glass isn't real because she didn't see it through the camera on her phone. But then she knows she really killed her fiancé because she sees him through the camera on her phone. And then her fiancé calls her to check in, as requested, on her phone. I still have no idea if that guy actually died.

And everything is like that in the latter portion. The arguments between Kaylie and Tim in the beginning are kind of good, about whether or not Kaylie or Tim is crazy, but the movie goes too far on the questionable senses route. You can mess with the minds of your characters as much as you want so long as you leave at least one anchor for the audience, someone who experiences this unreliable reality, otherwise it's just a series of images without weight.

Katee Sackhoff is really good in the flashbacks as Kaylie and Tim's mother, giving a very natural and vulnerable performance. Karen Gillen is good, too. I kept trying to think what her hair style reminded me of and to-day I realised it was B-ko from Project A-ko. 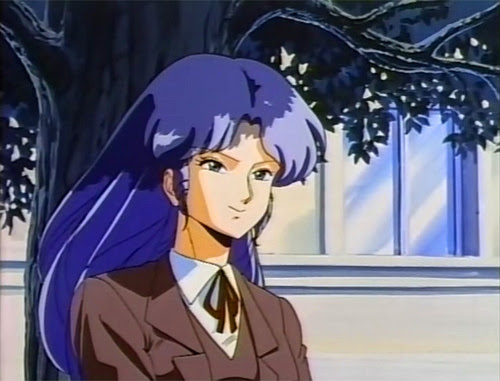 I love the look of 80s anime so it would be kind of cool if it's influencing hair stylists.

Posted by Setsuled at 2:56 PM
Email ThisBlogThis!Share to TwitterShare to FacebookShare to Pinterest