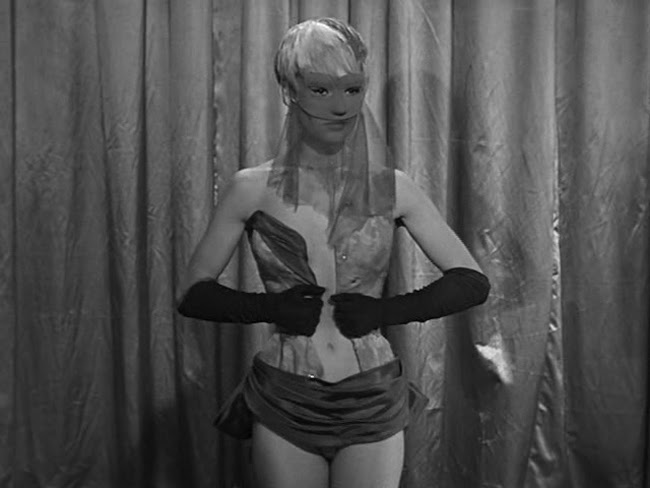 Becoming a stripper isn't enough to replace a signed Balzac novel. Brigitte Bardot has to become the best stripper in 1956's Plucking the Daisy (En effeuillant la marguerite), a distractingly sexist yet undeniably adorable movie about a young woman who runs away from home and shacks up in a museum.

If it had been anyone other than Brigitte Bardot, this film would be pretty run of the mill and I wouldn't be able to get past the fact that the smug male lead, Daniel Gelin--who appeared in Hitchcock's The Man Who Knew Too Much the same year--is incredibly annoying. I can't remember ever wanting the guy not to get the girl as much as I wanted him not to get her in this movie. 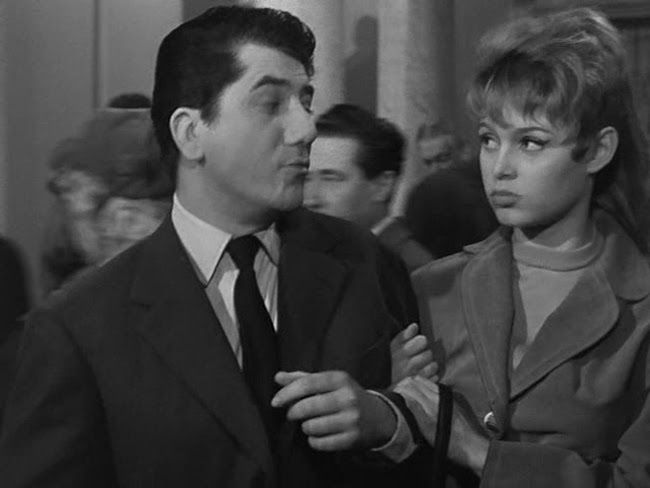 But damn me, Bardot carries it. The film was co-written and produced by Roger Vadim, who that same year directed Bardot in her big breakout role (though she was already famous) And God Created Woman, a movie which also bugged me in its rather retrograde attitude regarding the roles men and women ought to inhabit. I think roles Bardot later took, like Viva Maria and particularly Contempt, were reactions against the attitudes of these Vadim movies. But nevertheless, watching her absently taking up residence in a Balzac museum, wearing Balzac's robe while she drinks coffee, all because she believes it's her brother's home, just could not fail to put a smile on my face. 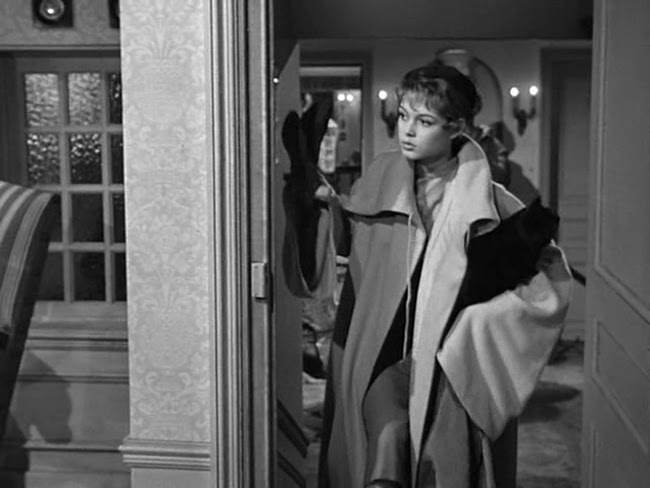 Her brother's an artist who's written home claiming to be a big success but is in reality an assistant curator at the museum. He's played by Darry Cowl, who gives my second favourite performance in the film with a hazy, stumbling, double taking interpretation of the role and seems to be even more lost in the woods than his sister. 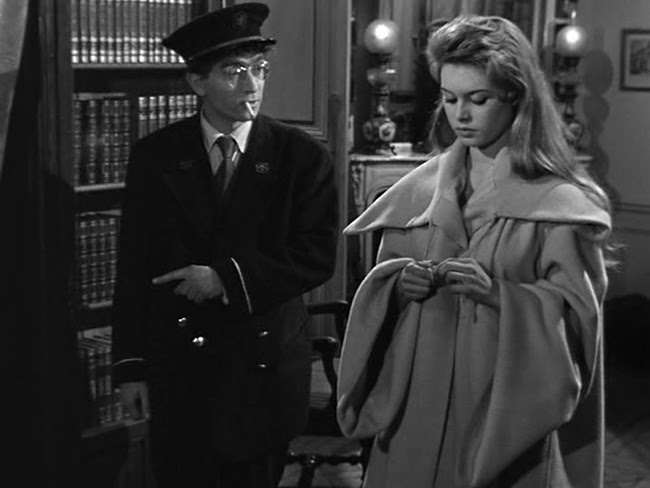 Before he comes to the museum to find her living in his work place, Agnes (Bardot) innocently sells what she thinks is a book from his personal collection in order to pay her expenses while in Paris. Daniel (Gelin) works for the paper and he misinterprets Agnes' meaning when she says she "sold a book" and shows up wearing expensive clothes--she is a writer, having previously published anonymously a book about the people in Vichy, where she grew up. 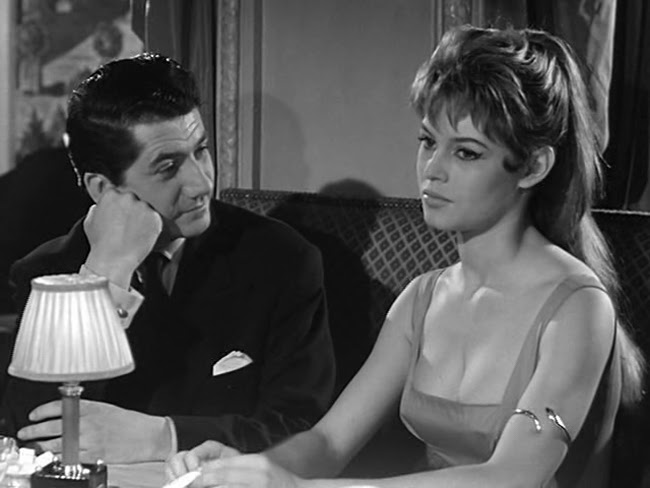 Daniel has a habit of kissing his female editor to get her to do favours for him and he has another girl he's seeing. And he looks down on strippers but comes on real strong to Sophia, Agnes' masked alterego she adopts when she enters a stripping competition, hoping to buy back the Balzac books with the prize money. 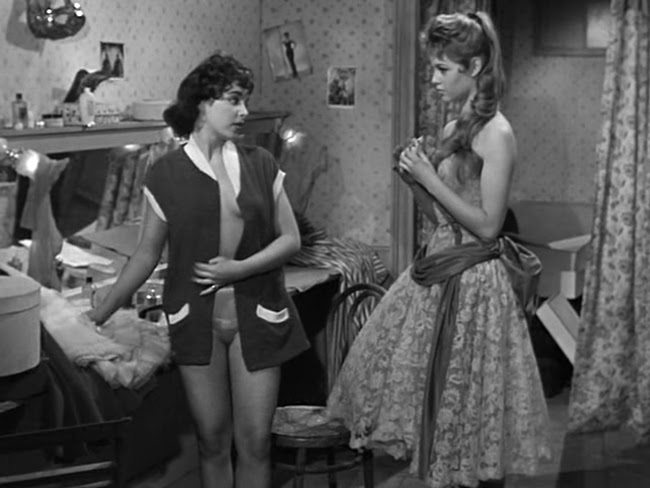 You don't see Bardot naked in this film but there's plenty of nudity--sadly, despite ostensibly having a story about how Daniel ought to accept Agnes as she is, the regular, experienced strippers are all portrayed as caustic and dumb. One of them strides along the catwalk grinning broadly to display her gaptooth which reminded me of something Roger Ebert says in the Criterion commentary for Ozu's Floating Weeds, that characters in movies with bad teeth have a tendency to have big, open mouthed grins to show off their teeth as much as possible. 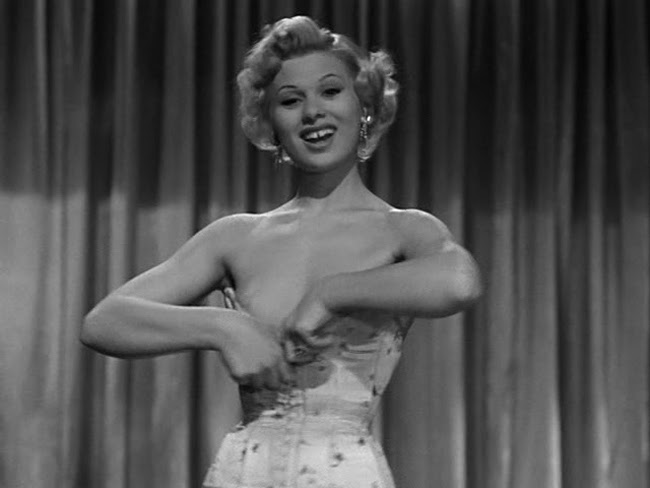 Daniel's obvious duplicity in promising Agnes she's the only girl for him in one scene and then wanting to schtupp Sophia in another is forgiven a little too easily and there's a clear attitude about the film that there are two kinds of women in the world--overgrown babies or trash, even as the film indulges in displays of beautiful naked women, a pathetic double standard. 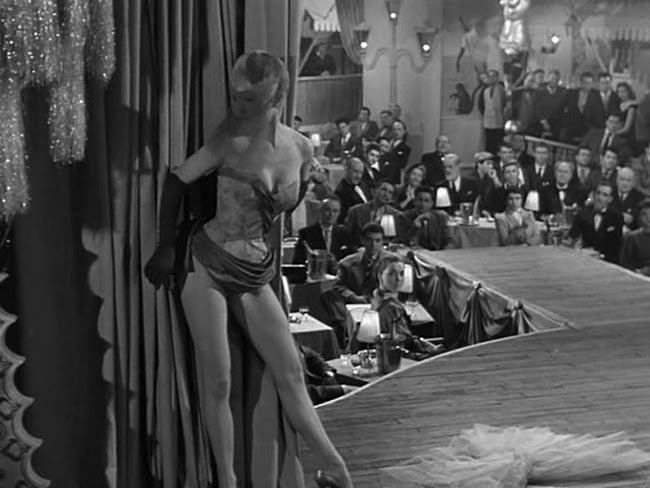 Posted by Setsuled at 4:44 PM
Email ThisBlogThis!Share to TwitterShare to FacebookShare to Pinterest