It's a mere 79° Fahrenheit at the moment here by the sea, 82° just a few miles inland, this, the day after winter solstice. There were a few days last week where temperatures got below 60°. It was pretty exciting. At least it stayed in the seventies yesterday. After sunset, I was even able to wear my coat.

I had to go to Home Depot yesterday to get some light bulbs and someone's Christmas present. There's a Home Depot a few blocks away but I decided to go to one I've never been to before, in a part of town I'd never been to before, so I went to Google and found a Home Depot in Poway, a city within San Diego county that's around fifteen miles from where I live but it felt like visiting Utah. I'd been to what might be called the outskirts of Poway when a friend of mine briefly worked at a school there. There's the school, a little shopping centre, and some residential area just off the 15 freeway on Scripps Poway Parkway. 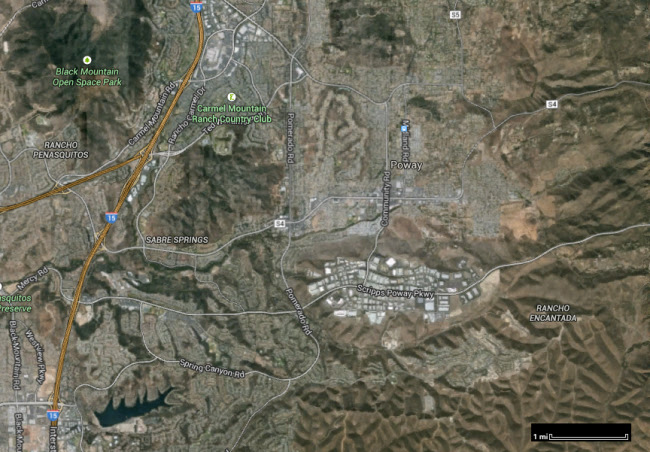 This time I took Scripps Poway Parkway further east, the road going through empty brown hills with islands of residential areas before reaching the bright cluster of buildings on the lower right of the map. In addition to the Home Depot, the buildings were mostly office buildings and warehouses. The only place I found to eat was an In and Out Burger where I got a grilled cheese sandwich and french fries while I finished reading Raymond Chandler's The Lady In the Lake, which I started reading just a few weeks ago. It's a short book, like all of Chandler's Philip Marlowe novels, largely due to the fact that Chandler was a genius at economy. He has an uncanny knack of knowing exactly what he doesn't have to say.

I stopped the car and the sentry threw his piece across his body and stepped up to the window.

"Close all the windows of your car before proceeding across the dam, please." I reached back to wind up the rear window on my side. Degarmo held his shield up. "Forget it, buddy. I'm a police officer," he said with his usual tact.

The sentry gave him a solid expressionless stare. "Close all windows, please," he said in the same tone he had used before.

"It's an order," the sentry said. His jaw muscles bulged very slightly. His dull grayish eyes stared at Degarmo. "And I didn't write the order, mister. Up with the windows."

"Suppose I told you to go jump in the lake," Degarmo sneered.

The sentry said: "I might do it. I scare easily." He patted the breech of his rifle with a leathery hand.

Degarmo turned and closed the windows on his side.

That's the entire encounter with this sentry character. No need to say the sentry wasn't intimidated by Degarmo or that he was threatening Degarmo. It's all there unspoken by the characters and unwritten by the author. And it comes across all the more strongly for it because it makes you part of the exchange, the reader is tasked with reading the situation just like the characters.

This is the fourth book I've ready of Chandler's Marlowe series--I'd been told that The Lady In the Lake is the best of the series but I wanted to read them in the order they were written. The previous three, The Big Sleep, Farewell, My Lovely, and The High Window are all great but mostly for charm, the cleverness of the mystery, Marlowe's intellectual and cagey character, and the rawness of the characters he encounters. The Lady In the Lake may be superior for the lady of the title, the corpse of a woman fished up from a lake that Chandler describes in impressively horrid detail as bearing the effects of having been underwater for weeks. The scene gives an emotional weight to everything else, particularly as Marlowe isn't sure it has anything at all to do with what he's investigating. Add to this Marlowe's fractious encounters with violent, corrupt cops, whose layers of resentment and sadism are brilliantly conveyed to contribute to the impression of a fundamentally unsafe world.

After this, I drove north into isolated little Poway. Cut off by its distance from the freeway to the west, the mountains to the east and south, and golf courses to the north, I didn't see any of the homeless people holding signs asking for food or money that seem to be all over the place now in other parts of the county. I took the slightly eerily named "Community Road" to a little shopping centre with a movie theatre and a Starbucks. I don't think I've ever been more stared at. I mean, I dress weird--I was wearing a frock coat, bow tie, fedora, and spectator shoes--so I'm used to getting some attention, though downtown it's usually no more than a glance before I'm written off as just another weirdo, and of course around the colleges there's always a guy or two to yell "faggot!" at me. In the Poway Starbucks, when I stood up after finishing yesterday's blog entry the place suddenly went completely silent. I saw a table of previously noisy teenagers suddenly staring fixedly at the table top. I went into a grocery store and a young woman was so busy staring at me as she walked that she collided with a shopping cart.

I'd never heard of the grocery store--some place called Stater Brothers. But there was a Sprouts across the street. Mostly the area seemed to have the normal shops and restaurants. Though it seemed like all the people I saw were really pale.