It's Not the Robot or His Man Suit

Another week, another trailer for a resurrected popular fantasy film franchise from a few decades ago. Though in this case, Terminator has already had a few goes--a good television series that was cancelled too soon and a film that seems to have been part of the reason for that show's ending. I haven't seen Terminator: Salvation but I would guess that its failure to connect is the ongoing misconception by people handling the franchise now that the reason the older films worked was the robots when in fact it was really Sarah Connor's story. They ought to have learned from Terminator 3--Terminator without Sarah Connor is like The Odyssey without Odysseus.

The Terminator himself has less personality than the Cyclops and the broad novelty of him has a superficial appeal. He's charming and the scenes of him trying to be human are fun but Sarah Connor's long nightmare, the brilliant, visible change between Linda Hamilton as the innocent waitress in the first film to the hard trained warrior of the second film speaks volumes about a life of constant anxiety over a doom she can ultimately do little about yet must always remain ready on the chance that she can. 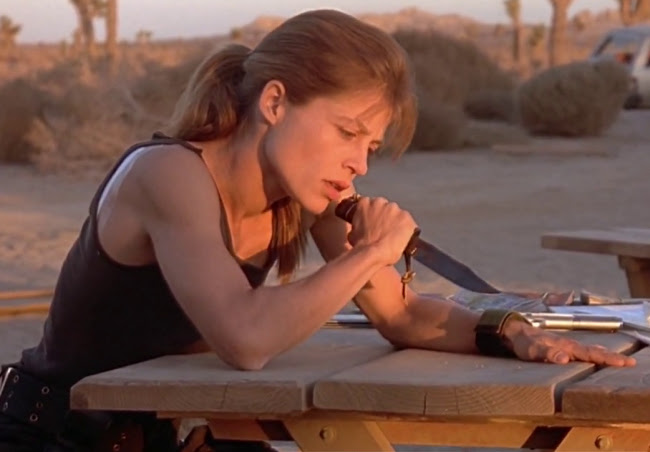 And jeez, she looked like she could really hurt someone. A lot of doubts have been expressed in various reviews and commentary I've read on Emilia Clarke's acting ability due to the relatively small amount of screentime she gets on Game of Thrones and how her scenes generally seem to be carried by supporting characters and her physical beauty. I can't really say much about her acting ability from the trailer (though at least her hair matches her eyebrows for once) but I don't get the vibe of a woman running from and haunted by a future that has dyed the roots of her soul the way I do from Linda Hamilton and, in a different way, from Lena Headey in The Sarah Conner: Chronicles. I do prefer Hamilton over Headey, but Headey was steely and stoic--and, as is so often the case these days, television is developed character far better than contemporary films do.

All in all, there's something cheap about Terminator: Genisys, right down to its stupid name. It feels maybe even more cynical than Sony continually making Spider-Man movies just to retain the rights to the character. I feel like producers got together and said, "Okay, Terminator will never be the money-maker it once was, but we can still get some cash out of it."

Posted by Setsuled at 2:45 PM
Email ThisBlogThis!Share to TwitterShare to FacebookShare to Pinterest