On Four Limbs and Two

I only managed to listen to one Doctor Who audio play this past week and unfortunately I think it's the worst one I've heard so far, Bloodtide from 2001. A Sixth Doctor story so it already has that going against it. It actually had a nice premise--the Doctor goes to visit Charles Darwin on the Galapagos islands at the time he made his famous observations that led to his writings on natural selection and evolution. Unfortunately it goes downhill from there as author Jonathan Morris displays both a superficial grasp of Darwin and evolution and a weak understanding of elements of Doctor Who he was working with.

The main antagonists are Silurians, a humanoid species of reptiles introduced in the Third Doctor television story Doctor Who and the Silurians. The Doctor originally called them Silurians because they had supposedly been hibernating underground since the Silurian period, over four hundred million years ago. In a subsequent episode, the Doctor makes an offhand remark about how it's ridiculous to call them Silurians, this in response to letters written to the show pointing out that such complex sentient animals like the reptilian humanoids couldn't have been at that point of evolution in the Silurian. I think the show would have been better off coming up for an alternate reason as to why they existed in the Silurian than trying to suggest they actually came from a later period. In any case, it's not as bad as one of them triumphantly proclaiming, "We are Silurians!" in Bloodtide.

Though this probably isn't as silly as Charles Darwin being portrayed as a slightly religious young man who's shocked to find he's the first one to come up with the idea that animals evolved--he wasn't.

The Doctor makes references to ape-like human ancestors inhabiting the earth at the same time that the Silurians walked the surface which is completely wrong. Though the Silurians on the series refer to humans as being descendants of the "ape creatures" they were more familiar with, I always took it to mean the Silurians observed them from underground.

The Doctor's companion on Bloodtide is Evelyn Smythe, an audio only companion and one of the few things I like about the Sixth Doctor's run--she's a college professor and middle aged, a nice change of pace from the sexy young companions, though I certainly have nothing against those. But the fun thing about Evelyn, like Liz Shaw and Romana, she has a great well of knowledge to draw from leading to more intellectual exchanges between her and the Doctor. Except in Bloodtide where Evelyn has to have basic things about Darwin and evolution explained to her by the Doctor and she also mentions she was unable to finish reading Moby Dick because she thought Melville was pretentious. Hugely disappointing, though it was fun hearing the Doctor say that Melville was his favourite author even though, if I remember correctly, the Ninth Doctor says Dickens is his favourite. But maybe each Doctor has his own favourite.

I have a bit of a flu to-day, I think. I had it yesterday too and possibly the day before as well. I've been trying to stab it to death with miso soup and NyQuil. But so far it doesn't look like I'm going to be able to go see the Hobbit movie to-night as I planned. Oh, well.

Here's a squirrel I saw in Hillcrest a few days ago: 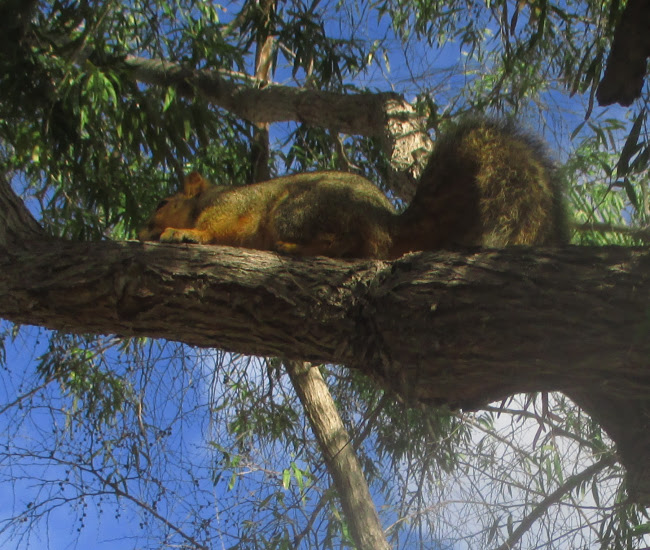