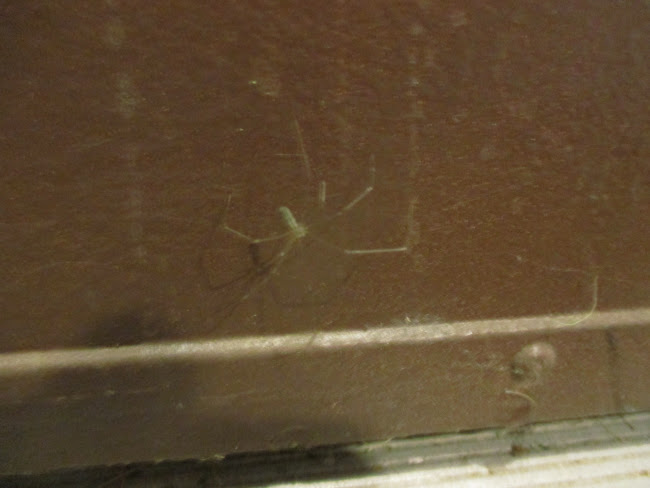 A daddy long legs who came knocking on my front door a few days ago. Come on in and join the party, I said.

While setting up last night for a chess tournament I co-hosted to-day, I listened to another Doctor Who audio play, a Fifth Doctor story from 2001 called The Eye of the Scorpion. He travels to ancient Egypt and attempts to thwart an assassination plot aimed at a princess before she becomes Pharaoh, all the while haunted by the fact that he has no memory of the Princess becoming Pharaoh.

The companion at the start of the story is Peri, who appears with the Fifth Doctor in only two television stories before she becomes the companion most associated with the Sixth Doctor. So Eye of the Scorpion is set between Planet of Fire and The Caves of Androzani. The impression I had when watching was that the Doctor and Peri went to Androzani very shortly after the events of Planet of Fire but since Eye of the Scorpion introduces another companion, Erimem, who appears with the Fifth Doctor and Peri in several other audio plays, I guess there's quite a long gap of time between those television serials. Some day, or rather some quarter of a century, when I have an ungodly amount of time to kill, I'd like to try to watch, read, and listen to all Doctor Who media in continuity. But alas, some things may be beyond the mortal grasp.

Eye of the Scorpion was nice, a decent little bit of running and chasing and mind control. Erimem seems nice but not a terribly distinct personality so far like the other audio only companion, Evelyn.

And once again, the Fifth Doctor is travelling with two young, attractive female companions. He may be the luckiest incarnation of the Doctor. I'm assuming there's Clara Oswald/Amy Pond slash fiction out there? There ought to be.