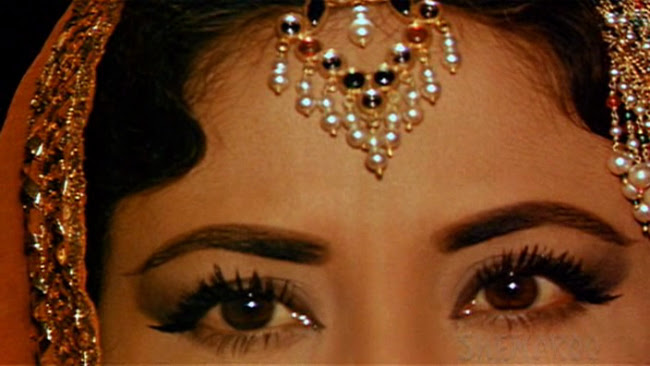 One perennial problem with a society that strictly prescribes degrees of sexual freedom among its strata is that inconvenient babies tend to result. There are a lot of stories around this topic, 1972's Pakeezah (Pure) is a beautiful one with lovely cinematography and set design and great musical numbers.

It was released in 1972, just weeks before its star, Meena Kumari, died from cirrhosis of the liver at the age of thirty nine, but the movie took almost fourteen years to make. There was a big gap in production when its director, Kamal Amrohi, and Kumari divorced in 1964 when the movie was half finished. The differences between footage from the mid-sixties and the footage from the early seventies is noticeable not only for Kumari's noticeably hollower cheeks--she was fatally ill when filming resumed--but for a change from lavish indoor sets to use of realistic location shots. 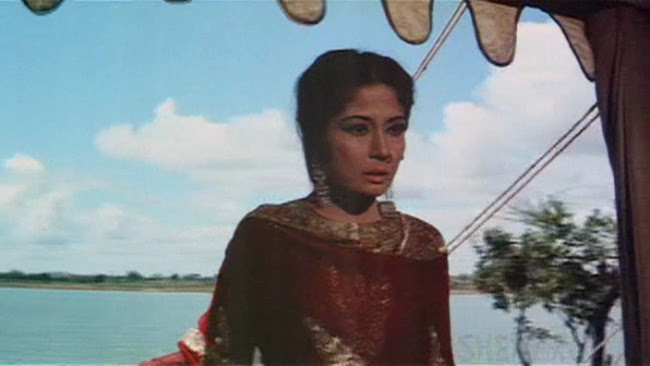 Most of the musical numbers were shot in the earlier block of production with Kumari in top form. Here she is as the young prostitute, Sahibjaan, singing a song to an admiring patron:

Her mother, Nargis (also Kumari), was a prostitute as well--a "tawaif", a sophisticated courtesan institution which its Wikipedia article compares to the Geisha saying, "their main purpose was to professionally entertain their guests, and while sex was often incidental, it was not assured contractually. High-class or the most popular tawaifs could often pick and choose among the best of their suitors." Though I tend to agree with Roger Ebert who said in his review of Memoirs of a Geisha, "Here is a useful rule: Anyone who is 'not technically a prostitute' is a prostitute." 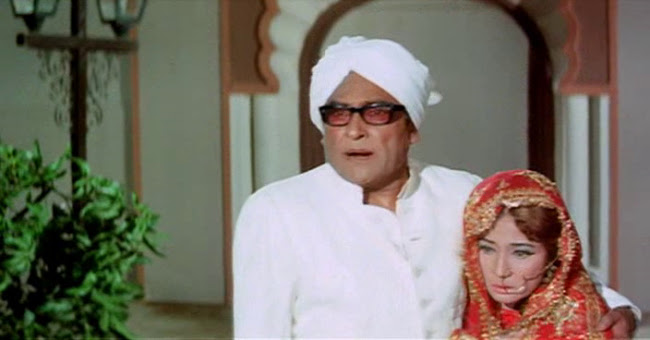 Certainly Nargis is close enough to a prostitute to be rejected by her lover's Muslim family. She dies giving birth to Sahibjaan in a graveyard where the baby is recovered by Nargis' sister, Nawabjaan (Veena), who raises her in the brothel. She allows a maid to sell off Nargis' meagre possessions among which a note the woman wrote for her lover is discovered only by the time Sahibjaan has grown into a teenager. It's delivered to her father, Shahabuddin (Ashok Kumar), who attempts to meet his daughter but is rebuffed by Nawabjaan, now in charge of the brothel. 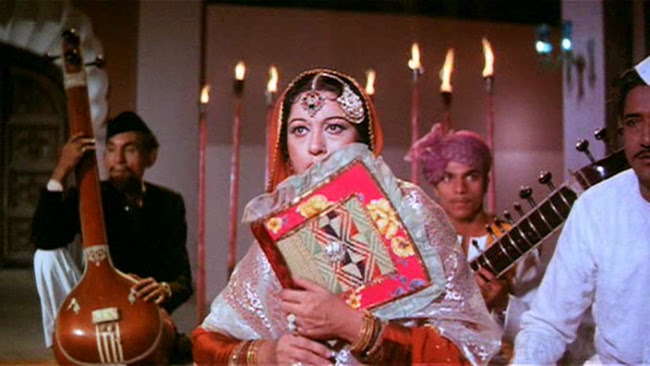 The whole brothel flees to another town. On the train, a handsome young forest ranger played by Raaj Kumar, who has a profile like John Barrymore, stops in the sleeping Sahibjaan's cabin to warm himself by her furnace. 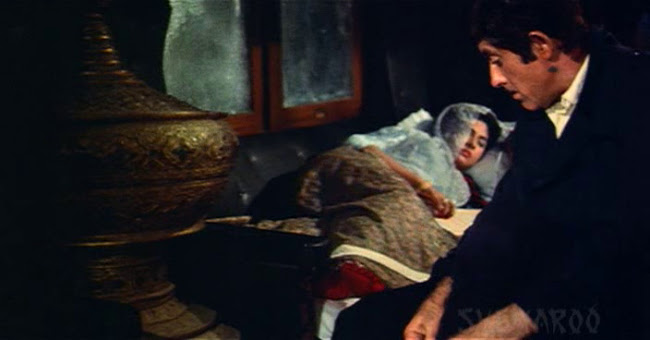 He falls in love with her bare feet and leaves a note between her toes telling her so but not revealing his identity. Now, this may sound really creepy to you, but this is an old fashioned fantasy romance so Sahibjaan takes this note as a treasure from her soul mate.

There is a great feeling of unselfconscious fairy tale to the story. My favourite fairy tale moment is a cobra that is shown sneaking into Sahibjaan's room at one point but is never mentioned in dialogue. It just takes up residence on top of her birdcage early in the film and then strikes a man who's trying to attack Sahibjaan later in the film. The friendship of a cobra is invaluable. 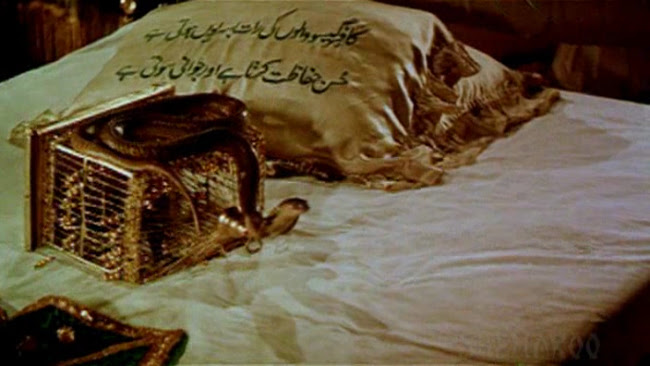 The movie ends up being a pretty effective tale of the injustice in ostracising women for having unmarried sex. The climactic musical number is surprisingly punk--not in the kind of music but in its staging and middle finger given to orthodoxy. The whole movie is available on YouTube with English subtitles here.