Finally got around to watching yesterday the Blu-Ray copy of The Empire Strikes Back I bought a few months ago. I wanted to watch it in the middle of the day so I could have the sound up to a proper volume without being incredibly rude to the neighbours. Though sound doesn't seem to travel at all through the walls of the apartment and the people upstairs with their routine random jackhammer noises at 2am don't exactly seem like courtesy is a priority. In addition to being the Blu-Ray, this is the first time in a long time I'd watched George Lucas' special edition--unfortunately what I call the "classic" edition (like it?) has of course not been released in high definition.

I at last had definite confirmation on something I'd suspected for a long time, which is that the special edition shot of Darth Vader coming off his shuttle into the Star Destroyer landing bay is in fact footage from Return of the Jedi--the detail on the Blu-Ray is enough that you can see the face of the officer in front and he's clearly the same guy Vader terrifies in the Death Star hanger at the beginning of Return of the Jedi. 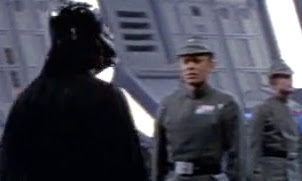 I doubt I'm the first person to notice this. Which makes the already seemingly pointless addition of this scene seem even more pointless. Of all the Star Wars nitpicks I've heard in my life, I don't think I've ever hear anyone say, "How did Vader get to his Star Destroyer while Leia, Lando, and Chewie were rescuing Luke?"

It probably really was a pain in the ass to light these sets, actually. But light really does distinguish one location from another in Empire Strikes Back rather well, from the misty murk of Dagobah to the perpetual red sunset on Cloud City, exterior and interior.