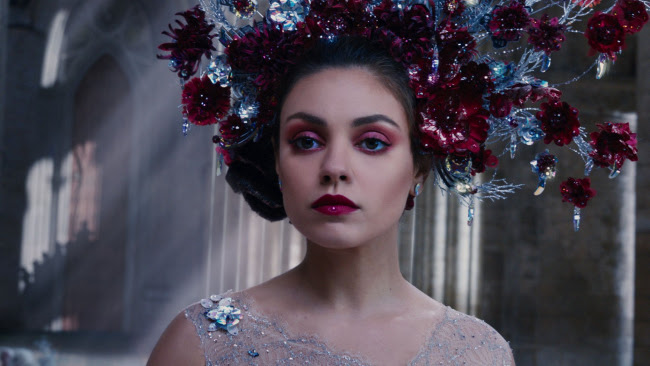 What is the new old fashioned way? I think that's the question the Wachowskis asked themselves when they made 2015's Jupiter Ascending, which apparently they were commissioned by Warner Brothers to make as the first film in a potential franchise. Judging from the meagre performance at the box office it's not likely to be spawning sequels any time soon. It is a fundamentally flawed film, an improvement over Cloud Atlas, the previous film of the Wachowskis', but still fails to capture the vibrant inventiveness of Bound and the first Matrix film.

I wonder if Jupiter Ascending was meant to be Warner Brothers' answer to Guardians of the Galaxy, the two films must have been made over roughly the same period of time. Both are space operas involving a fish out of water, earthling protagonist, both seem to have been heavily influenced by Farscape. Guardians is the superior film but there are actually some things I like about Jupiter Ascending better--it's not as sappy; the costumes, makeup, and set designs are far more beautiful; and it makes that earthling protagonist female, which is always a plus in my book.

However, the film indulges in a kind of story device that has been avoided by makers of fantasy films for over decade now and has been vociferously denounced by the average analytic geek even after it's been pretty much dead in Sci-Fi/Fantasy for so long: the damsel in distress. Jupiter Ascending is made up of a prelude, four acts, and one Terry Gilliam tribute interlude. In each act, Jupiter Jones (Mila Kunis) is vulnerable in a strange, bewildering, threatening situation while Caine (Channing Tatum) is desperately trying to rescue her. In a sense, he's the Aeryn Sun to her John Crichton--he was genetically engineered as a warrior and has trouble dealing with the strong emotions she makes him feel while she inserts the random, earthly wisecracks that worked so well in Guardians of the Galaxy and Farscape. Unfortunately, the Wachowskis made the mistake of thinking that what made John Crichton and Star Lord work so well is that they're normal guys in a strange situation. Actually, neither one of them is normal which, in turn, actually makes them normal--human. Star Lord in some ways is still the little kid who was abducted by aliens while Crichton is a test pilot, kind of the classic definition of someone who's not normal.

Jupiter cleans toilets for a living. It's very, very clear that the Wachowskis have never supported themselves by cleaning toilets, the generally clean homes and bathrooms shown and Kunis' invariably perfect hair, makeup, and clothes, and her enormous home her Russian emigrant family live in in New York city, sabotage any attempt to relate to her as an average working dame. Though it's not quite as disastrous as when she has the means to rescue herself and her family from cleaning toilets for a living and doesn't take the opportunity for unexplained reasons.

Also, Star Lord and Crichton have agency. Sometimes they need rescuing but they have ideas that move themselves from place to place, they contribute to plans the group is making. Jupiter is basically passed from one villain to another like a potato while Caine is struggling to catch up. I don't mind a damsel in distress story on principle, one of my favourite movies of all time is the Errol Flynn Robin Hood. But Tatum's character doesn't have the charm of Errol Flynn and the battles he engages in aren't as interesting. The movie clearly banked on Jupiter carrying the personality load and while I do think Kunis is perfect casting for that the screenplay cuts the floor out from under her by attempting to make her some theoretical idea of normal.

Maybe they were aiming for a Twilight style young adult fiction where the protagonist usually is this glossy, boring version of normal. But I think to write that kind of boring character and story properly you have to also be a boring person, much more boring than the Wachowskis.

Sean Bean is a welcome respite from Tatum in a supporting role and there's a cute scene with bees. The main Sci-Fi concept of the film, which I won't spoil for you, is interesting and somewhat reminiscent of Dune but much more vicious. As usual when critics say a movie is confusing Jupiter Ascending isn't remotely confusing. If the Wachowskis had remembered what made Bound and Matrix good was that the protagonists were a bit larger than life, Jupiter Ascending might have been a really good film.