When a Movie Flies 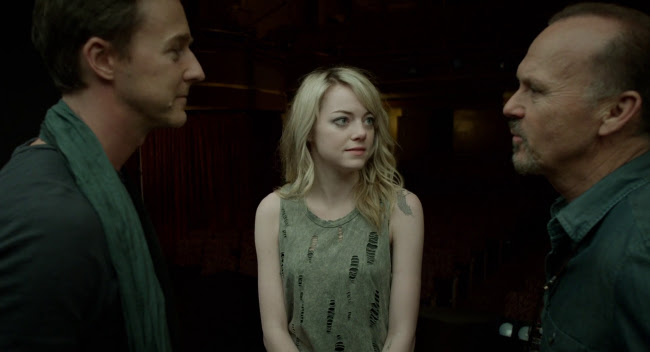 So I was wrong. Maybe not surprising considering I hadn't seen most of the movies but even if I had seen Birdman, which I watched after the Oscars last night, I don't know if I'd have predicted it to win. Though as Harry Knowles tweeted after the announcement of its win, it makes sense given how many actors are Academy voters. The movie is a massive, dripping, love letter to actors. In fact, acting is about the only category in which I think it deserved to win and about the only category in which it didn't. Michael Keaton not winning is truly an egregious snub, I suspect it's due to the fact that, even though it was a vulnerable and demanding role, it was far too subtle and made use of the notoriously under-appreciated talent of comedic timing. Still, wow, amazing to see Keaton back from what I had assumed was retirement. And he's good.

Also great in the film are Edward Norton and Emma Stone even though the screenplay really short changed them, particularly in Stone's case. Norton starts off as a great, slightly supernatural parody of actors like, well, himself. Norton is notorious for wanting to leverage his respected talent into taking creative control in his films--rumour has it that's why he didn't come back as the Hulk, which makes Birdman's tale of an actor known for playing a superhero all the more appropriate. Stone, meanwhile, is a lazily sketched junkie misfit daughter with whom her father, Keaton, has trouble connecting. Nevertheless, Stone knocks it out of the park and I'd love to see what she could do with a better written role of this kind. Of course, she's a superhero movie veteran herself, having appeared in the Marc Webb Spider-Man series that has just been jettisoned. I haven't seen those, in fact I think this is the first time I've seen Stone in anything but I can definitely see why so many directors want her in their films.

Birdman is about the movie industry adjusting emotionally to the rise in prominence of the superhero film and thematically it's a bit like a superhero film, kind of the opposite of the Book of Job where self validation is the goal. Keaton's character telling his ex-wife a story about imagining being in a plane crash on which George Clooney also happened to be a passenger, and then Keaton's daughter seeing the next day only Clooney mentioned in the headline, is just pathetic enough to make you want Keaton to fight for his ego's validation. An embarrassing couple of passive aggressively written scenes of confrontation between a villainous theatre critic (Lindsay Duncan) and the two male leads seal the deal on the underdog cache.

One thing I find really strange is that I don't see Wikipedia or any articles connecting Birdman with the Hanna Barbera character or mentioning Harvey Birdman, the parody series that aired on Adult Swim a few years ago. The film Birdman's mask is a little different but it clearly looks like it was meant to be the same character so I don't know what gives.

As for the Oscar ceremony itself, astonishingly badly written jokes for host Neil Patrick Harris, mostly terrible or average singing with the very notable exception of Lady Gaga who took command of a Sound of Music medley as well as really anyone could have. She hit all the notes without having that slightly melted cassette tape sound standard to Broadway-esque singers, demonstrated by Neil Patrick Harris and Anna Kendrick at the beginning of the show. Being a rock singer doesn't necessarily mean you can carry a demanding show tune but Gaga definitely has the goods.