The Vulcan for Us 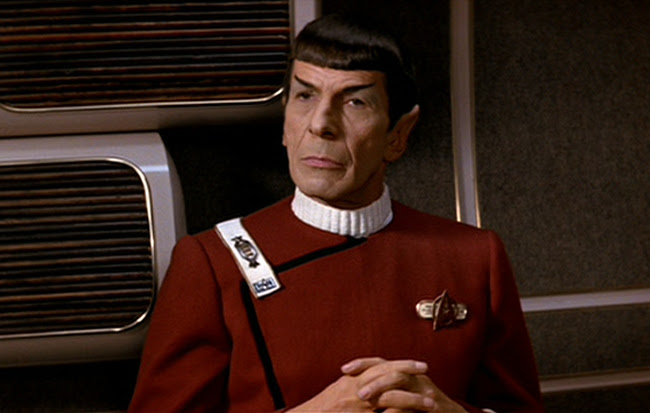 So many people are posting images and quotes from Star Trek II to-day because Leonard Nimoy has died. He was best known for playing Spock and Spock's death in Star Trek II is certainly one of the most memorable deaths in cinema history and one of the most memorable funerals and eulogies because there was something profound in our love for Spock that had a lot to do with Leonard Nimoy.

Spock was cool, in the old fashioned sense of the word, implying a certain economy of movement and expression. Nimoy was an actor who knew the value of restraint and it served him well--it served all of us well. The scene in Star Trek II where Spock takes the "needs of the many outweigh the needs of the few" to its logical conclusion is a perfect expression of what his character had been all along--a consummate scientist. The beautiful ideal of scientific discovery which puts aside the ego and psychological comfort, reflected in the Vulcan renouncement of emotion. It's true, we all need love and validation, but that makes Spock all the more admirable and Nimoy's portrayal of the character all the more beautiful. The version of Spock played by Zachary Quinto, who is much more about the modern compulsion to indulge in emotion and the need to find self-worth, is good and interesting but reminds us of what we've lost to-day with Nimoy's passing.

He was one of my favourites as a child. I really think what Nimoy accomplished with the character directly influenced one of the better parts of my nature and I think that's true for many, many people. We could say he passed his katra to humanity.