The Paternal Hand to Push Us Down

Leviticus 18:22: "Thou shalt not lie with mankinde, as with womankinde: it is abomination."

However, the vast majority of Leviticus is really complicated instructions on how and when to sacrifice livestock to God and what to do with all the blood.

Leviticus 1:15: "And the Priest shall bring it vnto the altar, and wring off his head, and burne it on the altar: and the blood thereof shall be wrung out at the side of the altar."

I wonder how many of the people who cite Leviticus to condemn homosexuality are as scrupulous in their animal sacrifice.

So in Exodus, God starts spending time laying down some commandments and then in Leviticus he really works himself into a lather. This is all after he's demonstrated his power to destroy and punish even the Pharaoh with plagues for doing what God has forced him to do:

Exodus 4:21: "And the Lord said vnto Moses, When thou goest to returne into Egypt, see that thou doe all those wonders before Pharaoh, which I haue put in thine hand: but I wil harden his heart, that hee shall not let the people goe."

And this goes back to my observation that God spent a lot of time punishing people for no apparent reason. But it started to make sense to me when I started thinking of it in terms of God securing obedience--he has to break humans like wild animals. The point of his complicated instructions and physical abuse and punishing people for what he forces them to do--the point is to establish control and dominance through fear of pain. Now fruit from the Tree of the Knowledge of Good and Evil being forbidden makes sense, because you have to have a sense of right and wrong to be terrified of the fact that God is totally amoral at the end of the day. It's no wonder Beelzebub says to Satan in Paradise Lost:

But what if he our Conquerour, (whom I now
Of force believe Almighty, since no less
Then such could hav orepow'rd such force as ours)
Have left us this our spirit and strength intire
Strongly to suffer and support our pains,
That we may so suffice his vengeful ire,
Or do him mightier service as his thralls
By right of Warr, what e're his business be
Here in the heart of Hell to work in Fire,
Or do his Errands in the gloomy Deep;

Reading the bible has made me appreciate Raiders of the Lost Ark more--that film, much more than the other Indiana Jones films, gives the impression of a God who isn't particularly interested in the doings of human beings, only in maintaining a respect for his might. I never had the impression that God spared Indy and Marion at the end because they were good people, it was because Indy realised they had to avoid looking at the power of God. Which is mentioned in Exodus, too, that you shouldn't look at God directly--and I can't help hearing Dennis Hopper in Blue Velvet saying, "Don't fucking look at me!"

Since one of the most striking things about Raiders of the Lost Ark is the vulnerability and imperfection of Indiana Jones and Marion, the contrast between these poor humans tumbling their way through an adventure and all powerful, abusive forces is rather resonant. This may be at bottom the problem with Kingdom of the Crystal Skull in that it really lacks this quality.

I've also been reminded of Sauron in the Lord of the Rings books, the impression of some baleful, fiery being crushing poor, helpless little hobbits.

I'm a little disappointed the King James Bible so far refers to the ark as the "Ark of the Testimony". I guess maybe I'd need to read the Catholic version to get the "Ark of the Covenant" but it's the 1600s I'm currently researching. Anyway, there's a kind of crossover universe excitement as I recognise people and things I already know from movies and other stories. I know I'm bound to picture Delilah as Hedy Lamarr and David as Gregory Peck.

Incidentally, Raiders of the Lost Ark is the only time we see Indy in a blue double breasted suit and a grey hat: 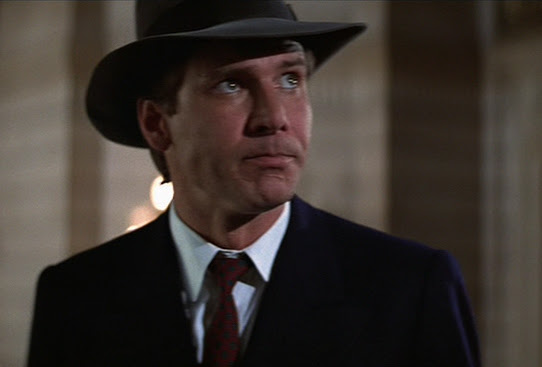 He wears this outfit twice in the first movie. Something about it suggests a whole different back story for the character than is giving in subsequent films and television episodes.

Posted by Setsuled at 6:14 PM
Email ThisBlogThis!Share to TwitterShare to FacebookShare to Pinterest