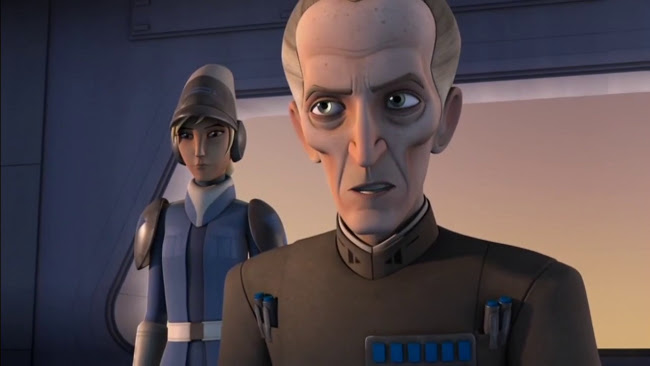 Alongside "Ride of the Old Masters", "Call to Action", the latest episode of Star Wars: Rebels, stands alone in the series so far in actually making the Empire feel like a threat to the protagonists. This time it's due to a very gratifying guest appearance from Grand Moff Tarkin, who's voiced by an actor named Stephen Stanton, the same person who played the character on Clone Wars. He does an adequate job of imitating Peter Cushing's tendency to roll his Rs very slightly though I have to hand more credit to the animators this time for really capturing the feeling of the character, albeit an exaggerated version.

It's certainly satisfying watching him execute the two Keystone Cops in Imperial uniform whose over the top ineptness have done much to sabotage the show's basic premise of a handful of rebels desperately trying to make a difference in the shadow of an oppressive Empire. It's a nice start, this episode, I hope the show builds on it. I'd be happy to see more of Tarkin.

I only had time to listen to one Doctor Who audio play this week, the 2002 Eighth Doctor story The Time of the Daleks. An entertaining story in spite of the fact that I wasn't completely in love with the convoluted plot to explain why the Daleks are trying to wipe William Shakespeare from history. But it was kind of fun hearing Daleks quote Shakespeare. Anyway, this explains why Orson Welles didn't recognise a Shakespeare quote in the Mark Gatiss story, but I think the next audio play has more of his mess to clean up.

This morning I read "THE CRIPPLE AND THE STARFISH", a new story from The Sirenia Digest, a nice portrait of a court of vampires meeting in the ruins of a hotel. It captures the idle ennui that characterises so many good vampire stories and becomes an analysis of the soul, or what quality of the mind it is we choose to call a soul. It's mainly a nice mood piece about having long since reached the end of an existential rope.

Posted by Setsuled at 12:41 PM
Email ThisBlogThis!Share to TwitterShare to FacebookShare to Pinterest