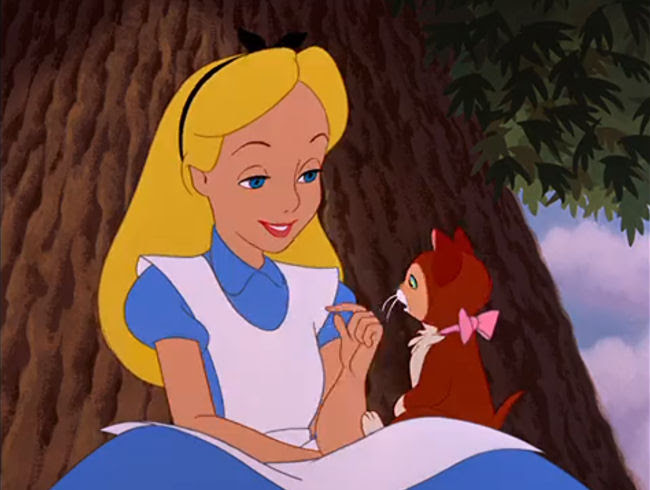 Once more down the rabbit hole, friends. My survey of Disney's animated canon brings me now to their 1951 adaptation of Alice in Wonderland, a film I've written about numerous times, most recently just two years ago. My love for the movie can be seen in one of the few kitchen items I brought in my luggage to Japan, this coffee cup: 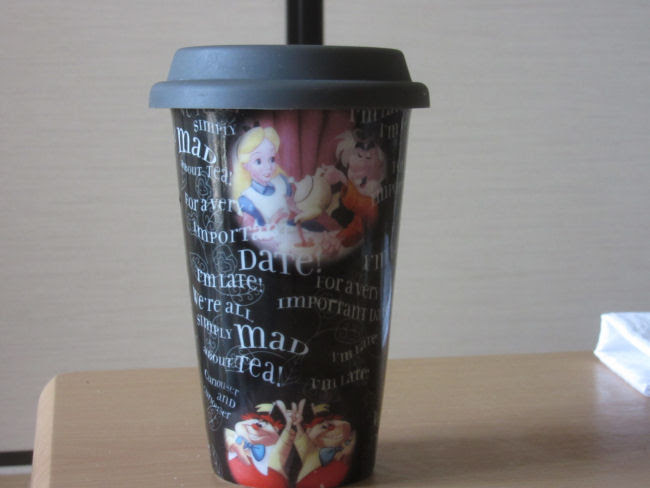 This was a gift my parents brought back from Disneyland some years ago. I was happy to see plenty of Alice in Wonderland merchandise here in Japan, too. Not long after arriving I compulsively purchased a pad of pop-up notes at Daiso, the 100 yen store. 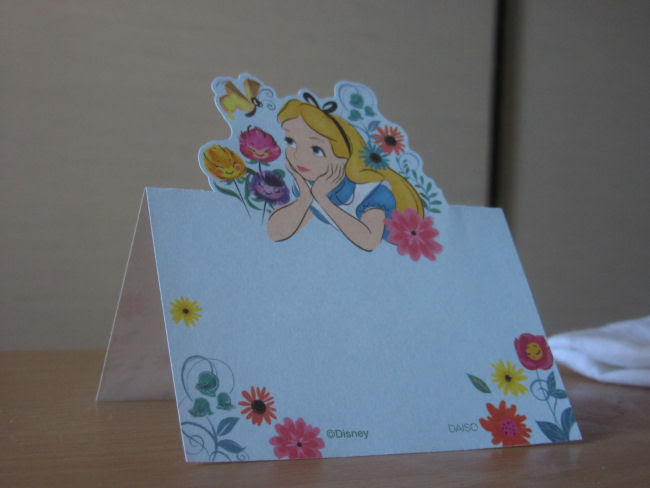 Teaching at junior high, I've been delighted to see how many girls have Alice in Wonderland pencil cases and notebook dividers. Here, at least, the Tim Burton live action film has not supplanted the 1951 adaptation in the public imagination. When I was a kid in the 80s, my friends and I would watch Disney cartoons from the 40s and 50s without any awareness of how old they were. Here in Japan, it's the same, and children are equally as familiar with Cinderella as they are with Frozen. Live action Disney movies don't seem to be quite as well known. All of this was a pleasant surprise because I'd recently had an experience that led me to expect otherwise.

I had a series of tutoring jobs before coming to Japan. One of my students was a fifteen year old Chinese boy whom I tutored in his very large new home in one of the more affluent areas of San Diego. One of the reasons gentrification is--or was--getting so out of hand in California is an influx of investors from China and other countries suddenly buying a lot of real estate. I drove to this kid's house every night, his whole neighbourhood was so new it wasn't even on satellite view on Google maps yet. He was a good kid and I always felt bad for how little free time he had, his parents kept him under a pretty strict regimen. He was learning English but he'd also somehow gotten himself into an advanced English literature class at an elite private high school. My job was not only to tutor him in English as a second language but also to assist in his comprehension of recent, snooty postmodernist novels (one being a novel called We are All Completely Beside Ourselves, the title of which was alone a nightmarish layering of references for the poor guy), Macbeth, and his history homework, which consisted of watching a smug YouTuber called John Green whose "Crash Course" videos are a perfect storm of inscrutability for the English language learner featuring complex English in rapidfire delivery riddled with ironic asides and jokes based on politically oriented presumptions spoken in the same tone as facts. Green's videos are bad enough to confuse a native speaking high school student. In the same breathe he talks about ancient currency, condemns ancient leaders for often being male, and makes a crack about his luck getting dates as a teenager.

When I brought up the idea he didn't seem enthusiastic and told me that he'd already seen the movie, meaning the Tim Burton one. Speaking recently with other young people I've discovered the Burton film has solidified for one reason or another in the minds of people under 25 as the story. And many are understandably underwhelmed. Burton's movie, more of an action film about a young woman fighting the forces of darkness, has little actual relevance to the lives of school children. I assured him the book was very different and we started reading. Very quickly I could see, and in spite of himself, it was connecting with him. When we came to this part of chapter three he was provoked to genuine laughter:

“In that case,” said the Dodo solemnly, rising to its feet, “I move that the meeting adjourn, for the immediate adoption of more energetic remedies—”

“Speak English!” said the Eaglet. “I don’t know the meaning of half those long words, and, what’s more, I don’t believe you do either!” And the Eaglet bent down its head to hide a smile: some of the other birds tittered audibly.

It was one of the most rewarding moments so far in my brief career as a teacher. I knew the job I had with him was practically impossible but I decided to focus on showing him that literature, and English, could be something more than a chore or a grade to be earned or even money. It could be a friend. 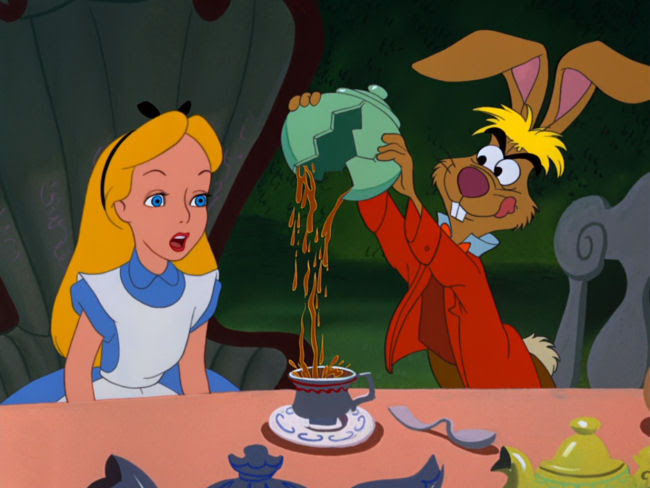 The thing adaptations almost never understand about the books, including the 1951 film, is that the books present the senselessness of an adult world from a child's perspective. Even good children's fiction is often more about the challenges of an adult than a child. Sometimes a child can enjoy such fiction because, after all, kids are instinctively looking for models of how to behave as an adult. But Alice's Adventures in Wonderland is one of those rare works that capture a child's experience. Among many other things. 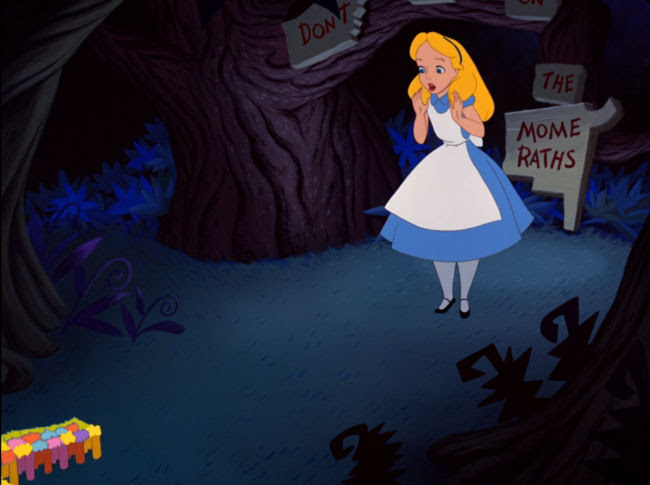 Another facet of Carroll's genius is that the books can be many different things to different people. Alice's existential questioning in the beginning of the book is deeply evocative for anyone of any age. The commentary on cliques in "The Garden of Live Flowers" in Through the Looking Glass is an amusing sociological satire and the Queen of Hearts' every line is a potent critique of tyrannical mindsets. Another reason the books endure in the mind so much is their curious scarcity of sentimentality. The opening and closing poems are really the only time you get anything like the infamous Victorian sentimentalizing of children. But Carroll knew the wistful remembrance of expired childhood had little to do with a child's point of view, by definition. The Alice books are also two of the few 19th century novels to feature a female protagonist who never falls in love. The absence of these things has the result of making them more conspicuous in the mind of the reader, which is one reason I think people obsess with discussing Carroll's possible attraction to Alice Liddell. 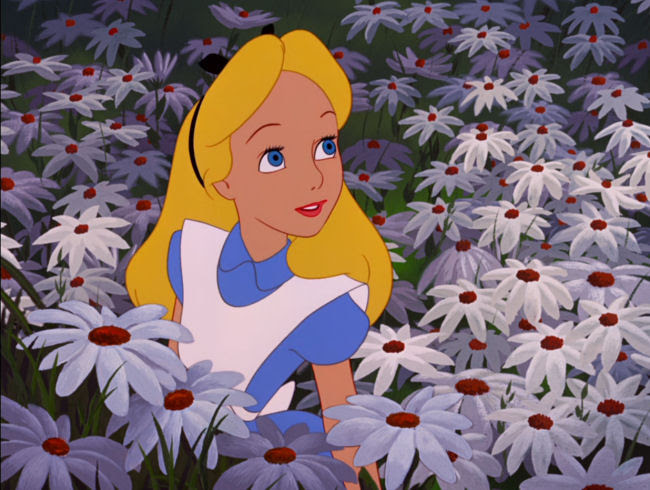 The 1951 film stays away from romance but it does indulge in some sentimentality, and very successfully, when it comes to the beautifully animated daisies in the opening sequence and the title song. That song, of course, has become a jazz standard and it's hard not to be wooed by the gentle melancholy of Bill Evans' interpretation:

Or the brisk affection in Oscar Peterson's:

The film also features great visual design by Mary Blair and some of the best executed comedy moments of any Disney film.

1951's Alice in Wonderland is available on Disney+.

My ranking of Alice in Wonderland film adaptations can be found here.

Posted by Setsuled at 11:38 PM
Email ThisBlogThis!Share to TwitterShare to FacebookShare to Pinterest