Whatever You Wish For You Keep 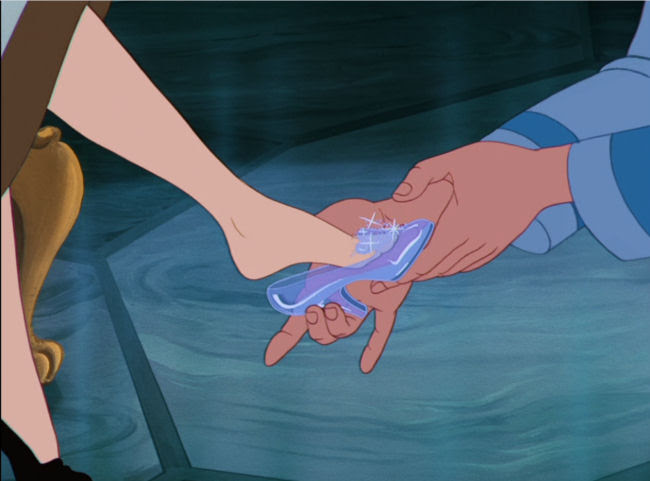 Be good to the little birds and mice and in time you may be Queen. Such is the wisdom one may glean from Disney's 1950 animated feature, Cinderella, the studio's first feature length animated story since 1942's Bambi. Beautifully designed and brilliantly animated, the ancient folk tale is reworked to be a commentary on managerial philosophy, a curious tack for Disney to take considering the film follows the aftermath of the 1941 animator's strike which was in part responsible for the studio's sole reliance on an anthology format for its features between 1942 and 1950. The film also marks the introduction of the second of the Disney Princesses, a full thirteen years after the first one was introduced in Snow White. The wise, strong willed authority represented by Cinderella is also a marked shift from the guileless maiden from the 30s. 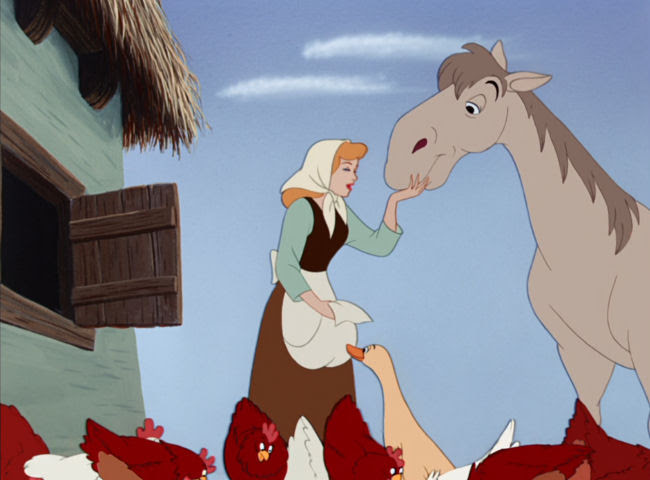 Like both Snow White and Sleeping Beauty, a lot more time is spent on the antics of the princess' supporters than on the activities of the princess herself. In this case, a series of brilliant segments involve that classic scenario of the cat versus mice. The cat is given the name of Lucifer, a rather potent predictor of his lot in life, and his nemeses are the mice Jaq and Gus (both voiced by Jimmy MacDonald). Whether trying to gather corn seeds or attempting to rob Cinderella's stepsisters, the mice contrive strategies to stay one step ahead of feline jaws. But the actions of the mice are dictated by their love for Cinderella (Ilene Woods). One of the first things we see her do is induct a new member into her community of followers, Gus, by rescuing him from a trap, giving him a name, and putting clothes on him. 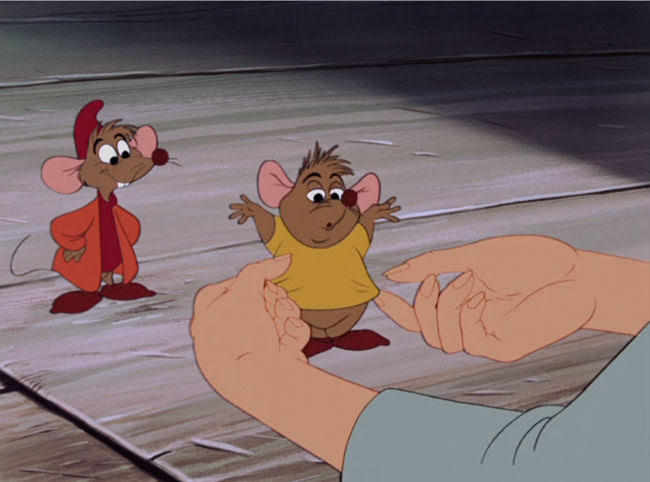 He's terrified of her at first, of course, but Cinderella has Jaq "explain" things to him. She doesn't ask if he wants a name and clothes and he seems to accept them out of purely good nature or perhaps gratitude for his rescue. Or perhaps he's a little in awe of her. Cinderella is clearly comfortable in her role as a leader. We also, in a marked departure from the affable Snow White, see her actually complain about the treatment she receives from her stepmother (Eleanor Audley). 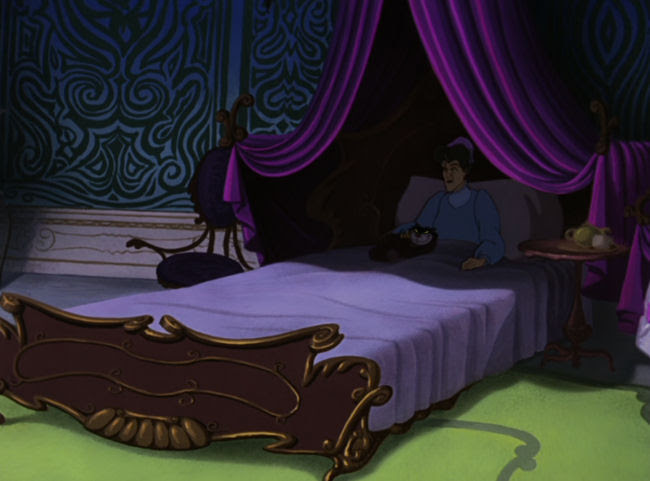 I love that evil wallpaper.

This is also a departure from Cinderella's character as portrayed in the 17th century Charles Perrault rendition of the tale upon which the film is nominally based. In that story, Cinderella quietly endures her suffering and is unfailingly kind and considerate to her stepsisters, however badly they treat her. This seems to be a conscious change on the part of the filmmakers who sought to portray Cinderella as more "rebellious" than Snow White. At one stage in story development, Wikipedia quotes screenwriter Maurice Rapf as saying;

"My thinking was you can't have somebody who comes in and changes everything for you. You can't be delivered it on a platter. You've got to earn it. So in my version, the Fairy Godmother said, 'It's okay till midnight but from then on it's up to you.' I made her earn it, and what she had to do to achieve it was to rebel against her stepmother and stepsisters, to stop being a slave in her own home. So I had a scene where they're ordering her around and she throws the stuff back at them. She revolts, so they lock her up in the attic. I don't think anyone took (my idea) very seriously."

I would say Rapf is being modest. Incidentally, the quote is strikingly reminiscent of one ascribed to Walt Disney on the page about the animators' strike:

"In the 20 years I've spent in this business I've weathered many storms. It's been far from easy sailing. It required a great deal of work, struggle, determination, competence, faith, and above all unselfishness. Some people think we have a class distinction in the place. They wonder why some people get better seats in the theatre than others. They wonder why some men get spaces in the parking lot and others don't. I have always felt, and always will feel that the men that contribute most to the organization should, out of respect alone, enjoy some privileges. My first recommendation to the lot of you is this; put your own house in order, you can't accomplish a damn thing by sitting around and waiting to be told everything. If you're not progressing as you should, instead of grumbling and growling, do something about it." 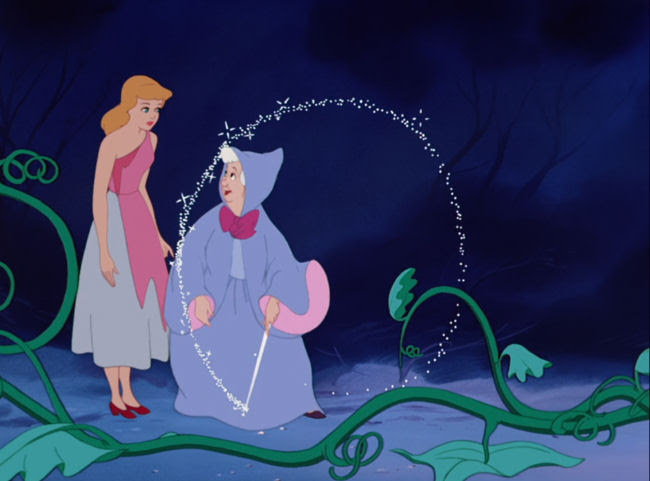 One might argue that the Fairy Godmother (Verma Felton) does indeed deliver Cinderella's good fortune on a silver platter since the film doesn't have any dramatic scenes of the girl rebuking her stepmother. But maybe the absence of any such scene isn't a sign of Cinderella being weaker, just smarter.

Nevertheless a prince ought to inspire fear in such a way that, if he does not win love, he avoids hatred; because he can endure very well being feared whilst he is not hated, which will always be as long as he abstains from the property of his citizens and subjects and from their women.

We're told at the beginning of the film that the stepmother and stepsisters squander the wealth of Cinderella's deceased father and we know they spend most of their time sleeping, eating, or squabbling. Cinderella may complain when she's alone with her animal subjects but when the stepmother tells her to clean the rug and the tapestries she politely says "Yes" and gets to work. 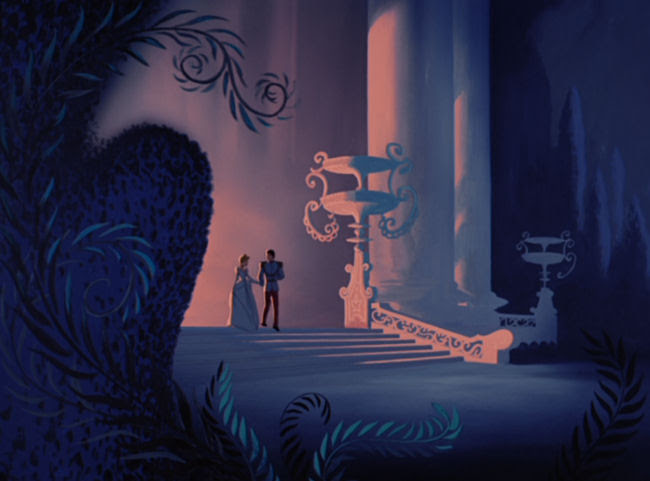 "A Dream is a Wish the Heart Makes" is one of the film's memorable songs and it subsequently became one of the studio's signature songs. Cinderella doesn't rebel in act but she rebels in mind. The dream is represented by her animal fiefdom--this is how she'd run things if she were in charge; she defines herself as a leader in contrast to her stepmother. She rules with grace and compassion. And we can see from her confident manner at the beginning of the film that she's been at it a long time. She really is ready to be Queen and the old king (Luis van Rooten) is rewarded for his strategy in staging a ball for his son (William Phipps/Mike Douglas) to choose a bride. Incidentally, Prince Charming has a remarkably minimal presence in he film, having only a couple lines of dialogue. He isn't even present for the shoe fitting scene in the climax. But that doesn't matter because this isn't really a story about two people falling in love--he's a pawn in Cinderella's rise to power. 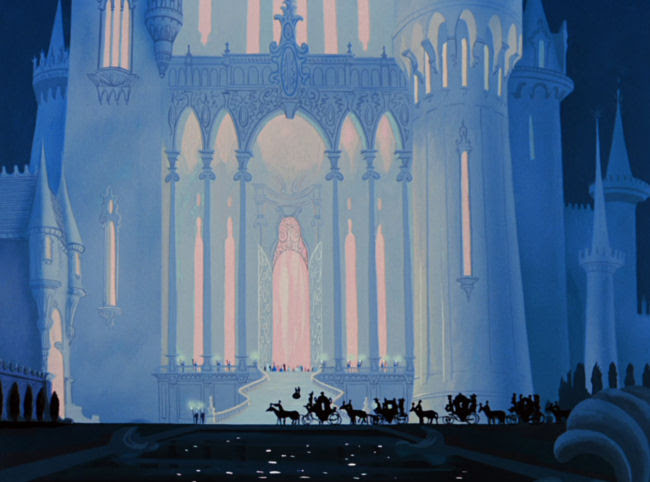 Another product of Cinderella's dream is her Fairy Godmother, the cosmos delivering a helping hand as a reward for Cinderella's good behaviour. Of course, when talking about dreams as a prelude to positive change, one can't help thinking, "What happens to a dream deferred?" the line from Langston Hughes' famous poem:

What happens to a dream deferred?

Or does it explode?

Is Cinderella's strategy really applicable for everyone? Charles Perrault presents two morals for his version of the story, a poem praising beauty as "to the sex a treasure" and another commending the wisdom of abiding by the advice of godmothers and sires. Cinderella may be disadvantaged at the beginning of the story but she has two things going for her--beauty and a Fairy Godmother. But really, that's just one thing; she has the blessing of Heaven or nature, if you prefer. Not everyone is so lucky. At the same time, not everyone's who's lucky is successful so let's give the girl some credit. 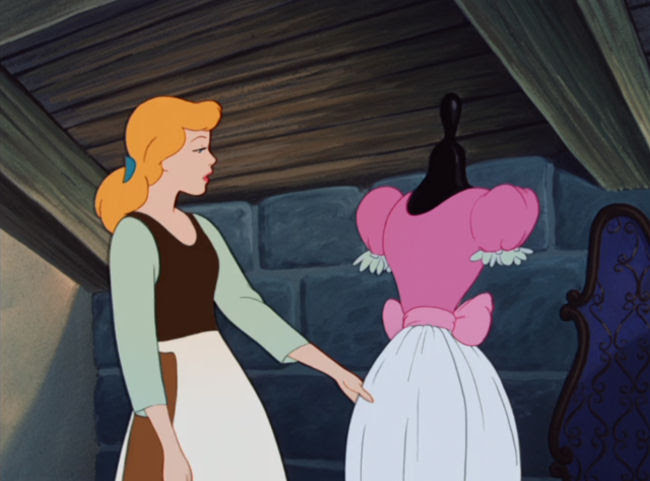 You may not always be able to attain your dreams but you certainly won't attain them if you don't have them to begin with--the Fairy Godmother tells Cinderella she's only able to appear because, even in her moment of deepest despair, Cinderella still has "faith" in her dreams.

Cinderella is available on Disney+.

Posted by Setsuled at 9:44 PM
Email ThisBlogThis!Share to TwitterShare to FacebookShare to Pinterest