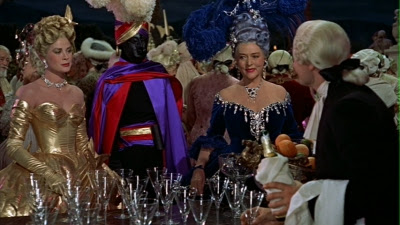 I finally had time to watch a movie last night. I've had a new copy of To Catch a Thief for weeks. My old copy was a much inferior print, and it's amazing how much a restored image improves the movie. In many ways, it explores some of the same issues of identity that Vertigo does, but in a much more playful manner. The allure of fantastic amorality both female leads see as being wrapped up with Cary Grant's John Robie character adds a wonderful excitement to their flirtations. Watching Grace Kelly breathlessly describe to Cary Grant all the things she imagines he is, all the excitement she imagines him feeling at the sight of the object on her chest, culminating in her placing his hand under it--it's all delightfully sexy. The inter-cutting images of fireworks are a little obvious, perhaps, and not quite as amusing as the train going into the tunnel at the end of North by Northwest, but I think it would have worked perfectly well with a Bernard Herrmann score. In any case, the scene's marvellous. 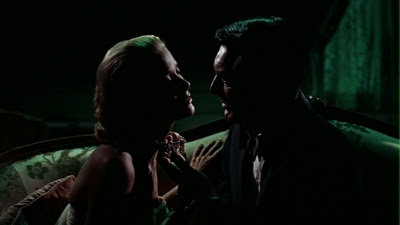 Kelly kissed Grant, pulled him into positions where he was on top of her, and otherwise emphasised a play masculine danger from him in relation to her, until it seems as though he's actually stolen something from her mother, and she immediately takes up a menacing phallic symbol; 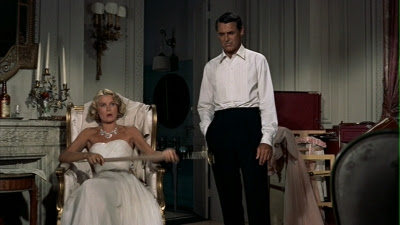 Attempting to leave no mistake as to who was in charge all along, but Grant's been playing these games for longer than she, and deftly escapes. For his part, all Cary Grant needs to do is be Cary Grant. He pulls it off wonderfully.

Although the character he plays, former burglar John Robie, is supposed to be thirty five years old, Grant's actual age at the time, fifty, seems to play a conspicuous role as he seems already to have long ago learned the lessons his two romantic interests, both of whom were half Grant's age, are confronting in the film. The avatar of the cat, and its appropriation by the girls from a sensationalising of Robie's very real criminality, is sort of sweet, but stops short of saccharine as the ending is somewhat about Robie learning to respect Francois' intelligence.

Francois' mother seems to appreciate a genuinely predatory quality Robie displays at the gambling table, and there's a subtle play between the romantic danger lusted after by youth and the freedom from morality appreciated by the mature. This is reflected, too, in Robie's revelation to the insurance man that most people are thieves in one way or another.

Anyway, as Hitchcock goes, the movie's ultimately pretty light weight, but thoroughly enjoyable.
Posted by Setsuled at 4:54 PM
Email ThisBlogThis!Share to TwitterShare to FacebookShare to Pinterest