I'm experimenting with my routine a little, trying to streamline it. I've decided to do my blogging only after I've drawn and inked a page for the day. I've also stopped working while eating, since I noticed it was making me eat much slower, and I probably therefore wasn't saving much time and simultaneously degrading the quality of my meals. I wasn't even able to finish my coffee before it got cold--Oh, I hate stale coffee. It's like a mockery of all that's good and pure in the world. 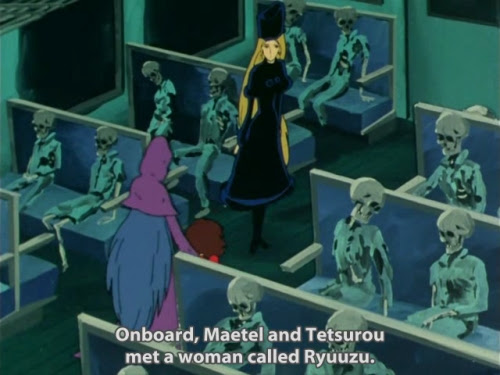 I love those skeletons. The scene sort of reminded me of the beginning of Alien--the image here is of an interstellar train that was trapped for three hundred years in a sort of black hole. It's from episode 8 of Galaxy Express 999, the second half of a two episode arc wherein the #999 is sucked into some kind of gravity well where an evil robotic woman disrupts the flow of time. Well, its put better by the episode title; "The Graveyard at the Bottom of Gravity". The robot woman, Ryuuzu, kidnaps Tetsuro and attempts to force him to become her husband or surrogate son in her creepy old house on a foggy planet. 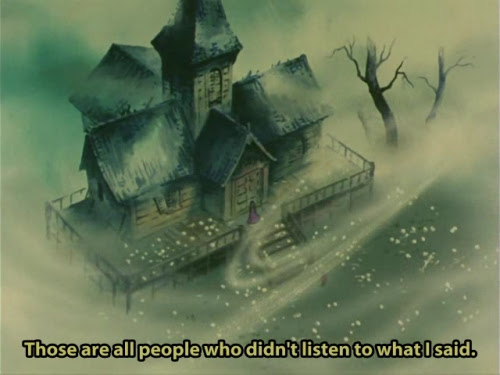 Over and over again in anime, I come across what seems to be an author's strange preoccupation with his mother. From Evangelion, to Final Fantasy VI (the best written of the series), it seems a lot of the best stuff in Japanese film, manga, video games, and television has to do with the artist attempting to deal with the death of a mother.

Galaxy Express 999 is about a young boy, Tetsuro, whose mother's murdered before she and him can travel to a distant planet where they both might obtain immortal robotic bodies. After his mother's killed, Tetsuro meets a mystery woman, Maetel, who helps him kill his mother's murderer and takes him along with her on the Galaxy Express 999, bound for the planet where one can apparently acquire a mechanical body.

More fantasy than Science Fiction, the show seems mainly to focus on what might almost be called perverted nostalgia, as sweet, sentimental memories of a youngster's train travels with his mother are twisted by the inclusion of murderous cyborgs, ghosts, and somewhat disturbingly ill-defined relationships. 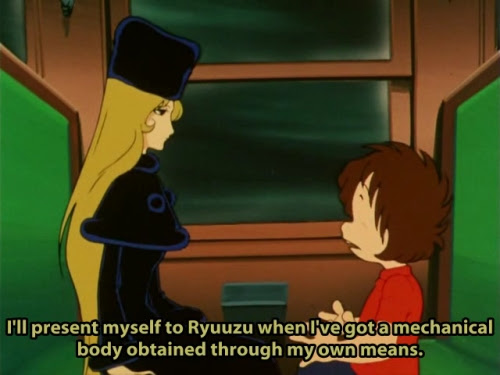 When Tetsuro begins to pray, shortly after being kidnapped, Ryuuzu tells him, "God doesn't exist here in space. Only the truth of all beings and the flow of time exist here."

It's a very fascinating, sweet, scary, and beautiful series. And I love Leiji Matsumoto's sort of art nouveau style, which clearly seems to've been an influence on another of my favourite manga and anime designers, CLAMP; 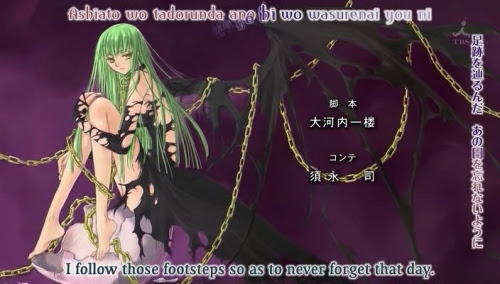 Yeah, okay, that was a flimsy excuse to post a picture of CC from Code Geass. Still. Have I mentioned I love CC from Code Geass?
Posted by Setsuled at 7:42 PM
Email ThisBlogThis!Share to TwitterShare to FacebookShare to Pinterest