This has to be one of the most disturbing images I've ever seen; 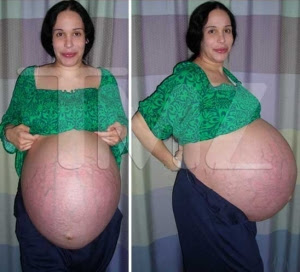 No, kids, you didn't see her in Aliens--it's the Octomom, the woman who artificially inseminated herself with six embryos but gave birth to eight babies to add to her already six baby strong brood. And, oh, by the way, she doesn't have the means to support them.

Now, I absolutely do believe, if she can't pay for the kids, the state ought to. Protecting kids who have nothing else to protect them ought to be the state's number one priority. But pumping vulnerable human lives out into the world willy nilly is fucking crazy. I mean, if you want to be Werner Herzog or Sacha Baron Cohen and live dangerous and crazy, that's fine, I'm okay with it, and in fact I love it. But playing with other people's lives like this is fucked up.

That she apparently has been moulding herself after Angelina Jolie is sad by itself, but putting that head on top of the baby mill, and what it implies by being there, just adds to the scary.

The woman is like a hybrid of one of the pod people from Invasion of the Body Snatchers and a human.

I watched the first part of the Exodus two-parter from Battlestar Galactica's third season last night. I'm enjoying it so far, though Sharon seems to be way too easy to manipulate.

At my parents' house now. I'm here to keep an eye on Saffy, who, after being spayed, would otherwise be alone her with a big plastic cone on her head. I can think of someone more deserving of being spayed . . .
Posted by Setsuled at 9:24 PM
Email ThisBlogThis!Share to TwitterShare to FacebookShare to Pinterest