Space on the Ground

I had to go to La Jolla for groceries to-day, so I took a picture of San Diego's Mormon Palace while I was there; 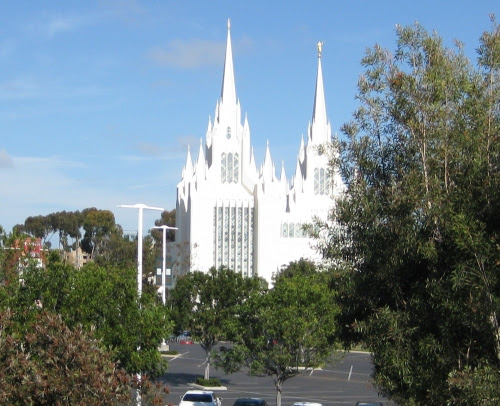 Yes, one of the most prominent groups responsible for denying gay people the right to marry in California has a gleaming, opulent white fantasy fortress in the city. It's even bigger than it might look from the photo--there's a freeway in a ravine between the parking lot and the palace.

Here's a close-up on the little gold man on the right spire; 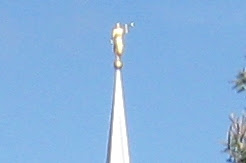 Tim and I have talked at length for years about what we'd do with the place if we ever became impossibly rich enough to purchase it. We've had ideas ranging from the simple banality of turning it into an office building or a haunted house for Halloween to making it our imposing and terrifying headquarters--we'd paint it black, of course. How different is it really from Barad-dur and Orthanc?

Apart from the expense of building and maintaining the place, the location itself probably cost a bundle--La Jolla is one of the most expensive places to live in San Diego--described by Wikipedia as "a wealthy seaside resort community". Isn't it nice knowing a religious group bent on eroding civil liberties is also phenomenally wealthy? Apparently there are lots of these places.

I watched the fourteenth episode of Battlestar Galactica's third season last night, which began with Helo welcoming aboard the continuing influx of refugees from, apparently, out of nowhere. Doesn't anyone wonder where these people are coming from? Not exactly a terrible episode, though it featured Adama behaving out of character again, courtesy this time of the show's many, many examples of dialogue added in post to over-explain things--this time it was Adama saying to Helo something like, "Do your job and don't make unfounded accusations". The scene worked better without it, as it wouldn't have been clear that Adama considered Helo's accusations about Dr. Robert (take a drink from his special cup) without merit, playing his feelings smarter and closer to his chest. The looped dialogue turned him into a silly little man.

If this is the first time you've read about looped dialogue, you can spot it often in Battlestar Galactica when the speaker's not facing the camera, his or her voice seems to take on a higher pitch for a moment, and he or she says something unrealistically straightforward for the benefit of a theoretically pea-brained audience.

It was nice seeing Colonel Tigh admit he was wrong at the end, though. Poor guy. He's always saddled with the wrong decisions, no matter what. He hated Laura Roslin, yet he had to help her fix the election because it was The Wrong Decision. He doesn't even have the right accent anymore.

St. Sisyphus mentioned to me how the writers seem to want to arbitrarily write characters as good or bad, depending on what modern event they want to enslave their narrative to. I replied;

They seem to do that a lot throughout the series. It's one of the reasons Baltar had tended to be the best character--he was set up to be someone morally ambiguous, so he's the only one who gets to make decisions based on what makes sense for his character rather than on whether or not the writers are currently considering him good or bad. The only consolation now is that, at least, if temporarily, they consider Roslin as stupid as I always do.
Posted by Setsuled at 4:46 PM
Email ThisBlogThis!Share to TwitterShare to FacebookShare to Pinterest