Mr. Luhrmann? Yeah, I've got Vegas on the phone. They want you and Hugh Jackman to open for Tom Jones.

I told you Jackman would sing, didn't I? Even I didn't think he'd be that bad, though. I guess I was glad to see Wall-E and Heath Ledger win, but the whole thing felt so low rent, it felt almost irrelevant. It was like a PBS telethon. I guess it was appropriate Jerry Lewis was there.

I couldn't even finish watching. I went to Tim's and played Fallout 3 for a while, though not for very long because I hadn't gotten much sleep the night before. I came back here and watched Late Chrysanthemums (Bangiku), a Mikio Naruse movie from 1954 starring Haruko Sugimura. 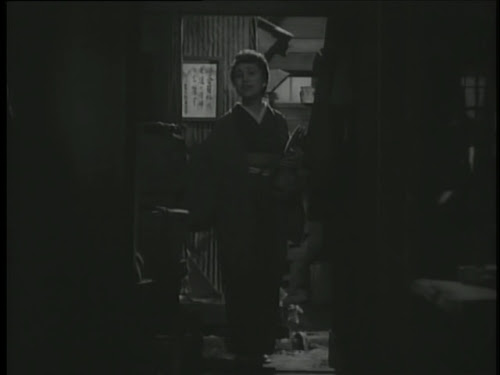 Sugimura seems to have been adept at either conveying deep wisdom with minimal expressions and gestures or a bitter, conniving personality. Kin, her character in Bangiku, seemed closer to the latter sort. She's one of four former geisha depicted in the film who are struggling in a world where the skills and means by which they formerly survived have been made irrelevant by their age and the influx of western culture. Three of the geisha are broke and have nothing to pass on to their children of modern sensibilities but sexual pragmatism and cynicism about the opposite sex. Kin is the only one of the four who's managed to retire comfortably, primarily because, in her youth, she'd honed her abilities as a shrewd moneylender, which also makes her the most cynical and emotionally inaccessible of the four. The best and most evocative scene in the film involves Kin meeting a former patron who's now fallen on hard times--she loved him in her memory, but now he's just another guy who wants money. Yet one suspects he hasn't actually changed all that much.

Not a bad movie, but far from Naruse's best. It touches on a few themes explored with much more subtlety and complexity in a film he'd make the following year, Ukigumo.

I also watched the twelfth episode of Battlestar Galactica's third season, which was definitely a good episode simply for the fact that it featured Helo pointing out to Roslin her really obvious, phenomenal, and callous stupidity. When she started trying to guilt trip him about letting Sharon go to the Cylon ship, I thought, "This is where the smack down should be." And, thank the gods, Helo brought it--you stole his frakking baby. Who are you to moralise?

Otherwise, a lot of the episode didn't make much sense. Boomer's finally back, with a completely different but plot convenient personality, taking us back towards baby killing territory. Apollo made a complete 180 from his dialogue momentum in the previous episode, deciding to endanger other people to rescue Starbuck after all. That's not so bad compared to Sam having a hard time deciding whether or not it was worthwhile for the civilians to fight, despite the fact that there were no other options.
Posted by Setsuled at 4:45 PM
Email ThisBlogThis!Share to TwitterShare to FacebookShare to Pinterest