While eating breakfast this morning, I read some of a webcomic called The Phoenix Requiem. It's the first webcomic I can remember reading that's made me feel at all jealous. Sarah Ellerton, the author, colours her pages extraordinarily well and somehow manages to update with two or three pages every few days. I honestly don't know how she manages it--if I dedicate one day to doing nothing but my comic, stopping only to eat three meals, I can maybe see myself drawing, inking, and colouring two particularly simple pages.

I bookmarked Phoenix Requiem months ago, but only to-day have managed to reach 82 of its 330 pages. I really don't know why I'm so terrible at reading webcomics. Really fantastic colouring, in any case. I could feel jealous about the linework, too, except I bet Ellerton doesn't have to draw all her pages on 9x12 pieces of paper.

After driving to several stores on Monday looking for the new Morrissey album, I discovered February 16 was only the U.K. release date. That's what I get for signing up for the U.K. newsletter. My sister called me yesterday to tell me she'd gotten the album--the 17th was apparently the U.S. release date--and that she liked it better than the previous one because it was more upbeat. Obviously, I'm not a guy who takes a positive outlook as necessarily improving work of art, but it is a good album. Not necessarily upbeat--more like making the best of a permanent, bad situation; a romantic person learning to accept life will never provide the love he needs, and being okay anyway. Mono no aware. Morrissey seems to be expanding his vocal skills with each album, too; he's hitting notes here I've never heard him hit before.

I'm tired to-day--I forced myself to wake up at 11am because I learned last night I'm going to need to get up even earlier on Friday because my sister and I are going to Disneyland. I wonder if we could possibly have as much fun as Tom Cruise's family evidently did at Disneyworld. 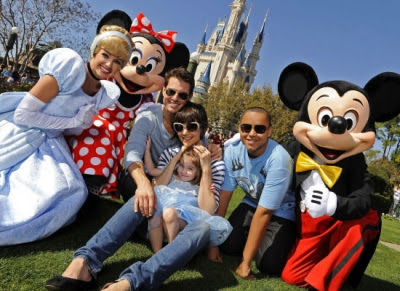 Is there any part of this picture that looks real? What if it is? What if these people are really this happy and perfect looking? It's kind of fundamentally terrifying. The soundtrack needs to be Ed Wynn singing "I Love to Laugh".

I watched the seventh episode of Battlestar Galactica's third season last night. My hatred for Roslin grows each day, but at least now I'm getting the feeling she's supposed to be a bit unlikeable.

It's interesting how it feels like we haven't really had any story from her POV in a long time--it seems like we used to get a lot of stuff about her dealing with the presidency foisted on her and her cancer, but now she's just the smug, religious edifice whose feet we see too much of. But, again, it never feels like we get as close to anyone as we do to Baltar. Not that I have a problem with that--there's enough conflict in that guy alone to fill a show.
Posted by Setsuled at 2:21 PM
Email ThisBlogThis!Share to TwitterShare to FacebookShare to Pinterest