I am the Boy Anachronism

I love this Jonathon Ross interview with Morrissey from 2004;

Those two seem to play really well off each other. Morrissey has the sensitivity and perpetual honesty of a rock star and the brutal irreverence of a comedian. It's a precarious balance, and a comedian is a perfect foil. I also came across this video of Ross coming onstage at a Morrissey concert with Russell Brand and David Walliams to apologise for Morrissey being unable to come back on stage due to a sore throat. So, I guess, despite what Mozzer said, the two did become something like friends. Not hard to believe--he's so cuddly in the interview. He looks so masculine these days, but in interviews he seems to turn back into a peevish little boy.

I was looking at photos of Disneyland from the 1950s this morning like these; 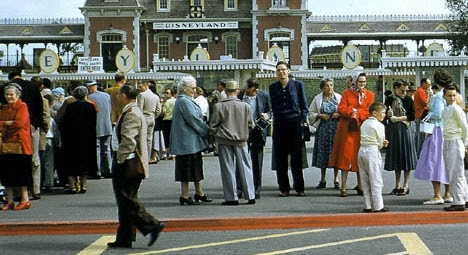 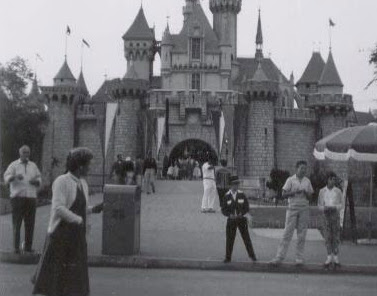 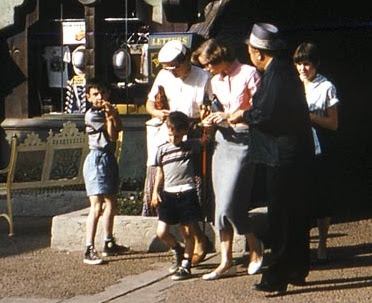 Compare to one I took on Friday; 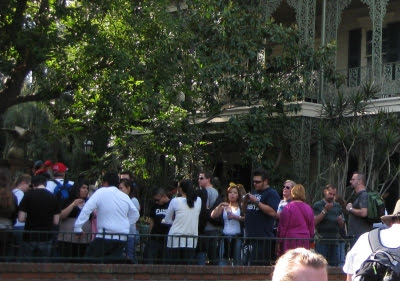 See what I'm talking about? I guess people wore pretty much what they were told in the 50s, too, but there was a higher standard. I lament the lack of imagination that prevents most people from realising that, once they're adults, they can wear anything, but if there's going to be a uniform, why not make it a good one? And the weight--if you're overweight because you enjoy food, more power to you, really. But I don't think that's what's happening here. I mean, people in the 50s ate all kinds of fat and red meat and yet I'm hard pressed to spot more than one person in any picture who's even slightly overweight. What's going into the human trough these days? I guess the unflattering clothes probably exaggerate the difference, too.

Oh, and here's another great thing about Disneyland that's not there anymore; 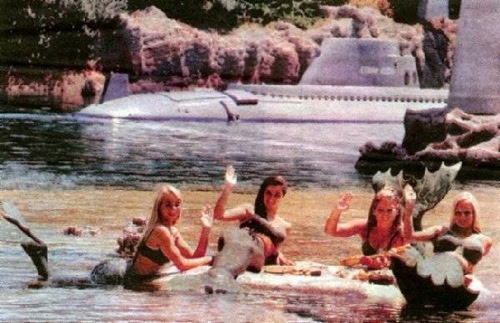 Mermaids! Disneyland needs mermaids. But I guess I could say that about anywhere.

To-night I'm going to my parents' house to watch the Oscars, though I still haven't seen any of the Best Picture nominees. If I do have a chance to get to a movie theatre in the next couple weeks, I'll probably see Coraline. I just can't feel enthusiastic about this crop of movies, and the omission of The Dark Knight just irritates me.

I caught up with Friday television yesterday--I guess Morrissey's right, American television does seem mainly aimed at children, but I still think Dollhouse has potential. I didn't technically glimpse much to encourage me on Friday's episode, but while I was watching, my mind wandered and I started thinking about how the personality imprints could be seen as a shorthand for how parents raise their kids and the idea of creating personalities by stimuli, how much responsibility parents bear, and the virtues and drawbacks in the whole process. The episode itself seemed partly crafted to reassure the audience that, yes, the show may be (gasp) weird, but don't worry, we're equipped to tell the old plot formulas your receptors have been conditioned to somnambulantly chant. In this case, "The Most Dangerous Game".

The new Terminator: The Sarah Connor Chronicles was a bit better--I was a little distracted by the fact that almost everyone at the funeral the episode was concerned with had faces familiar to me from other television shows, and John Connor's introduction to the girl was a little too self-consciously cute.

I have also been watching Battlestar Galactica the past couple nights--I watched episode ten of season three on Friday night, the first one written by Jane Espenson, and it had all the unabashed melodrama and utter humourlessness that characterised her work on the last couple seasons of Buffy, episodes I used to dread like baths in mucus, but in small doses she's not bad. Melodrama just means emotional drama created by a string of extremely unlikely events, after all, in this case the poor little drug addict who fakes her way into becoming a pilot only to save the day at the last possible moment and sacrifice her life in the process. It's okay in small doses, especially if you're in a Travis Bickle mood and you've decided to imagine the world's set against you.

I enjoyed the next episode more, though, especially since it involved Adama getting pissed off at Roslin while Roslin smiled blandly, wondering why anyone would be upset she stole a baby and gave it someone else.
Posted by Setsuled at 2:17 PM
Email ThisBlogThis!Share to TwitterShare to FacebookShare to Pinterest