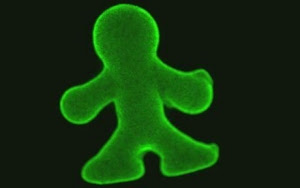 "Run, run, as fast as you can. You probably don't want to catch me, I'm the Cancer Cell Man."

"We swear there's a point to this!" say scientists from the University of Tokyo (I'm paraphrasing).

That's not good enough. I demand an AIDS golem.

I had a busy day yesterday and to-day looks like it'll be busier. I actually got a lot more useful things done with sleep deprivation yesterday than I did with the weird dim of Sunday.

That could be kind of a cool name for a story; The Weird Dim of Sunday. Almost sounds like The Weird Djinn of Sunday. It could be about a priest who discovers he has magical powers, causing a crisis in his faith. It would be "dim" because he loses the light of God, and "djinn" because it turns out he's a genie.

I watched the season finale of Battlestar Galactica's second season last night. I am getting really tired of the allegories. Looking at the Wikipedia entry for the series, I see they're not going to let up soon, either. I hope they at least get better at telling a good story at the same time.

The allegory annoys me even when it's a point of view I agree with, but turning Baltar into some kind of conglomeration of everything conservative pundits hate about Democrats is especially depressing. Not to mention the tortured loops of logic the writers were required to jump through to get there--at the start of the series, Gaius is someone who seems to regard his apparent heartlessness as a source of pride, but then he goes into an unrelenting, blind fit of rage when Roslin's letter accuses him of lacking compassion when he saved her life. Somehow this is supposed to be his motive for taking the presidency from her? No, whispers the intoxicating Cylon muse of allegory, it doesn't have to make sense, so long as we show he's, like, so into science and popularity that he'll stomp poor innocent religion and have sex in the oval office. Now aren't you glad Bush rigged the election? Heavy, man!

I watched the webisodes that take place between the second and third season this morning. First off, yes, the writer's strike was completely justified--these really are like miniature episodes of the show, and writers completely deserve to be paid for them. Bits of them were pretty good, too--I particularly liked the stuff about the New Caprica Police and the Cylon coercing people to join in to order to prevent bloodshed. I was fascinated by the fact that no matter what changes in the universe of Battlestar Galactica, Colonel Tigh remains the great source of bad ideas. In any situation, no matter what it is, if you leave decisions up to Tigh, he invariably makes the wrong one. Pancakes are good, but where's the syrup--"No!" says Tigh, "What the hell do you want syrup for?! We're not playing patty cakes." In the webisodes, the Canadian actor also seems mysteriously to be acquiring an Irish accent. Is he supposed to be Michael Collins now?

I'm not really clear on what the humans are doing on New Caprica. Chief Tyrol, who's looking scarily like Ernest Hemmingway with his new beard, is seen urging a strike in the season two finale. But a strike from what? What are these people doing? They're all living in tents after a year, they don't seem to have any crops except for some celery that turns up in a webisode. Did that come from a ship or the planet? How's food production going? Can someone please spare a moment to talk about the advantages and disadvantages of being on the planet? Doesn't anyone care about what motivates these people? And if they can't even build permanent shelters, why don't they go back to the ships? Maybe all this will be answered in the third season. Probably not before we get Frick Cheney building a nuke in Firan to save babies from molestation by Cyim Jong-Il. Frakking allegory.
Posted by Setsuled at 4:09 PM
Email ThisBlogThis!Share to TwitterShare to FacebookShare to Pinterest