Trouble sleeping again last night. I didn't have any alcohol yesterday, so I guess it wasn't the wine's fault. Good thing, too--I've been really into wine lately.

To-day was the first day in a couple weeks I didn't watch Revolutionary Girl Utena while eating breakfast. I'm not going to stop watching the show--I'm still enjoying it, but I felt like a change of pace this morning. Though the past couple episodes of Utena haven't been as interesting as some of the earlier episodes. It's kind of falling into the same trap Code Geass and a lot of other shows fell into--the moment the writers really started to do some interesting stuff, it seems like they panic and just "do what Evangelion did." Like the weight of ingenuity gets too heavy.

But even the uninspired episodes of Utena are good. It's still interesting to see the small ideas animators put into the characters. I think what designers and animators do for characters in animated series might be considered somewhat analogous to what actors do when creating characters from already written material. I like the boyish mannerisms given to Utena, and expressions on the stuck-up rich girl, Nanami. A couple days ago featured a recap of one of my favourite episodes, where Nanami's duped into wearing a cowbell because it's a very expensive, designer cowbell. And, of course, this happens;

Instead of watching Revolutionary Girl Utena to-day, I watched an episode of the remastered Cowboy Bebop. I read an article recently on Chud or Ain't It Cool News talking about the live action Cowboy Bebop movie Keanu Reeves wants to make and found it to be another of several articles I've read on the subject where the writer prefaced by saying he wasn't much of a fan of Cowboy Bebop. In this case, the guy talked about how he didn't see the "cool" supposedly associated with the show and how he found it sort of phoney. I actually remember sort of feeling that way myself about the series. I still kind of feel that way about the movie. In a way, it's kind of inevitable, I think, when one approaches it as a fan of actual bebop jazz, and the more freeform, organic quality that music has. Animation is by nature a much more calculated artform, and Yoko Kanno's music is inevitably going to have a more confined feeling. To appreciate Cowboy Bebop, one needs to come from the direction of animation and fantasy appreciation. The show's not trying to be jazz, it's using some of the associated jazz, western, and martial arts aesthetic to enrich a futuristic fantasy setting. A lot of it's subjective, of course. I don't think if I hadn't watched the entire series and grown to love the characters I'd actually much dig Yoko Kanno's homages to Charlie Parker and Vangelis. But now I can listen to her music and actually enjoy it.

The best thing about Cowboy Bebop to me, though, is its texture. Even fast paced action and chase scenes are filled with tiny bits of character thrown at the screen at lightning speed. Spaceships, martian colonies, and wormholes are all well-worn science fiction concepts, but Cowboy Bebop fills them out with a collage of cultural information that comes out with the messily organic tone of millions of people going about their daily lives with this technology. 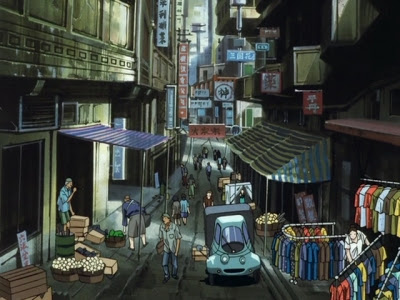 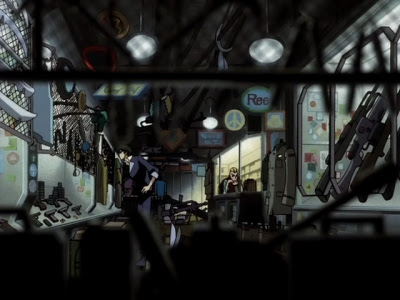 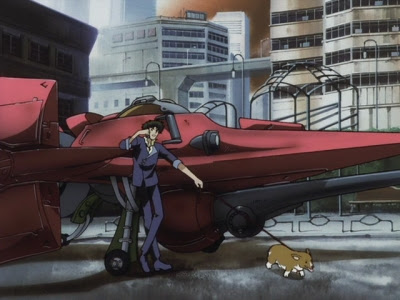 I watched the season premiere of Battlestar Galactica's third season last night. Someone needs to tell those Cylons that they'll catch more humans with honey than they will with vinegar. What's the point of what they're doing now? Learning how to love? Make babies? Teach the humans to be more peaceful? It's all pretty muddled. Starbuck looks good with long hair, though.
Posted by Setsuled at 4:03 PM
Email ThisBlogThis!Share to TwitterShare to FacebookShare to Pinterest