The Big Feathers Stand Out 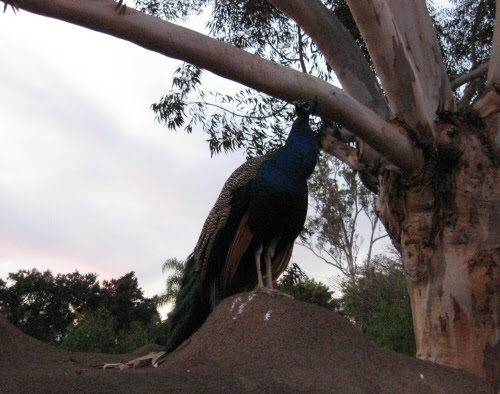 I went to the zoo to-day--my mother had gotten me a zoo pass for my birthday in April, and so far I'd managed to go only once. I figured I'd better get in at least one more quality visit this year--I'll post more pictures and video to-morrow. I saw some weird shit this time.

But, for now, as you can see, I had another peacock encounter. I'd thought maybe the one I saw wandering around the road earlier this year (seen below) had escaped from some pen;

But I guess they're just allowed to roam the park because I encountered two to-day, the first sitting coolly on the rock there, letting people take pictures, even people using the flash on their cameras. The second one I ran into was in the middle of a big crowd, in the path of a bus, forcing the vehicle to stop. On instinct, I stepped back, knelt down, made clucking noises with my tongue and tapped the ground with my fingers, the way I sometimes do when I want to get a cat to come to me. To my surprise, the peacock did walk right up to me, out of the path of the bus which immediately resumed its route. So yes, quite tame.

I can't believe how much I've gotten done to-day. I worked on the new Venia's Travels until 4:30am, having worked on it all day since the maids woke me up at 11am. Then, to-day the insurance of the guy who'd hit my car a few months back decided to start sending calls my way at 11am. At least now I have an appointment to get it fixed and the guy's accepted full responsibility.

I coloured almost all eight pages yesterday, having finished with pencil and ink on Wednesday. I know Christmas is right in the middle of my schedule for chapter 41, but I'm hoping it won't be such a painful experience as 40, especially since I got an early start on the script last week.

All payments accepted but most of them.
The sink motion sensors ignore my hands.
Happy phantoms open doors on a whim.
Consumer ghosts are alone in grey lands.
Whiskey, save us from the poisoned water.
Or boil it in a ruined bathroom.
Salmon sashimi's a raw mad martyr.
Red silly string of fate is on the loom.
Unpainted cars start in the late evening.
Only one person would call after six.
The slow grapefruit might just now be winning.
A gold alarm ambivalently ticks.
Yellow oceans now flavoured with lemon.
Peacocks are significant among men.
Posted by Setsuled at 7:07 PM
Email ThisBlogThis!Share to TwitterShare to FacebookShare to Pinterest